<p>It’s a busy time of the month for central bankers, and the BOJ will be the first major central bank to draw traders’ attention this week. </p>

It’s a busy time of the month for central bankers, and the BOJ will be the first major central bank to draw traders’ attention this week.

After cutting interest rates to -0.1% at its last meeting in January, most analysts expect the BOJ to remain on hold and continue to evaluate the impact of its last move this time around. It’s worth noting that, like the ECB last week, the BOJ’s easing actions did not result in yen weakness as the textbook would dictate; instead, after an initial dip, the yen has appreciated dramatically across the board. While the BOJ ostensibly focuses only on the "real economy" and not on currency moves, the failure of the yen to react "as expected" should prompt the BOJ to deeply consider the pros and cons of additional easing. Indeed, January’s changes were already contentious, passing with a slim 5-4 majority of BOJ members, so the appetite for additional easing tonight may be lacking.

Though few market participants expect any policy changes this month, the BOJ could still be forced to act later this year. The central bank’s elusive 2% inflation target is looking less and less likely as time goes on (the most recent inflation figures showed that price gains are actually slowing, from 1.3% in January to 1.1% in February) and with ongoing weakness in emerging markets and a relatively strong yen, the prospect of an imminent pickup in price pressures is bleak. As it currently stands, we believe the BOJ will remain on hold this month, but may look to ease policy further at one of its upcoming meetings in April or July, once policymakers have an opportunity to update their economic forecasts and new, more dovish board members can be appointed.

Assuming the BOJ doesn’t shock traders for the second consectutive time, USD/JPY’s fortunes this week will depend more on the US economic outook than happenings in Japan. In particular, the US Retail Sales and PPI reports tomorrow, as well as Wednesday’s CPI report and Fed meeting, could exert a big influence on the subdued pair.

Looking at the chart, rates are approaching the top end of the 1-month range from 111.00 up to 114.50. If bulls are able to overcome the top of this range at 114.50, a continuation toward long-term previous-support-turned-resistance at 116.00 could be in play. On the other hand, a reversal lower off 114.50 resistance would suggest that the near-term range is likely to hold for another week. 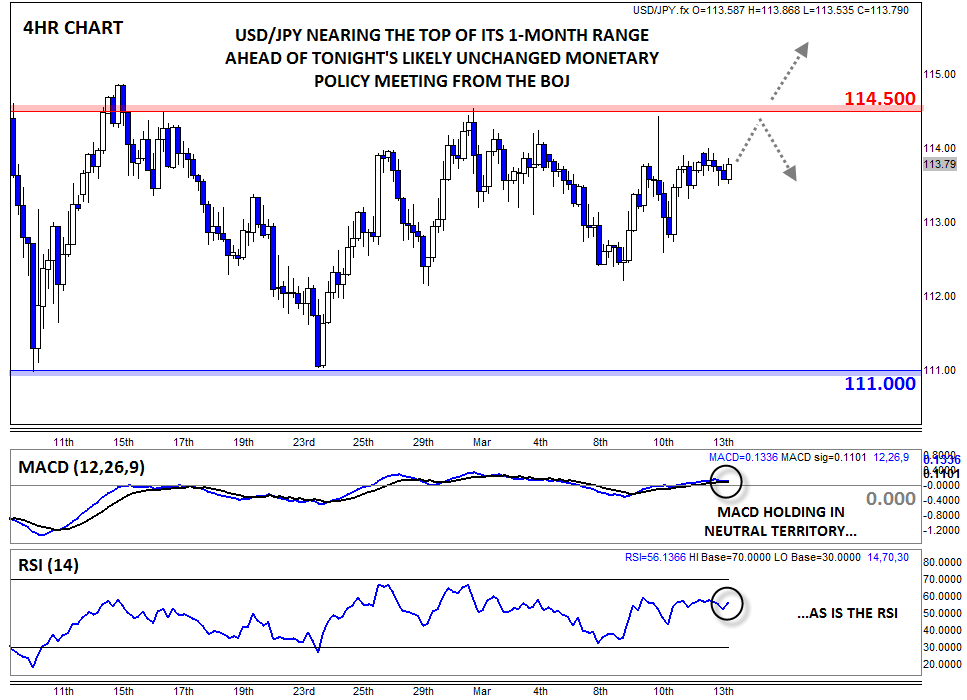