USD/JPY remained supported on Monday ahead of an important week for central banks. In the past two weeks, the Bank of England (BoE) and European Central Bank (ECB) used their time in the spotlight by keeping monetary policy unchanged, signaling a wait-and-see approach to the continuing saga of post-Brexit consequences.

USD/JPY remained supported on Monday ahead of an important week for central banks. In the past two weeks, the Bank of England (BoE) and European Central Bank (ECB) used their time in the spotlight by keeping monetary policy unchanged, signaling a wait-and-see approach to the continuing saga of post-Brexit consequences. The BoE was expected to implement new stimulus measures as a response to Brexit, but surprised markets by opting for inaction, sending sterling temporarily higher. The ECB was not expected to announce any further easing for the time being, and fulfilled those expectations. Both central banks, however, are expected to introduce more easing plans in the coming months.

This week pivots from Europe to the US and Japan, as the FOMC rate decision from the Federal Reserve will be announced on Wednesday afternoon while Friday will see the release of the Bank of Japan’s (BoJ) monetary policy statement.

While the Fed is not expected to raise interest rates this time around, it could very likely display a more hawkish tone than it had previously due to a spate of better-than-expected US economic data in the past several weeks that have helped boost the perceived probability of a rate hike this year. Also potentially contributing to a more hawkish tone should be the fact that concerns over the impact of Brexit on the US economy have diminished dramatically, as the US equity markets have recently hit progressively higher all-time highs.

Meanwhile, there are expectations that the Bank of Japan will institute more easing measures on Friday, in-line with assurances made by Prime Minister Shinzo Abe within the past few weeks. Despite recent reports that the BoJ might opt for inaction along the lines of the BoE and ECB, Abe’s strong push for further stimulus is likely to lead to some central bank action.

The dynamics of these two major policy decisions this week should have major implications for the USD/JPY currency pair. Since its post-Brexit lows around the key 100.00 psychological level, USD/JPY has been in strong rebound mode as the dollar regained its strength while the safe haven appeal of the yen quickly faded as Brexit-driven volatility died down. In the course of this rebound, the currency pair broke out above key resistance levels, including 103.00 and 105.50. Last week, USD/JPY rose towards its major 108.00 resistance target but was unable to reach it before pulling back.

Even in the absence of a Fed rate hike, a more hawkish Fed combined with additional BoJ easing this week could prompt a strong further surge for USD/JPY. The upside level to watch continues to be at the noted 108.00 area. Any breakout above 108.00 should target the next major upside resistance objectives at 111.00 and 114.00. In contrast, any failure by the BoJ to act and/or steadfast dovishness from the Fed could lead to a sustained breakdown below key support at 105.50. In this event, the next major downside target is at the 103.00 support level. 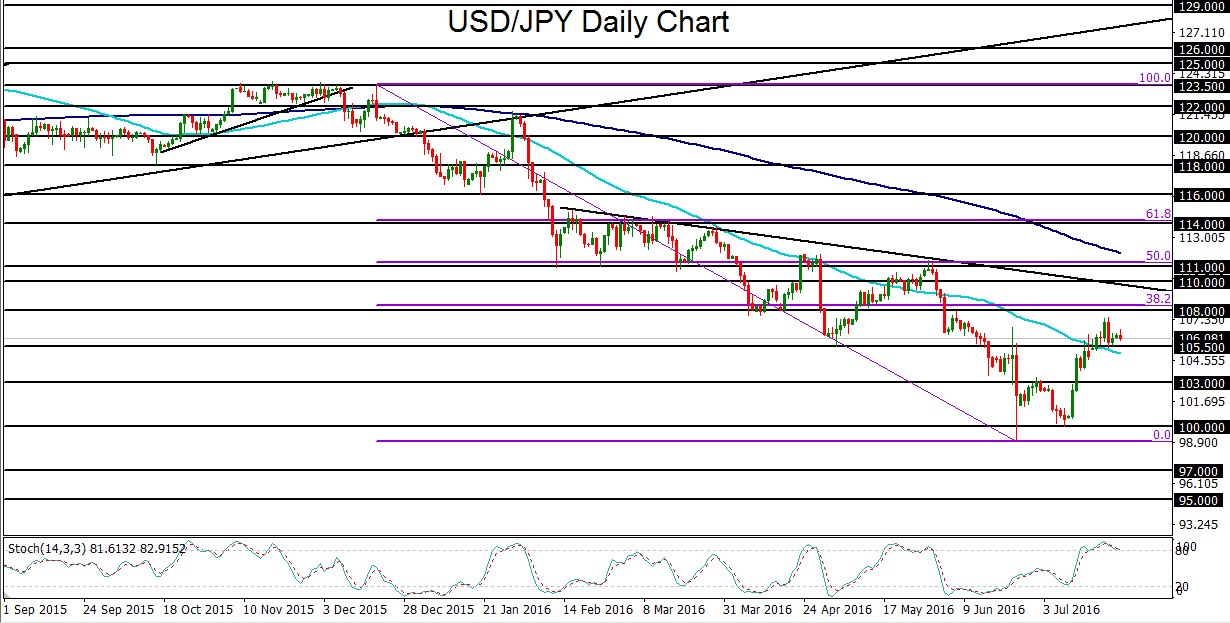