<p>It’s been a rough month for the Bank of Japan. In an effort to inject some much-needed inflationary pressures into the world’s third-largest economy, Japan’s central bank opted to join the negative interest rate club in late January, likely anticipating that it would lead to continued to depreciation in the Japanese yen as a side benefit. As it turns out, that hope couldn’t have been further from the market’s actual reaction.</p>

It’s been a rough month for the Bank of Japan. In an effort to inject some much-needed inflationary pressures into the world’s third-largest economy, Japan’s central bank opted to join the negative interest rate club in late January, likely anticipating that it would lead to continued to depreciation in the Japanese yen as a side benefit. As it turns out, that hope couldn’t have been further from the market’s actual reaction.

The initial post-interest-rate-cut spike in USD/JPY stalled out the next day just below 122.00, and the pair has since fallen by more than 1,000 pips to a low near 1.1100 in the last four weeks. While we saw a brief oversold bounce last week, the price action so far this week suggests that the Japanese economy may be in for more near-term pain before things get any better.

Overnight, a couple of top-tier Japanese policymakers were on the wires, essentially acknowledging the recent market volatility and expressing confidence in the underlying economy, as central bankers are wont to do:

Far more than the overnight attempts at jawboning though, the value of the yen is being driven by global risk sentiment. With major European and Asian equity indices ticking lower, we’re seeing a kneejerk flow of capital toward USD/JPY.

Turning our attention to the chart, USD/JPY is on track for its lowest close since October 2014. It now appears that the early week oversold bounce is well and truly behind us, and bears may look to push the unit lower in the coming days, especially if risk sentiment remains weak. The secondary indicators also point toward the potential for more weakness, with the MACD trending lower below both its signal line and the "0" level, while the RSI indicator is subdued, though not quite oversold yet.

At this point, the biggest risk to the short-term bearish outlook is the potential for intervention by the Bank of Japan. The last time we saw persistent safe haven demand for USD/JPY back in 2010-11, the Bank of Japan intervened to (temporarily) drive the pair sharply higher on four separate occasions, thought the USD/JPY rallies were quickly reversed. This time around, traders and analysts feel that the risk of intervention will rise dramatically if/when USD/JPY approaches the 1.10 level, so readers may want to keep an eye on that key level.

As is always the case, there are risks to any outlook, but from a purely technical perspective, it looks like USD/JPY bears are regaining the upper hand after last week’s bounce. 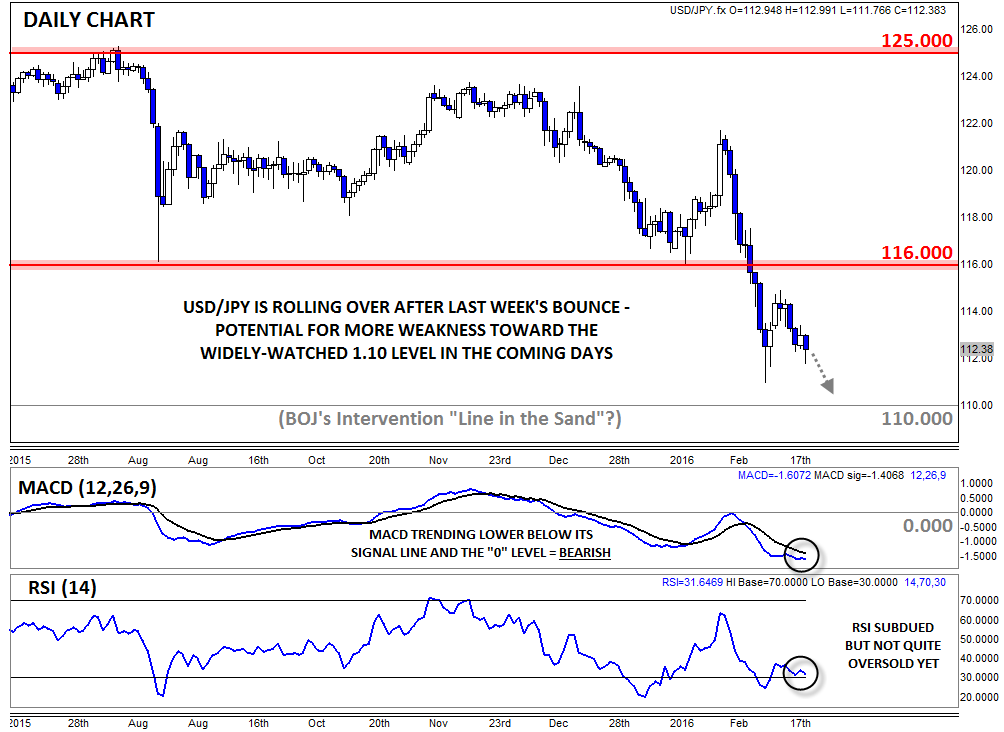