USD/JPY reached major resistance around the 103.00 level on Tuesday, establishing a new one-month high. This rise was driven both by a continued strengthening of the US dollar on increased expectations of a more-hawkish Fed, along with an extended pullback for the Japanese yen.

USD/JPY reached major resistance around the 103.00 level on Tuesday, establishing a new one-month high. This rise was driven both by a continued strengthening of the US dollar on increased expectations of a more-hawkish Fed, along with an extended pullback for the Japanese yen.

The relatively hawkish comments from both Federal Reserve Chair Janet Yellen and Fed Vice Chair Stanley Fischer last Friday kept alive the possibility of a September rate hike as well as the probability of at least one hike by the end of the year. This raised market expectations of near-term Fed tightening, boosting the dollar further. As Fischer reiterated once again that rate hike probabilities “are not things we know until we see the data,” the focus this week has shifted back to key US economic releases in the run-up to the September FOMC meeting three weeks from now.

On Tuesday, US consumer confidence data came out significantly better-than-expected at 101.1 versus the prior forecast of 97.2. This was the highest reading in nearly a year, which gave another small boost to the outlook for a Fed rate hike as well as a significant boost for the dollar.

Coming up on Friday, the potentially pivotal US jobs report will be released. Given that the labor market is a critical component of the Fed’s policy decisions, Friday’s non-farm payrolls outcome will be critical in impacting the Fed’s September decision. The current expectation is that the US added around 185,000 non-farm jobs in August. If the actual data once again exceeds these expectations, as it has in the previous two months, the probability of a September rate hike will very likely increase and the dollar should continue to strengthen.

Aside from this dollar strength, USD/JPY has also been impacted by a weakening Japanese yen. Both in the recent Jackson Hole Economic Symposium as well as in subsequent statements, Japanese officials have continued to stress Japan’s readiness and willingness to implement further stimulus measures in order to combat unwanted yen strength. It could very well turn out that this may not be necessary in the near-term if USD/JPY continues to be driven higher by a strongly rebounding US dollar.

From a technical perspective, USD/JPY has reached key resistance around the 103.00 level as of Tuesday, after having rallied for the past week from the major 100.00 psychological support level. Any sustained relief rally from that support level would likely be contingent upon a continued breakout above 103.00, which could indicate a bottoming out of USD/JPY. In this event, the next major upside target is around the 105.50 resistance level, followed further to the upside by the key 108.00 level. 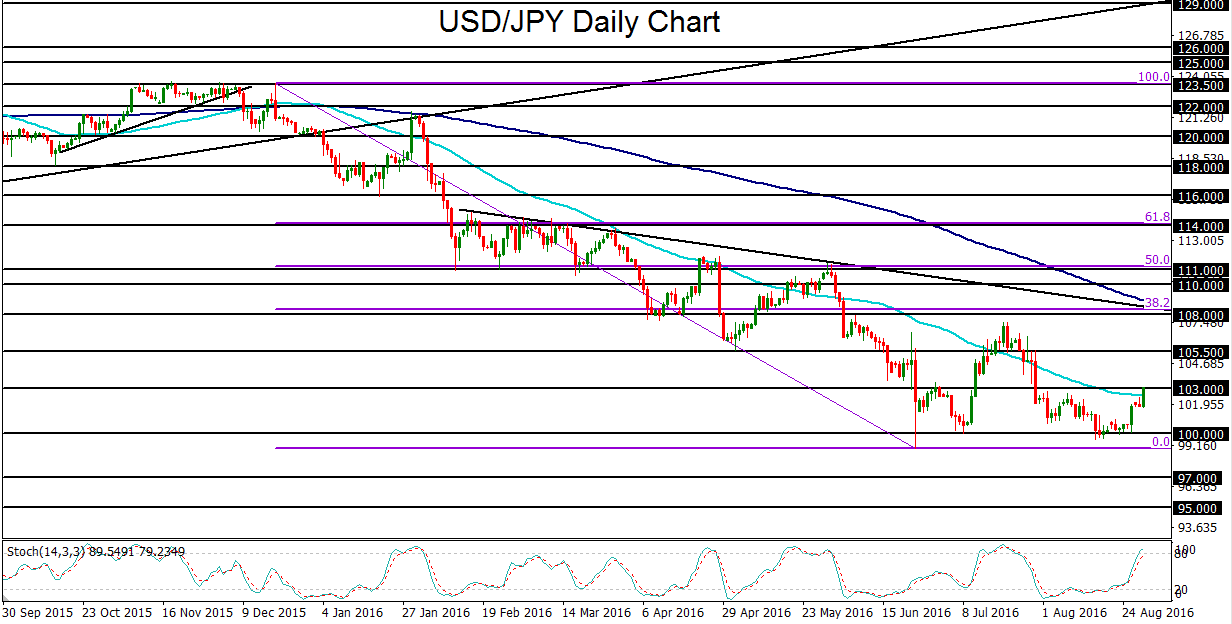