Although the US dollar was flat-to-lower overall on Wednesday, USD/JPY saw a strong surge as the Japanese yen fell broadly and sharply on higher risk appetite.

Although the US dollar was flat-to-lower overall on Wednesday, USD/JPY saw a strong surge as the Japanese yen fell broadly and sharply on higher risk appetite. The yen is typically viewed as a safe-haven currency, which tends to rise in demand when markets are fearful (“risk-off”) and fall in demand when markets are confident (“risk-on”). Markets for most of Wednesday were certainly risk-on, as surging crude oil prices in the aftermath of US President Trump’s withdrawal from the Iran nuclear deal also helped provide a strong boost to equities. Safe-haven assets like gold and the yen, in contrast, saw little demand, and consequently were pressured.

In the case of the yen, the Japanese currency dropped on Wednesday against all of its major counterparts, including the euro, pound, and dollar. While the US dollar index has spent the past three weeks rallying with very little interruption against a basket of major currencies, USD/JPY has been rising somewhat more jaggedly during the same period, as the yen has asserted itself at times. Most recently, this produced a pullback for the currency pair late last week into early this week. On Wednesday, however, the combination of a flat dollar and a falling yen prompted USD/JPY to rise in a recovery from the pullback and attempt a resumption of its recent rally.

From a technical perspective, USD/JPY has risen along a sharp uptrend support line extending back to its recent lows around 104.65 back in late-March. On Wednesday, the currency pair’s sharp surge prompted a clear bounce off that trendline. Currently, if this rising trendline is to continue, USD/JPY faces some key resistance areas immediately to the upside. First, there is the 110.00-area high from a week ago. Closely above that, the 200-day moving average looms. Slightly above that, is a descending trend line going back to the 114.72 high of last November. If the currency pair does indeed continue to rise and overcome these resistance barriers, the next major upside target resides around the 111.00 resistance area. 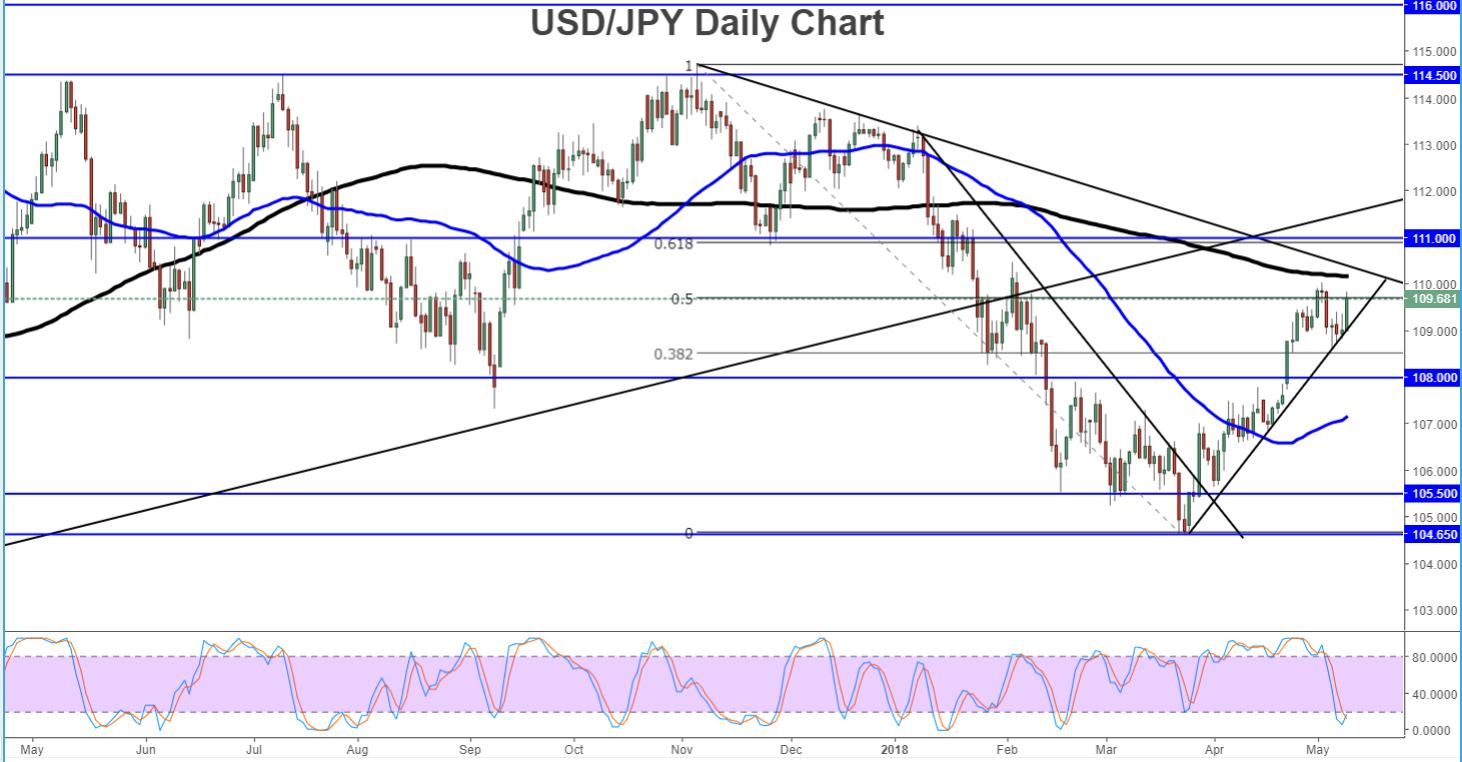