USD/CAD Drops Back Below 1.30 as NAFTA Optimism Abounds

A little over a week ago, we noted that USD/CAD could continue to gain ground because, “there had been little in the way of progress on a new NAFTA deal with negotiations entering ‘crunch time’ a mere 63 days until the US midterm elections” (see “USD/CAD’s Big Breakout Has Bulls Eyeing June’s Peak” for more). Over the last eight days, that outlook, or at least traders’ perception of it, has changed dramatically.

Adding to the steady drumbeat of upbeat rhetoric around getting a NAFTA deal done, Mexican negotiator Guajardo noted that he sees a “high chance” of a US-Canada trade deal. According to Guajardo, another Mexican negotiator is heading to Washington DC to iron out the details. That said, it’s not all sunshine and butterflies for the NAFTA talks, as Canadian PM Trudeau once again emphasized that no NAFTA deal would be better than a bad deal for Canada. According to a Reuters (citing unnamed Canadian sources) the most optimistic scenario would be for a deal in principle next week, so expect the headlines and negotiations to carry over into the weekend at a minimum.

Beyond NAFTA, traders have a couple of other reasons to be bullish on the loonie. For one, the weekly oil inventory figures from both the EIA and API showed big drawdowns in oil inventories, pushing the price of Canada’s most important export up 4% from Monday’s close as of writing. In addition, market participants are starting to turn their eyes toward the Bank of Canada’s meeting next month, where the swaps market is pricing in about an 85% chance that the central bank will raise interest rates again. With the BOE, ECB, BOJ, and other major central banks likely on hold through the remainder of the year, the BOC’s hawkishness is supporting the loonie.

Turning our attention to the chart, USD/CAD saw what ultimately turned out to be a false break above 1.3175 resistance last week. Rates formed a large “bearish engulfing candle on Thursday before dropping off sharply over the last two days. With the near-term technical momentum and fundamental tone both pointing toward more loonie strength, USD/CAD bears may seek to push the pair toward last month’s 3-month low near 1.2900 next (that is, barring another big shift in rhetoric surrounding the ongoing NAFTA talks!). 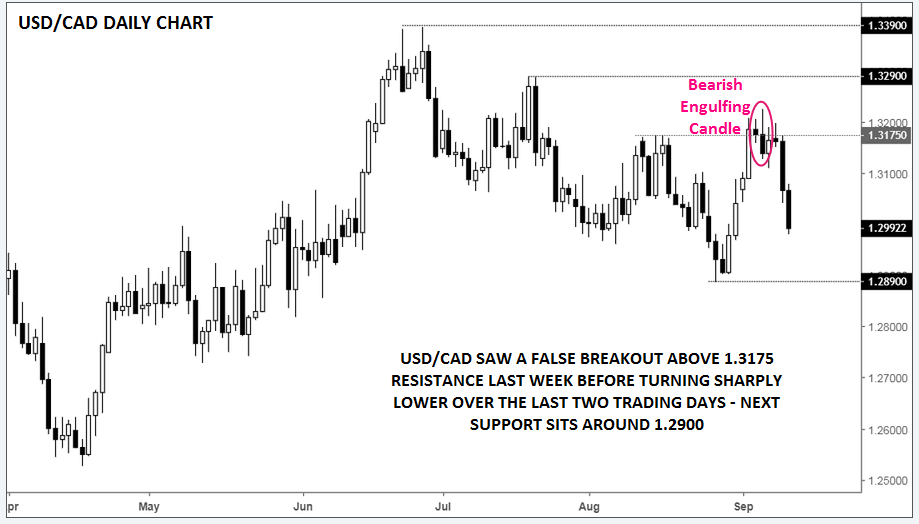