Employment figures from both North American nations will be released later on today and for that reason the USD/CAD could be in for a wild ride...

Employment figures from both North American nations will be released later on today and for that reason the USD/CAD could be in for a wild ride. Given the mostly negative leading indicators, most analysts expect to see a weak headline US nonfarm payrolls figure. But if it meets expectations (182,000) or surprises to the upside then US dollar may stage a short-covering rally as most of the negativity may already be priced in. The dollar bulls will certainly want to see a bigger-than-expected rise in the average hourly earnings index. But at 0.3% m/m, expectations are running high and as such the scope for disappointment is there. Meanwhile Canadian employment figures are expected to have risen last month at a slower pace of 13,000 compared to last month’s 45,300 figure. However, if the Canadian employment data again surprises to the upside then the CAD could rise sharply, given that the Bank of Canada has turned hawkish and inflation indicators have been strong recently.

But it is clear from the USD/CAD’s price action this week that there was quite a bit of profit-taking in this pair after its recent sharp falls, as speculators awaited the release of today’s jobs figures. The close today will therefore be very important as it could provide us a clear indication about next week’s most likely direction. For now, the bulls would point to the fact the recent breakdown attempt below last year’s low at 1.2460 clearly failed, and that given the extent of the past declines, this should mean that the USD/CAD is now going to go higher. The bears would argue that this week’s gains mere represent an oversold bounce as bearish speculators banked profit ahead of a key risk event (today’s data).

Given this uncertainty we are holding a neutral bias at this stage. However, a potential close above last week’s high at 1.2576 would probably mark a break in market structure, in which case, the USD/CAD could go higher in early next week. However, a daily close significantly below 1.2576 would suggest the move above last week’s high was a mere stop raid rather than a market structure break. In this case, a quick return to the bottom of the range at 1.2425-1.2460 area would then not come as surprise to us. Indeed, we would then expect to see a further breakdown below this support range in the days to come. In this potential scenario, the bearish bias would well and truly be re-established again. 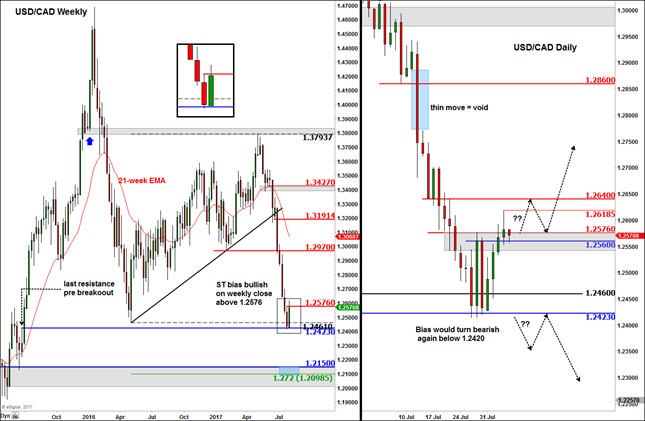