There’s been some interesting moves in the markets this morning, in what is the last trading day of the week and month. But it remains to be seen whether there will be further follow-through in these moves once we head into the US session.

There’s been some interesting moves in the markets this morning, in what is the last trading day of the week and month. But it remains to be seen whether there will be further follow-through in these moves once we head into the US session. After all, it has been a very choppy week and we wouldn’t be surprised if the markets were to reverse, especially equities. If stocks do fall back then this will probably undermined the USD/JPY and potentially weigh on risk-sensitive commodity currencies as well.

But in the first half of Friday’s session, crude oil prices had extended their gains, helping to fuel a bit of a rally in the Canadian dollar, with the Aussie also helped along by rebounding metal prices. The other major commodity currency, the New Zealand dollar, was still reeling from the dovish RBNZ rate statement released in midweek. Meanwhile the rebounding stock markets had helped to fuel a rally in the USD/JPY and other yen crosses as the safe haven currency lost some interest, even though we had some stronger economic data released from Japan overnight. But it remains to be seen whether the USD/JPY will be able to extend its gains due to the ongoing stock market volatility and as it tests major resistance in the 110.50-111.50 area.

Despite the USD/JPY’s gains, the US dollar was trading lower against other currencies. The euro was the strongest in G10 currencies at the time of writing. The EUR/USD was helped along by mixed-bag Eurozone data and after the EU reached a deal on how to handle the inflow of migrants. The pound also found some much-needed support after revised figures showed the economy had expanded at a slighter faster pace in the second quarter than expected.

Again, we are sceptical of these moves as it is the last trading day of the month and fundamentally not much has changed, with Brexit continuing to weigh on sentiment in the UK.

Below is a recap of today’s economic data and expectations for North American data later:

US (coming up later):

Among the majors, the USD/CAD is now in focus ahead of the North American session. The Loonie has been underpinned by rising crude oil prices with WTI hitting a fresh high for the year yesterday, while the US dollar has fallen amid month-end profit-taking. While we are not so sure oil will be able to hold onto its gains, the USD/CAD has nonetheless formed a short-term double top pattern which points to a potential correction of some sort. However, as the trend is still bullish we are only looking for a modest pullback at this stage. Indeed, the bears will be in trouble should the USD/CAD go back above the short-term pivotal level of 1.3270/80 which is the base of the recent breakdown. If that were to happen, don’t be surprised to see a subsequent rally back to the 1.3390-1.3450 resistance area. But if the 1.3270/80 area offers strong resistance then rates may drift further lower in the short-term outlook. Key support comes in at 1.3120 with 1.3050 also being a strong level. We would drop our long term bullish bias in the event the USD/CAD goes below 1.2950, the base of the breakout. 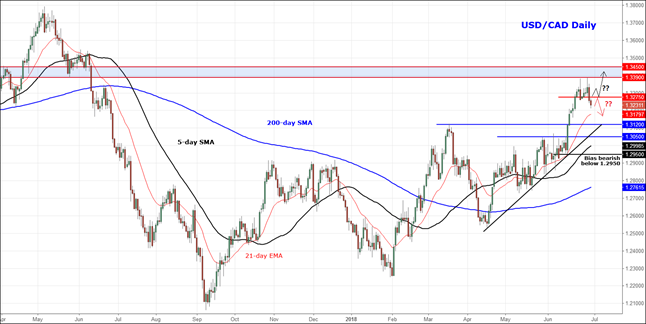