USD/CAD Poised to Breakout with BOC on Tap

The BOC may strike a slightly more dovish note at tomorrow’s meeting...

Heading into tomorrow’s Bank of Canada interest rate decision, traders are not expecting much in terms of tweaks to monetary policy. In fact, the market-implied odds of a rate cut are near zero, so any market reaction is more likely to hinge on the central bank’s forecasts for GDP and inflation over the coming year.

Ostensibly, the outlook for the Canadian economy has improved in recent weeks. After all, the official signing of the USMCA trade deal and the trade war “truce” between the US and China have removed a big element of uncertainty for the export-dependent sectors of Canada’s economy. Meanwhile, Canada’s big employment report earlier this month showed a stellar 35.2K net increase in employment and saw the unemployment rate drop 3 ticks to 5.6%, near its lowest levels since the mid-1970s. At the same time, CPI inflation has ticked up to a bit above 2.0%, exactly where major central banks like to see it.

Despite the relatively solid economic performance, the Canadian economy remains stuck in first gear, with annualized GDP growth printing in the 1.5%-2.0% range in each of the past six quarters. Given the lackluster headline growth and recent strength of the Canadian dollar, which is testing multi-year highs against the US dollar and other major rivals, the BOC may strike a slightly more dovish note at tomorrow’s meeting. If the central bank downgrades its outlook for growth or inflation this year, or notes that its watching the recent strength of the Canadian dollar closely, the loonie may drop against its major rivals.

Focusing on USD/CAD specifically, rates have been trapped in a tight 50-pip range between 1.3030 and 1.3080 for the past two weeks. While this recent extraordinarily tight range has not been particularly compelling for traders, it’s important to remember that volatility is cyclical, meaning that the current low-volatility conditions could set the stage for a potentially explosive move in the coming days, with this month’s BOC meeting serving as a potential catalyst for a strong move: 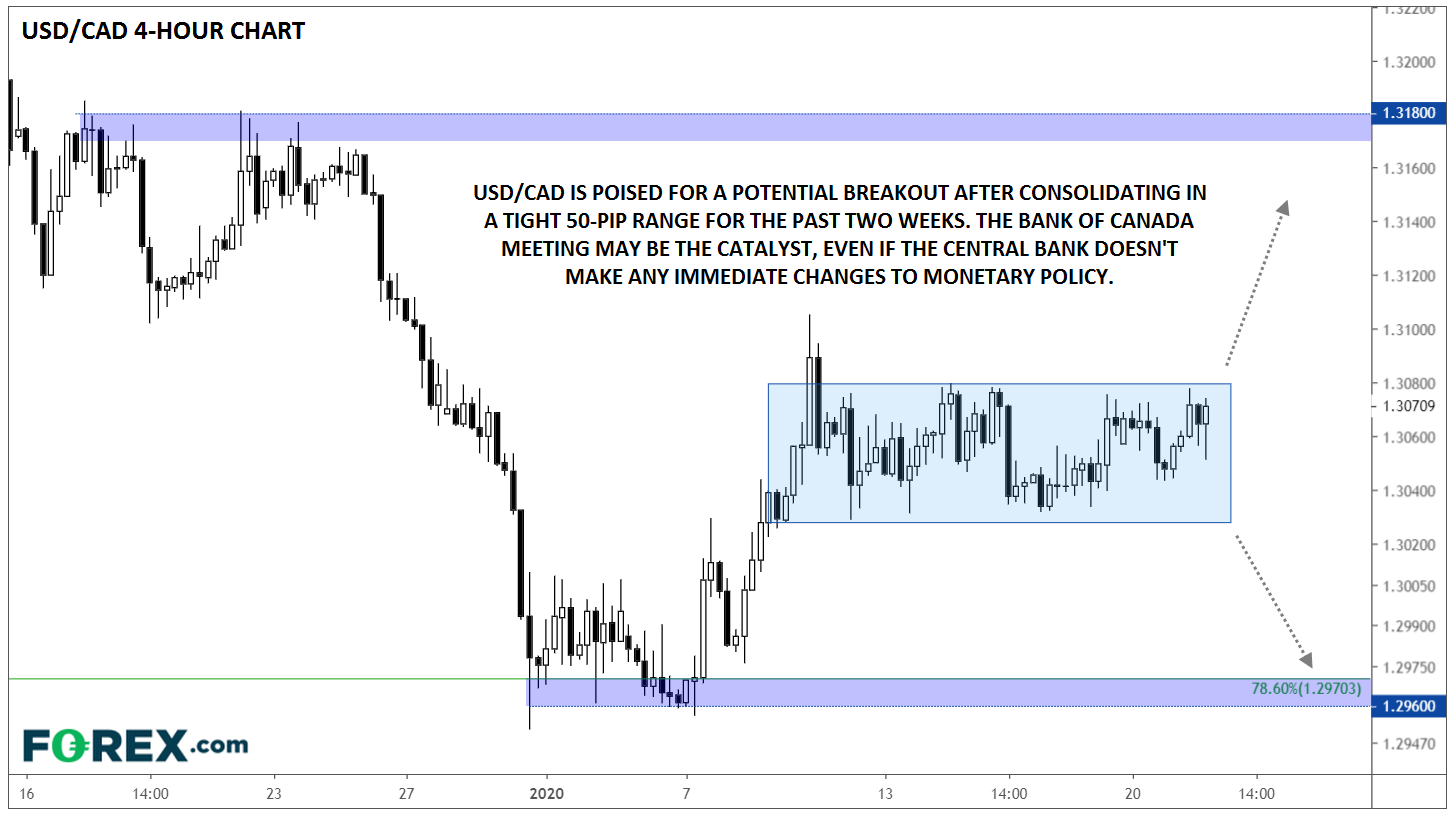 If the BOC tacitly acknowledges the downside risks to the Canadian economy as we outlined above, USD/CAD could rally through near-term resistance at 1.3080 and potentially continue all the way up toward the late December highs in the 1.3180 zone. Meanwhile, a more optimistic outlook from the BOC could boost the loonie and drive USD/CAD down to retest its early January lows near 1.2960.

One way or another, USD/CAD traders should keep a close eye on tomorrow’s release, especially given the tepid trading conditions of late!