The Bank of Canada is highly unlikely to raise interest rates at the conclusion of its policy meeting on Wednesday...

The Bank of Canada is highly unlikely to raise interest rates at the conclusion of its policy meeting on Wednesday. After increasing rates twice in July and September, the BoC kept its policy unchanged at 1% in October and is likely to do so again tomorrow. But with employment rising sharply last month and oil prices near their highs for the year, the central bank may put out a more hawkish statement than expected. If so, this could boost the Canadian dollar, leading to another drop in the USD/CAD. However, if the central bank turns out to be more dovish than anticipated, then we may see a quick return towards 1.29 resistance ahead of US nonfarm payrolls report on Friday.

After Friday’s stronger job figures from Canada, the USD/CAD dropped sharply from 1.2900 resistance area, slicing through 1.2800 and 1.2700, before taking out previous lows around the 1.2680 area at the start of this week. At the time of this writing, the USD/CAD had rebounded to re-test this broken 1.2680 level, which may now offer some resistance. However if price breaks above here then the short-term bias would turn bullish, in which case the bulls’ will be looking to fill at least some of the void that was left behind following Friday’s jobs-related drop. And should the BoC also deliver a dovish policy statement on Wednesday then we may see a move towards the next pool of liquidity that would be resting above the recent highs in the 1.29 area, next.

But if the seller’s manage to hold their ground around the 1.2680 then the Loonie could head towards the next support at 1.2590, which was an old resistance level and marks the 38.2% Fibonacci level against this year’s low. The next key support is around the 1.2460-1.2500 area, which corresponds with the 2016 low, the 50% retracement level and the point of origin of the latest rally. 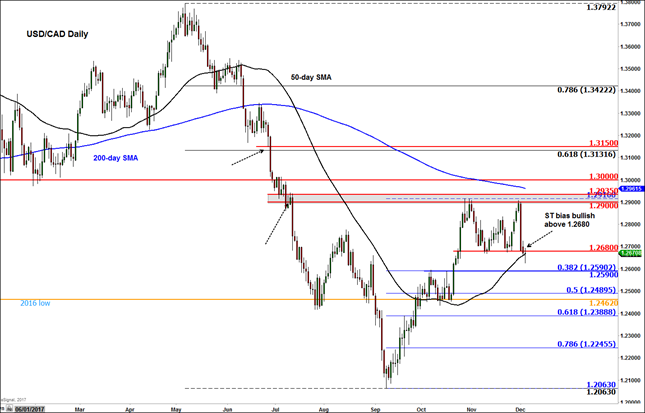