Despite weaker-than-expected CPI (-0.4% m/m vs. +0.1% eyed) and Retail Sales figures (-0.1% vs. +0.3%) last week, the Bank of Canada is almost certain to raise interest rates. With President Trump’s trade ire swinging back across the Atlantic toward China, the biggest risk to Canada’s economy (an abrupt end to NAFTA, or a NAFTA-like, trade deal) is now in remission.

Traders have taken notice, with the market-implied odds of a rate hike rising above 90%, so we’re unlikely to see much reaction to the interest rate decision itself. Instead, FX traders will key in on the central bank’s quarterly monetary policy report, including its forward economic projections, as well as BOC Governor Poloz’s subsequent speech, for hints about monetary policy will develop moving forward.

In previous meetings, the BOC has emphasized “uncertainty about trade policies,” so the expected removal of those concerns could support the loonie, especially if it results in more optimistic economic forecasts in the monetary policy report. While Poloz, an experienced central banker, is unlikely to precommit to any course of action, he could leave the door open for two more rate hikes by the middle of next year.

Turning our attention to USD/CAD’s daily chart, rates are pressing the top of the bearish channel off the July highs following a strong rally so far this month. Simultaneously, the RSI indicator is pressing against the “60” level, which has capped rallies in the currency pair for the last four months. In other words, the 1.3125 resistance level will be the key area to watch around the BOC release.

If the BOC comes off as less hawkish than traders expect (even if it still raises interest rates), USD/CAD could conclusively break above 1.3125, clearing the way for a continuation up toward the September high at 1.3225 or the July high near 1.3290 next. Meanwhile, a hawkish outlook from the BOC could keep the bearish channel intact and open the door for a drop back below 1.30 toward 1.2920 or 1.2800 in USD/CAD. 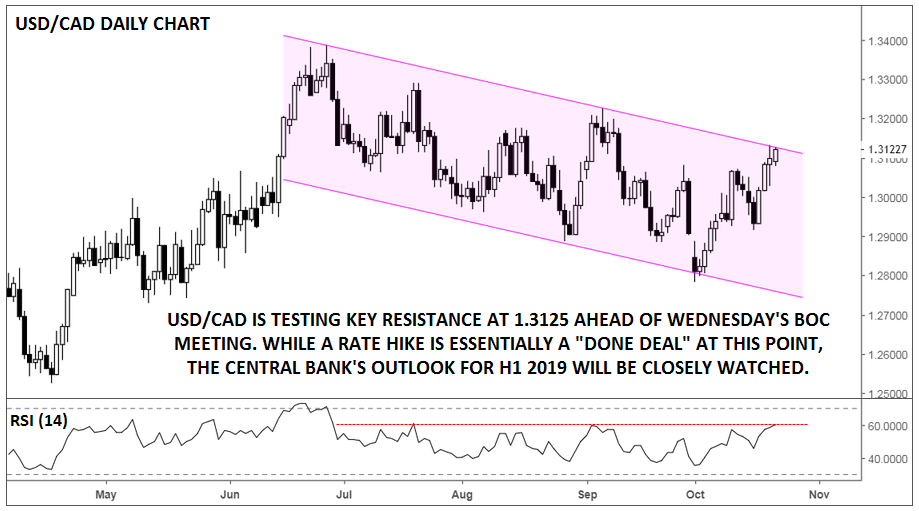