USD/CHF may have bottomed, but could US stock markets spoil the party for bulls?

The USD/CHF was the first major dollar pair to show strength this week and it has been the first to turn higher post FOMC...

The USD/CHF was the first major dollar pair to show strength this week and it has been the first to turn higher post FOMC. Most of the other major USD pairs have all given up their sharp gains after initially rallying hard on the back of a dovish policy statement from the Fed. As I warned in my EUR/USD piece earlier, most of the bearish news might be in the price now for the dollar. Although it is far too early to call this the bottom for the greenback, against her weaker rivals like the Swiss franc it is certainly looking strong at the moment. If tomorrow’s GDP data doesn’t show a big miss then the US currency could make a more profound recovery.

Ahead of the US GDP data, the USD/CHF has made back its entire losses from last week, creating what could be a bullish engulfing candle on its weekly chart, barring a surprise sell-off on Friday.  On the daily chart, one can see that it has created what looks to be a false breakout reversal pattern at 0.9445, the 2016 low. Since that fake out, it has reclaimed the broken 0.9555 support level and moved above intermediate resistance around 0.9595-0.9620 area. Once resistance this area could turn into support, leading to a continuation in the rally. A break above the most recent swing high at 0.9700 would mark a break in market structure. We need this condition to be met to fully complete the technical reversal pattern, although judging by what has happened so far in the week, this looks almost inevitable.

One thing that could see the Swiss franc come back to life is if we see a marked deterioration in risk appetite. This afternoon, US stock indices sold off heavily, led once again by tech names. If the losses sustain themselves then we may see a sharp rise in perceived safe-haven assets. However, from a purely technical perspective, the USD/CHF looks like it may have bottomed out 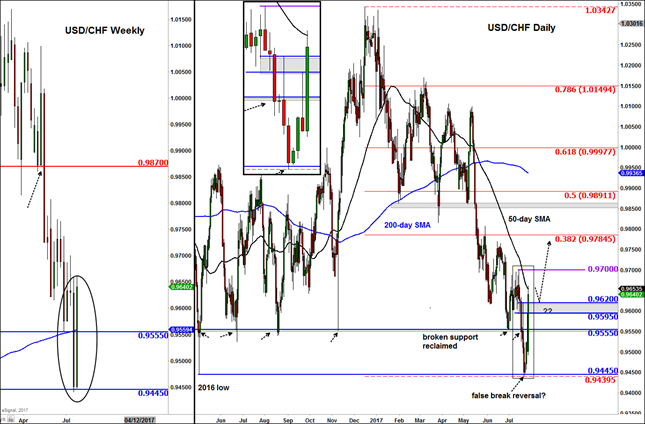