As Matt Weller noted in our FOMC recap the Fed left policy mostly unchanged (bar a 0.05% reduction of the IOER rate) yet remain concerned over price pressures. However, markets were positioned for a more dovish meeting, so short-covering ensued whilst rate-cut expectations were lowered. So we may well have seen the end of the dollar’s correction after retracing from near- 2-year highs over the past week.

We outlined our expectation for EUR/USD to retrace from its 22-month lows on Friday and, whilst the correction was a little deeper than expected, proved to be timely and now appear to have formed a swing high with a similar hammer to USD/CHF. However, given that USD/CHD has remained supported above its breakout level and led the US dollar breakout by several days, USD/CHF remains our preferred pair to trade around the stronger USD theme. 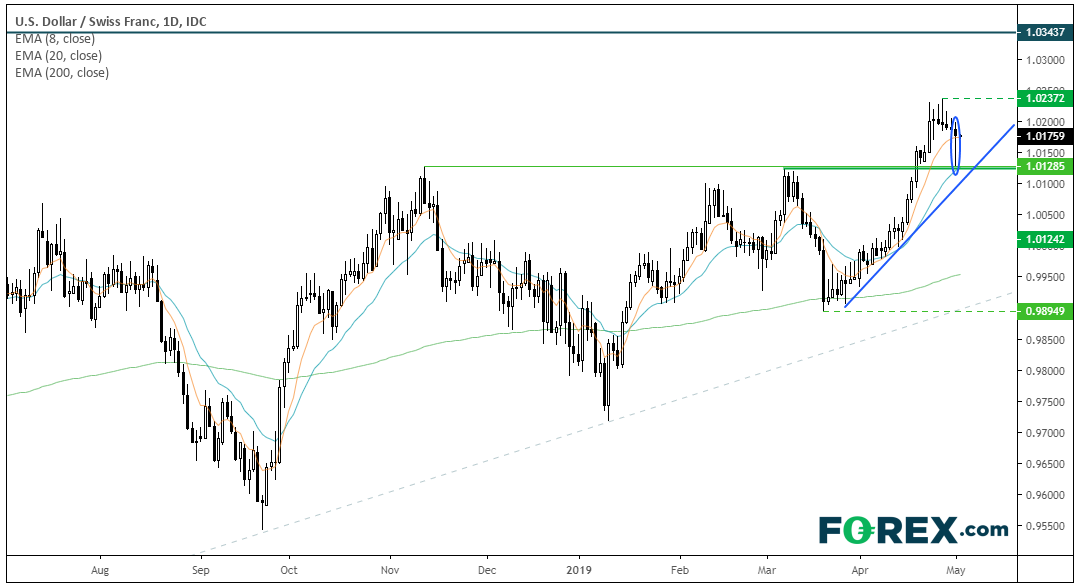 Structurally, USD/CHF trend is undeniably bullish with the 0.99 lows bouncing nicely from the 200-day eMA. We can see on the daily chart that an elongated bullish hammer has formed and perfectly respected 1.0128 support. Furthermore, the 20-day eMA also sits right on the 1.0124 high, placing a tight zone of support between 1.0124/28 which provides a clear level for bulls to focus on.

After such a volatile session, it possible volatility could remain subdued ahead of tomorrow’s NFP report but, as long as the support zone hold, we think US/CHF could be headed for the December 2016 highs.