Safe-haven gold, yen and franc have all been supported by weakness in the stock markets, with the benchmark US indices turning red after a green open.

Since the US stock market opened earlier, risk appetite has turned a bit sour. Safe-haven gold, yen and franc have all been supported by weakness in the stock markets, with the benchmark US indices turning red after a green open. Concerns over economic growth is back after those disappointing Chinese figures were released over the weekend. The dollar also turned lower in part because of ongoing concerns about the economic impact of the US government shutdown, but mainly because of exhaustion of its bullish trend.

The Federal Reserve has already indicated it will stop tightening interest rates for a while, so it was fundamentally difficult for the greenback to sustain its rally in the first place. Although a bit early, this could potentially be the point where the dollar may resume its bearish trend. But at the very least we are expecting to see some downside follow-through for the buck.

Below is our featured chart of the day, showing the daily price action on the USD/CHF. Along with other dollar pairs, it is currently displaying a bearish reversal pattern. Specifically, the USD/CHF is showing a bearish engulfing candle just below parity. If this is a genuine reversal pattern, as we think it might be, then the Swissy could potentially head sharply lower over the coming days. The next levels of potential support come in at 0.9910 then at 0.9850. Short-term resistance is seen around 0.9960. 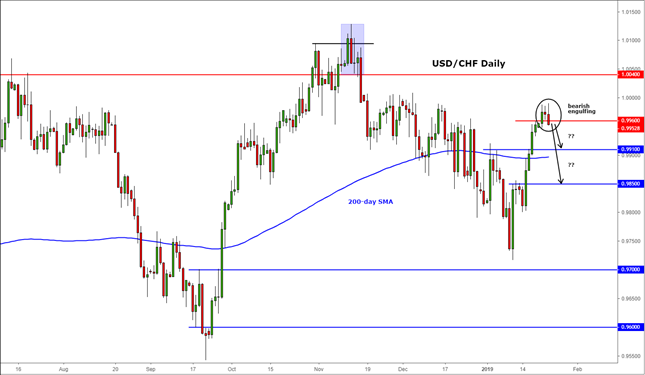