Friday’s US non-farm jobs report may well disappoint expectations after a number of leading indicators released throughout this week generally came out weaker than expected, not least the ISM’s employment component of the dominant services sector PMI today. But does that mean that the dollar will necessarily sell-off?

Friday’s US non-farm jobs report may well disappoint expectations after a number of leading indicators released throughout this week generally came out weaker than expected, not least the ISM’s employment component of the dominant services sector PMI today. But does that mean that the dollar will necessarily sell-off? And if it does sell-off, will it be sustained? Given the dollar’s weakness this week, we wouldn’t be surprised if it were to actually rally on Friday even if the jobs report disappoints expectations, possibly after an initial knee-jerk reaction lower. However at the same time, we don’t expect the buck to go to the moon either, as after all the focus right now is on politics and not many people will be willing to hold any bold positions going into the US elections next week.

One interesting currency pair to watch ahead of and after the NFP is the USD/CHF. For much of this year, the Swissy has been stuck in a relatively tight 500-pip range between 0.95 and 1.00. The dips have been bought, while the rallies have been sold. The most recent rally that began at the end of September caused the 50-day moving average to cross above the 200 as a bearish trend line also broke down. Eventually that rally stalled at just shy of parity towards the end of last month, before the Swissy slumped once again to fall back to below 0.9700 this week. But is it about to stage another rally now?

Well, if you observe price action closely since early May – when the Swissy formed a false breakdown reversal pattern at 0.95 – you will see that it has been putting in a series of higher highs and higher lows, often after deep retracements. This may well be an indication that the so-called “smart money” is buying the dips or accumulating long positions inside this wide consolidative range. If “they” weren’t accumulating longs then they would have been willing to allow price to take out liquidity pools on the downside i.e. the swings lows beneath which sell stops are often placed. Instead, higher lows have been formed while the rallies have often moved above the prior swings highs – where they may have unloaded their longs into the stop buy orders resting above those points – before reversing.

If the above observation is correct, then surely the smart money will try and defend the prior swing low at 0.9640 – for if they don’t, then that would be a break in the market structure in which case the sellers will gain the upper hand. It is interesting to note also that the USD/CHF has staged another deep retracement as it has gone even beyond the 78.6% Fibonacci level this time, thus shaking out much of the weaker longs from their positions.

So, for avoidance of doubt, I am pretty much bullish on the USD/CHF at these levels. But I will be very quick to admit that I am wrong if the prior low at 0.9640 breaks down. Thus I am expecting the Swissy to stage a rally towards prior reference points at 0.9843, 9865 and potentially move above parity over time. 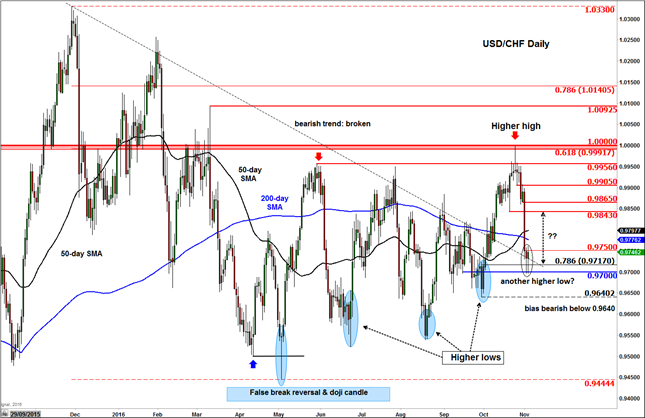