In a marked shift from the previous “party line,” two Fed members came out with relatively cautious assessments of the US economy this morning. As my colleague Fawad Razaqzada noted earlier today, “The Fed’s Deputy Chairman Richard Clarida said he is seeing evidence of a slowing global economy and that interest rates were "close to the neutral range,” although still rejected suggestions that the central bank has gone too far, too fast, meaning that a December rate hike is still looming. Fed’s Robert Kaplan, meanwhile, also acknowledged that global growth will be a little bit of headwind and that it may spill to the US economy.”

These (potentially coordinated?) comments suggest that some members of the Federal Reserve may be second-guessing the central bank’s informal once-a-quarter schedule for interest rate increases, especially as we move into 2019.

As Fawad notes, a December rate hike is still the odds-on likely outcome, but some traders are even calling that assumption into question. According to the CME’s FedWatch tool, Fed Funds futures traders are currently pricing in a 69% chance of an interest rate increase in December, down slightly from 76% last week and 79% last month. Notably, the sharp 26% drop in US oil prices over the last six weeks may take a bite out of inflationary pressures (and thus the Fed’s urgency to raise rates), even if the central bank ostensibly “looks through” changes in energy and food prices.

As of writing, the US dollar index is set for its biggest one-day fall so far this month, and USD/JPY is seeing particularly strong selling pressure. After failing to make a new high above October’s peak near 114.50 last week, the pair has rolled over and its bullish trend line off the March low.

Of course, this trend line saw a prominent false breakdown in late October, so we’re hesitant to automatically declare the established uptrend over even if we close today’s trade below it. Nonetheless, the bullish tide in USD/JPY is showing signs of shifting heading into a holiday-shortened week for US traders… 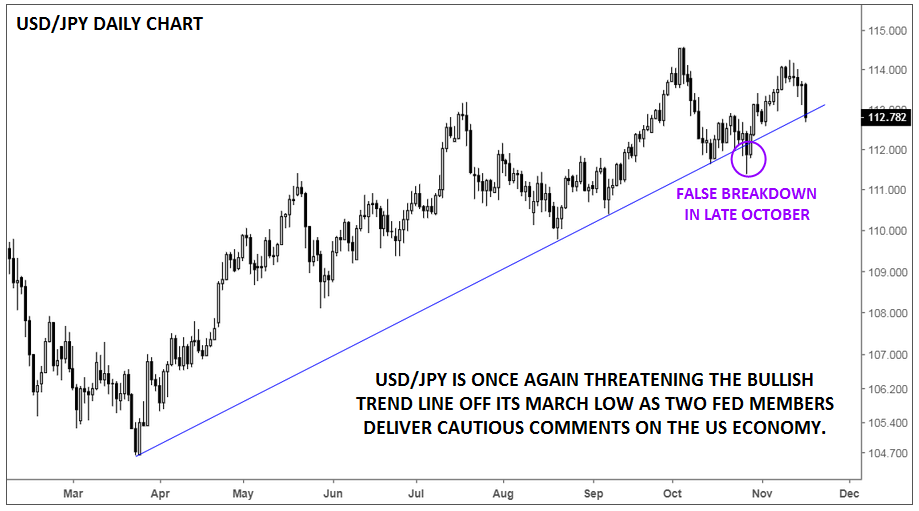