After a very quiet period in the FX markets, volatility spiked in midweek amid a flurry of central bank meetings. The Fed’s dovish rate hike on Wednesday caused the dollar to drop and the greenback has since drifted further lower with the Dollar Index dipping below the 100 level again.

After a very quiet period in the FX markets, volatility spiked in midweek amid a flurry of central bank meetings. The Fed’s dovish rate hike on Wednesday caused the dollar to drop and the greenback has since drifted further lower with the Dollar Index dipping below the 100 level again. The other major central banks’ policy decisions were mostly in line with the expectations, although there was a bit of a surprise at the Bank of England with one MPC member voting for a rate rise. The Swiss National Bank reiterated the need to keep its monetary policy extremely accommodative, as too did the Bank of Japan. There are more central bank meetings to look forward to today, but there will be one more next week: the Reserve Bank of New Zealand, although we don’t expect to hear anything new from them. As far as today is concerned, there will be some US macroeconomic data in the afternoon. Among other things, industrial production and consumer sentiment may be the key figures to watch, although we don’t expect the dollar to move sharply on the back of these numbers. But after big falls this week, some profit-taking towards the close would not come as a surprise to us.

So, what’s next for the dollar? Well, at the moment it remains in correction mode, which we had fully expected, for example HERE and HERE. But we remain fundamentally bullish on the greenback because the Fed remains the only major central bank which is actively tightening its policy. That being said, there’s always the possibility that it may have topped out. But we are now on the lookout for bullish signs to emerge, which could lead to at least a short-term bounce for the dollar. Among the USD pairs, we favour the USD/JPY because of the still-positive sentiment and the fact that the BoJ is nowhere near ready to tighten its policy. Thus if the dollar were to make a comeback, its best bet currently would be against the yen.

But for now at least the USD/JPY remains in a technical correction phase. This week’s break below the 113.55/75 level means there was a short-term break in market structure. Unless this level is reclaimed by the bulls, there is a risk we may see a deeper pullback on the USD/JPY. Should the next level of support at 112.90 break then there is little further reference points to watch until the low of the range at around 111.50. A potential break beneath that area could pave the way for a move down to the 200-day moving average at 108.05 or even the long-term support and 61.8% Fibonacci level at 105.50/80 area. 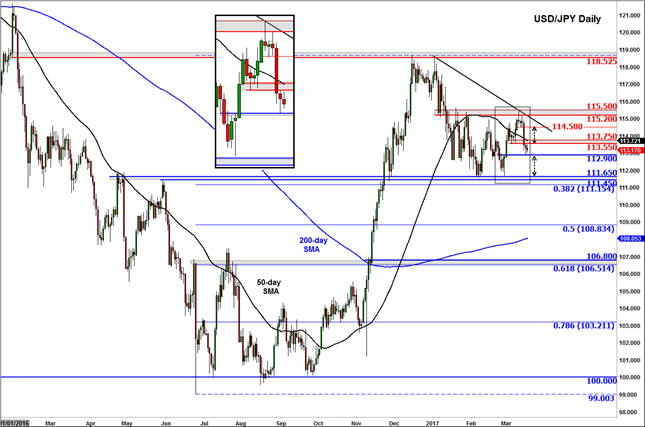