Barring an unexpectedly sharp rally this evening, the dollar is set to end the week significantly lower.

Barring an unexpectedly sharp rally this evening, the dollar is set to end the week significantly lower. The EUR/USD has been one of the strongest performers, supported by receding political risks in the Eurozone and on speculation that the ECB is set to start tightening its policy sooner rather than later amid ongoing economic recovery in the single currency bloc. Elsewhere, the USD/CAD has fallen sharply, mainly due to the rallying prices of crude oil – Canada’s largest export commodity. Meanwhile, the risk-sensitive USD/JPY pair dropped sharply in mid-week along with equities but both markets regained their poise at the end of the week as concerns around Donald Trump's presidency eased. However, while stocks rallied, the dollar weakened again on Friday after Fed’s James Bullard said the central bank's plans to raise rates may be too fast as he acknowledged the slowdown in economic activity since March. As a result of the buck selling, the Dollar Index has fallen below 97.50, further distancing itself from the 100 level.

Given the improvement in risk appetite at the end of the week, if there is one USD pair most likely to bounce back next week it would be the USD/JPY. But even this pair is not completely out of the woods just yet, even if it held its own relatively well. It found support arounds its technically-important 61.8% Fibonacci retracement level at 110.50. But at the time of this writing it looks set to end Friday’s session with an inside bar candlestick around the 50-day moving average. Thus, without a clear directional bias.

The USD/JPY needs to be watched closely in early next week, for there could be further technical follow up buying or selling in the direction of the breakout. It is important to be wary of false moves, so what you want to see is a clean break and look to potentially trade the re-test of the broken level. The key levels to watch are at 111.75 to the upside and 111.05 to the downside. A clean break below 111.05 could pave the way for a drop to the 200-day moving average at 109.70 next, while a clean break of 111.75 could see the USD/JPY rise towards the old support level at 113.00. 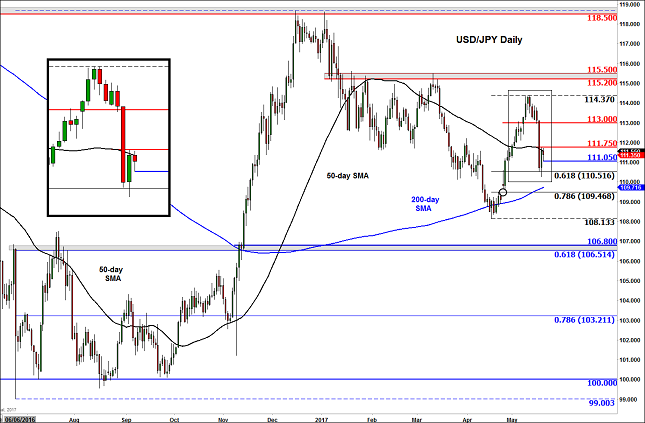