Today’s stronger job reports from the US and Canada caused both dollars to bounce nicely against most currencies, most notably the Japanese yen. The latter was already weak after the Bank of Japan overnight offered to buy an unlimited amount of 10-year Japanese bonds.

Today’s stronger job reports from the US and Canada caused both dollars to bounce nicely against most currencies, most notably the Japanese yen. The latter was already weak after the Bank of Japan overnight offered to buy an unlimited amount of 10-year Japanese bonds. According to Reuters, the BoJ also stepped up its purchases of five- to ten-year JGBs through an auction to 500 billion yen from 450 billion yen. This was all part of the BOJ’s target of keeping the 10-year JGB yield at zero. The intervention clearly demonstrates that at a time when other central banks are turning hawkish, the BoJ is still quite dovish as it wants to keep yields low to help create inflation in the Japanese economy. Given the growing disparity in monetary policy stance of the BoJ and other major central banks, the likes of the USD/JPY, EUR/JPY, CAD/JPY and possibly GBP/JPY could rise further over time.

The USD/JPY recently broke through its bearish trend lines after its mid-June reversal. The breakout has been sustained, so the path of least resistance remains to the upside as we conclude the week. The broken resistance are around 113.50-70 could turn into support in early next week, leading to a continuation of the rally above the last swing point at 114.35 and possibly towards the next area of resistance around 115.20-115.50 before deciding on its next move.

So, as things stand, the path of least resistance is to the upside for the USD/JPY from both technical and fundamental points of view. The technical outlook would turn bearish in the short-term upon a break in market structure of higher highs and higher lows. The most recent low was at around 112.90. Thus a break below this level would be bearish in the short-term outlook. 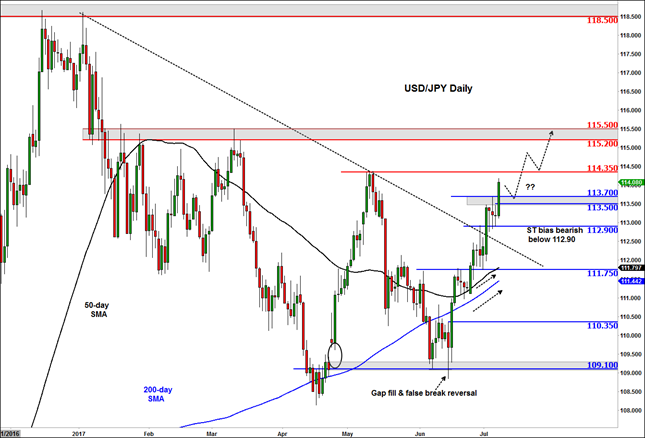