In the UK this morning, Brexit Secretary Raab reiterated that he was confident that a trade deal with the European Union, surprising absolutely no one, though rumors of a potential snap election in November certainly caused some traders to raise their eyebrows.

Meanwhile in the US, rumors swirled that Deputy Attorney General Rod Rosenstein was quitting his post before getting fired…then that he was refusing to quit and would have to be fired…and now ultimately will remain in his post until at least Thursday, when he will meet with President Trump once again.

The news hit risk assets hard, as it could prompt a potential constitutional crisis if the next Department of Justice ranking member (Solicitor General Noel Francisco) tries to shut down Special Council Mueller’s investigation of the President. As of writing, all major US indices are in the red and the so-called “commodity dollars” (CAD, AUD, and NZD) are among the worst-performing major currencies on the day.

Interestingly, the “safe haven” yen hasn’t caught much of a bid on the headlines. In fact, USD/JPY is trading higher on the day to test Friday’s 10-week high in the upper-112.00s. Technically speaking, the pair remains in an uptrend on both a medium term and short-term horizon, as the chart below shows. Rates have formed a “rounded bottom” of sorts over the last two months, and bulls have now turned their eyes to July’s intraday highs around the 113.00 handle, which also marks the highest level the pair has traded at since the first week of the year. A confirmed break above the 113.18 level could expose the highs from May, July and November 2017 above 114.00 next. 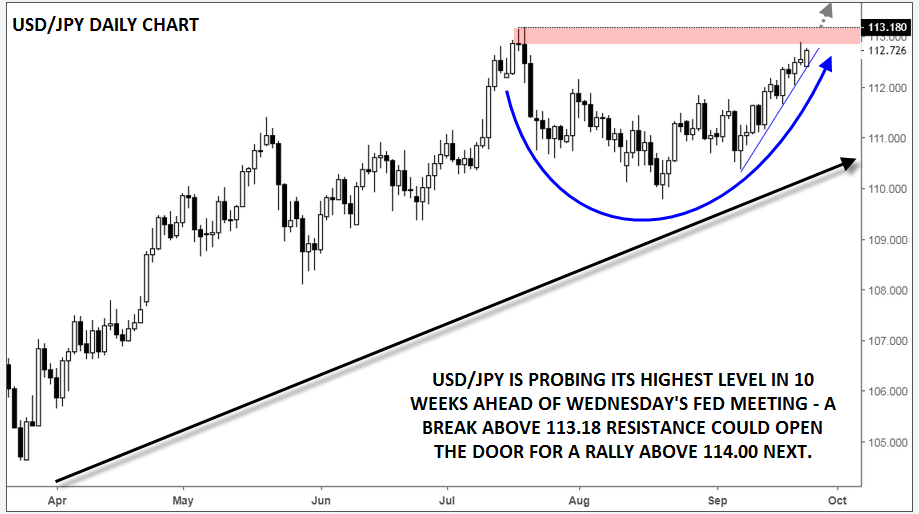 Beyond political headlines, Wednesday’s FOMC meeting may be the biggest market mover of the week. Even though the central bank’s presumed plan to raise interest rates another 25bps has already been completely discounted, traders will closely parse the accompanying statement, economic projections, and press conference with Fed Chair Powell for insights into how likely the Fed is to raise rates in December (currently priced at about an 80% probability according to the CME’s FedWatch tool) and how many times Powell and Company plan to hike rates in 2019.

Stay tuned for our full FOMC preview and recap tomorrow and on Wednesday!