Fed chairman Powell’s comments earlier may have sent USD/JPY to its highest level in 24 years, but they also sent the pair reeling later in the day.

It’s a new high for USD/JPY, again! The currency pair traded to its highest level in 24 years after Fed Chairman Powell started off his speech today at the European Central Bank forum in Sintra, Portugal by saying the that the US economy is in strong shape and is well positioned to handle tighter policy.  USD/JPY touched the psychological round number resistance level at 137.00, its highest level since September 1998.  The prior near-term high was just a few days earlier on June 22nd, when price traded at 136.71.

USD/JPY began trading aggressively higher on March 11th as the pair broke above 116.35.  The pair reached a high of 131.34 on May 9th as the RSI began to diverge with price in overbought territory.  USD/JPY pulled back in a descending triangle formation as the RSI unwound and on May 31st,  the pair powered higher, resulting at today’s new high of 137.00.  However, notice the RSI and price are diverging once again from overbought territory.  This could be a warning that USD/JPY may be ready for another correction. However, Powell wasn’t all that rosy during his speech.  Powell also hedged his bets of a strong economy and strong growth by noting that there are “no guarantees” that the Fed can achieve a soft landing. He also said that the process of getting inflation down will cause some pain.  Recall that after the May CPI reading of 8.6% YoY and the higher than expected preliminary Michigan Inflation expectations Index, the FOMC hiked rates by 75bps, as opposed to the 50bps that was expected.

After Powell’s “not so spectacular” comments, USD/JPY began pulling back, along with bond yields, as recession fears began to once again creep into the minds of market traders.  The pair pulled back to 136.34 and has been range bound since.  Not only did USD/JPY make a 24 year high today, but it also took out the 127.2% Fibonacci extension from the highs of June 14th to the low of June 16th, at 136.75.  Above today’s highs, the next resistance level is at the 161.8% Fibonacci extension from the same timeframe at 138.18, then horizontal resistance from the August 1998 lows at 138.82.  However, it the pair continues with its current pullback on the shorter timeframe, first support is between previous resistance and today’s lows, which is 135.62/135.76.  Below there, price can fall to the lows from June 23rd at 134.27 and then a series of prior lows near 133.50. 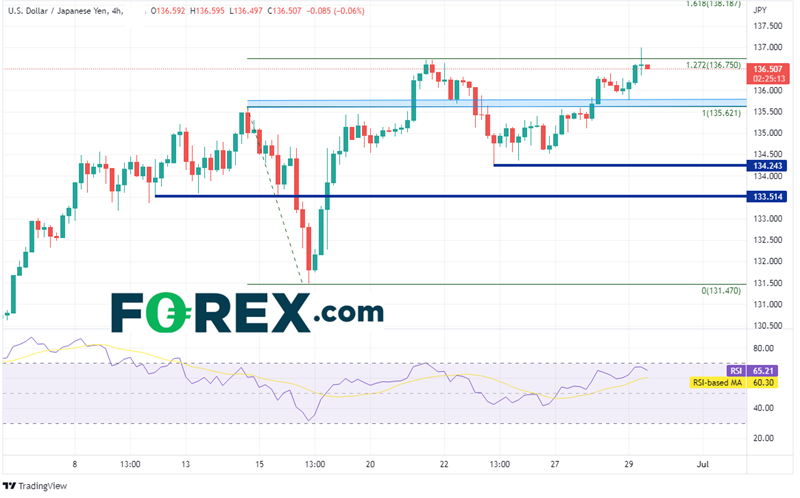 Fed chairman Powell’s comments earlier may have sent USD/JPY to its highest level in 24 years, but they also sent the pair reeling later in the day.  Watch for comments from Japanese officials as they continue to try and talk up the yen, especially if they mention unilateral intervention. In addition, the US Core PCE data tomorrow may cause USD/JPY some volatility.