USD/JPY: set for a bounce?

As the divergence in monetary policy between the US and Japan began to widen, the USD/JPY started its massive bull trend from around the year 2012 which ultimately ended in mid-2015, well before the December 2015 rate increase. During this period, the US central bank slowly started to unwind its extremely loose unconventional monetary policy, ending QE3 in late 2014, while the Japanese central bank continued to loosen its policy further in the form or rate cuts and QE. But the USD/JPY has fallen sharply in recent months. The USD has weakened due to the Fed becoming less and less hawkish while the JPY has soared because of the fact that the BOJ has continually failed to meet expectations with its easing steps.

Nevertheless, the US Federal Reserve is still the only major central bank which is deemed to be hawkish due to a general but slow improvement in US data, while the Bank of Japan is still one the most dovish central banks out there. This makes us fundamentally bullish on the USD/JPY. At the moment, the market is demanding further action from the BOJ, and should the USD/JPY weaken further then the central bank may have to act accordingly. But it is also possible that we will see further improvement in US data, which would make another rate increase from the Fed more likely. So, the fundamental story is still there for the USD/JPY to appreciate, even without the help of the BOJ.

Now today I wanted to draw your attention to price action around the technically-important 100-101 area, which was a massive resistance level in the past. The USD/JPY will soon either break down further or bounce sharply from around this area. Make no mistake about it – the monthly chart is probably the most important time frame as far as major trends are concerned. So what you may see on your daily or intraday charts may have to be taken with a pinch of salt. Now the 4-hour chart in the inset shows price has been struggling to make headway even though it has had a few tests of the upper end of this 100-101 range. When price struggles to lift off quickly, it would normally make me think that a break down would be the most likely outcome rather than a rally. However, since the monthly time frame supersedes the 4-hour in terms of technical importance, it may pay to take any short-term bearish developments with a pinch of salt here.

Thus if you are bearish at these levels, it may not be a bad idea to proceed with extra care and be more nimble. But if you are bullish, then maybe waiting for confirmation would not be bad thing. Mind you, we have already seen some bullish candles on the 4-hour, such as the one highlighted (doji). But the lack of any significant bullish follow-through so far may be a sign for concern. Nevertheless, the confirmation could come in to the form of a break above a key short-term resistance level such as 101.45 and ideally 101.80. If seen, the USD/JPY may then start to squeeze higher as the shorts rush for cover. However, the 100-101 range is obviously 100 pips wide and it is possible price may test liquidity in the lower end of this range before potentially bouncing back – if it does at all.

Needless to say, a decisive break below 100 would completely invalidate the bullish outlook. In this potential scenario, the USD/JPY may go on to drop to the next significant support at 95.00, where further action from the BOJ would then become more likely, in our view. Also, the 95 handle is where the long-term 61.8% Fibonacci level meets the prior resistance, making it likely that price will at the very least stage a sharp bounce there.

So there you have it, the USD/JPY currency pair should provide plenty of good trading opportunities in due course. The only thing required now is patience. Conservative traders may wish to wait for price to make up its mind then trend in the direction of the trend. 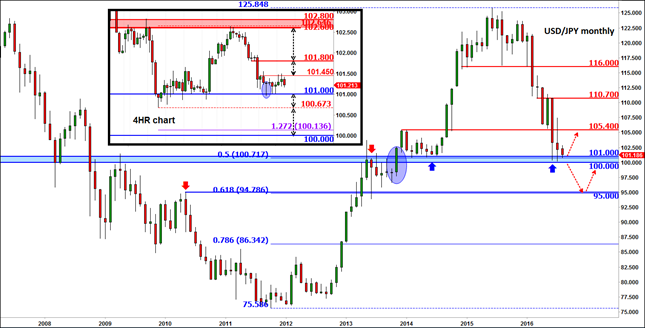