USD/MXN Up Over 1% before Thursday's Bank of Mexico Meeting

Banxico is widely expected to cut interest rates by 25bps for the third time.

USD/MXN is one of the day’s biggest movers, up 1.20%,  as traders begin to focus on the Bank of Mexico meeting on Thursday.  Banxico is widely expected to cut interest rates by 25bps for the third time in a row, from 7.75% down to 7.50%.  Both growth and inflation have been falling in Mexico for the better part of the year.   The statement afterwards will be the more important part of the meeting, rather than the rate decision itself.  The markets will be interested to see just how dovish the Bank of Mexico will be.  USD/MXN seemingly brushed aside President Trump’s plea to democrats to pass the United State-Mexico-Canada Agreement (USMCA) during his speech at The Economic Club of New York.  It appears the markets are waiting for more action from the House, and less talk. 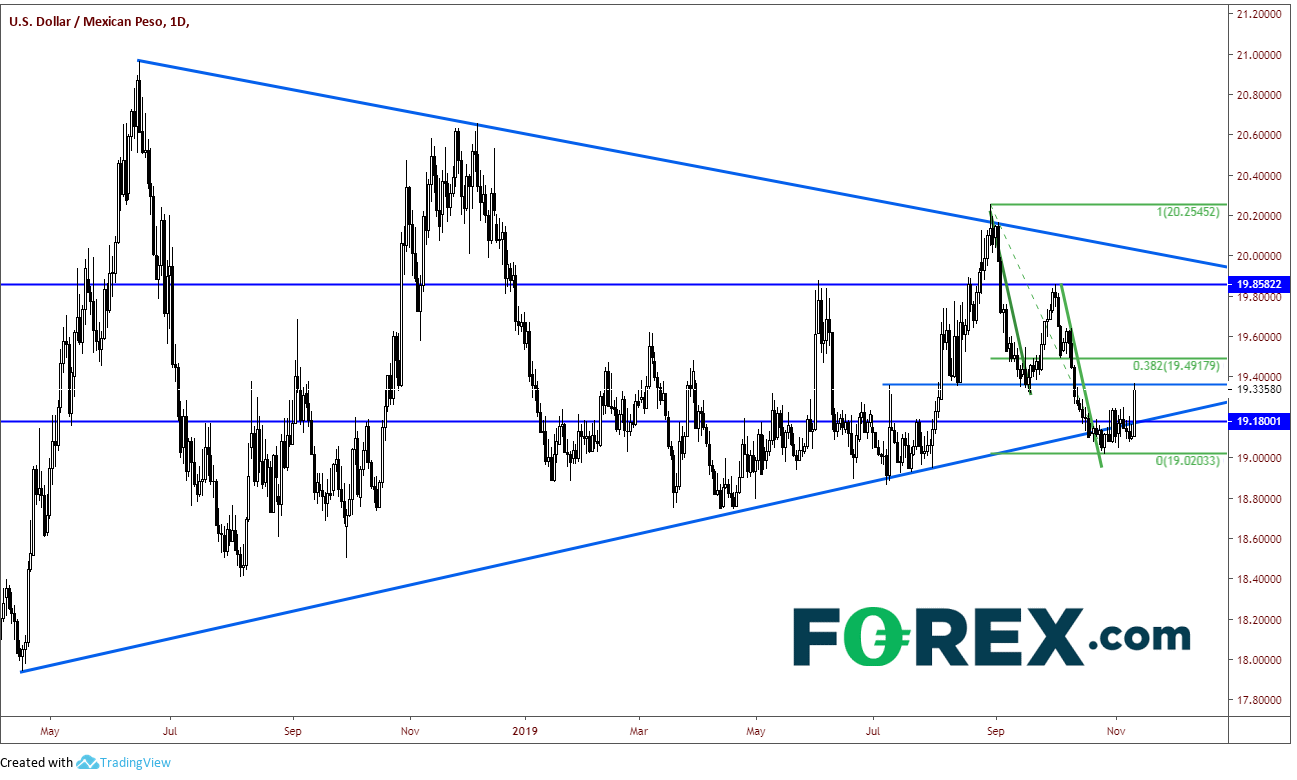 On a 240-minute timeframe, USD/MXN powered higher through the 19.3320 horizontal resistance level.  This level also coincided with the 50% retracement level from the recent highs on October 10th to the lows on October 28th.  Horizontal resistance above comes in near 19.5000, and then the October 10th highs near 19.6417.  Above that, a band of resistance is at prior highs and the 127.2% Fibonacci retracement level from the previously mentioned timeframe between 19.8500 and 19.8600.  First support arrives at the bottom trendline of the triangle on the daily timeframe near 19.1800.  Below there is a wide band of support at recent lows of 19.0222 and previous lows (not shown) down to 18.8500.

From a macro perspective, keep an eye on Thursday’s Bank of Mexico meeting, as well as, comments on the USMCA for the next direction for USD/MXN.  From a technical perspective, continue to watch for a clear break of the trendlines as price gets closer and closer to the apex of the symmetrical triangle.