Was the dollar sell-off justified on ‘soft’ CPI?

The last trading day of the week is drawing to a close and after huffing and puffing all week the dollar fell further in response to the latest US economic data.

The last trading day of the week is drawing to a close and after huffing and puffing all week the dollar fell further in response to the latest US economic data. Consequently, buck-denominated precious metals and the major currency pairs all rallied. However, the data wasn’t too bad. To say I was surprised by the market’s reaction is an understatement. After all, CPI inflation actually rose to 2.2% year-over-year, above the Fed’s 2% target, from 1.9% previously, while headline retail sales climbed by a cool 1.6% month-over-month. Not bad. Both figures were only 0.1 percentage points below expectations. Again, not bad. It seems like the markets were concerned about the core figures. While core retail sales actually rose by 1%, which by the way was higher than expected, core inflation only climbed 0.1% on the month rather than 0.2% expected. As a result, the year-over-year rate of core inflation remained unchanged at 1.7%. In the grand scheme of things, will this small miss make a difference as far as interest rate changes are concerned? Probably not. I think the Fed will still raise rates in December, barring an unexpectedly sharp downturn in data from now on until then. But in the financial markets, it is all about relative changes in expectations. So, on a relative basis, the weaker core inflation figure does reduce the likelihood of a rate increase slightly. But it probably won’t be a game changer. Consequently, I am expecting the dollar to bounce back, possibly as early as next week.

Plenty of non-US data next week

Next week, though, US data will take a bake seat as the focus turns to mainly UK fundamentals with CPI, wages and retail sales figures being released from Tuesday to Thursday in that order. We will also have important data from China, too, with CPI on Monday and GDP and industrial production coming in on Thursday. Thursday will also see the release of Australian employment figures. On Friday, we will have some top tier Canadian data, including CPI and retail sales. Also worth keeping an eye on next week are: a speech by Fed Chair Janet Yellen (Sunday), New Zealand CPI (Monday night or early Tuesday NZ time), RBA monetary policy meeting minutes and BoE Governor Mark Carney’s testimony (Tuesday). In addition to the economic data, there will be plenty of corporate earnings news to look forward, as well, for the stock market fans.

So, there’s something for everyone next week. Ultimately the key question will be about the dollar for FX traders. After failing to take out key resistance around the 94.10 area this week, the Dollar Index (DXY) looks set to close the week lower and remain in the previous range. Was that brief peak above 94.10 resistance a false breakout reversal pattern (bearish) or a break in market structure (bullish)? The correct answer is we don’t know yet and it depends on one’s time frame. Because if you zoom out, you will see another false breakout reversal, this time a bullish one, when the DXY failed to hold below the 2016 low of around 91.92 after dropping to 91.00. From this level, we saw an impulsive move higher, and now we could be in the corrective wave down. So, If 91.00 was the low for the year, then the dip buyers might step back in now that we have had a sizeable pullback, before the next impulsive wave unfolds. To test this thesis, one needs to watch the support levels closely now, starting at 92.92 and 92.65 (old resistance levels). The Fibonacci retracement levels at 92.25 (61.8%) and 91.71 (78.6%) are additional “invisible” support levels that may limit the downside for the DXY. But any potential move below the 78.6% retracement level would probably put the bullish theory to bed once and for all. 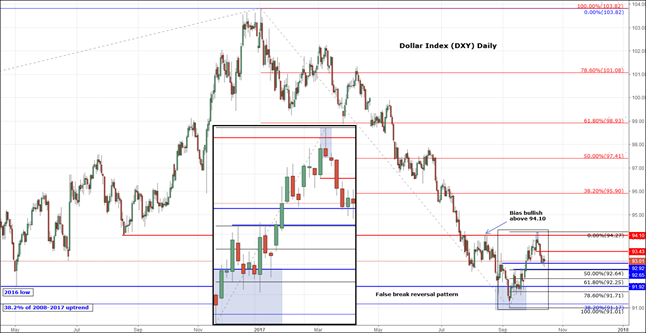