After a quiet start today, volatility should pick up from mid-week ahead of three major events.

After a quiet start today, volatility should pick up from mid-week ahead of three major events. Interest rate decisions from the Fed and ECB on due on Wednesday and Thursday, respectively. Then, it is all about the snap election in the UK which is also happening on Thursday with the outcome likely to be announced late in the evening or in the early hours of Friday. Meanwhile, the US-China trade situation remains uncertain. Another round of US tariffs on $156 billion of Chinese goods is due next Sunday. That’s unless the two sides manage to strike a phase one deal in time, in which case the new and some of the existing tariffs may be cancelled. However, there was no sign of that happening at the start of this week.

The dollar will be in focus on Wednesday given the fact we will have the latest US CPI reading (see below) and FOMC’s last meeting for the year to look forward to. With Friday’s monthly employment report surprising even the most optimistic of forecasts, and other US macro pointers not being too bad, the Fed may well provide a more upbeat outlook on the economy than expected. If so, this could see the markets reduce expectations for a rate cut in 2020, which should help provide some support to the dollar. However, trade uncertainty will be discussed in detail - make no mistake about it. For as long as there is a risk that the trade talks collapse, the risks to the economic outlook would be skewed to the downside. Meanwhile, policymaker may also take note of the somewhat alarming slowdown in US manufacturing activity as we have seen over the past few months. Although this may be due to temporary factors, prolonged weakness in the sector could potentially lead to job losses and impact other sectors of the economy. The Fed may therefore monitor factory activity closely going forward. All told, we think the FOMC’s policy statement or press conference will contain few surprises.

The European Central Bank’s last policy decision and press conference for 2019 will be on Thursday. However, this will be Christine Lagarde’s first policy decision as the ECB head. Judging by her few speeches since she took over, it is unlikely the ECB will alter monetary policy. However, Lagarde may announce some changes in the way the central bank has been doing things under her Italian predecessor Mario Draghi – this will unlikely cause too much of a reaction in the euro. Meanwhile, economic data in the Eurozone has been poor for much of 2019, although we have seen some positive surprises here and there of late. The improvement has been nothing too significant, however. We therefore think the ECB will maintain is dovish view. The single currency could come under some pressure, before the focus shifts to the UK election and Brexit…

The UK’s eagerly anticipated general election is on Thursday with the outcome set to be announced late on the day or in the early hours of Friday. The means that the pound – and by extension, the FTSE – will be among the most important markets to watch for volatility towards the end of the week. Here is what my colleague Fiona Cincotta wrote earlier today on the pound and election:

Other important macro events this week 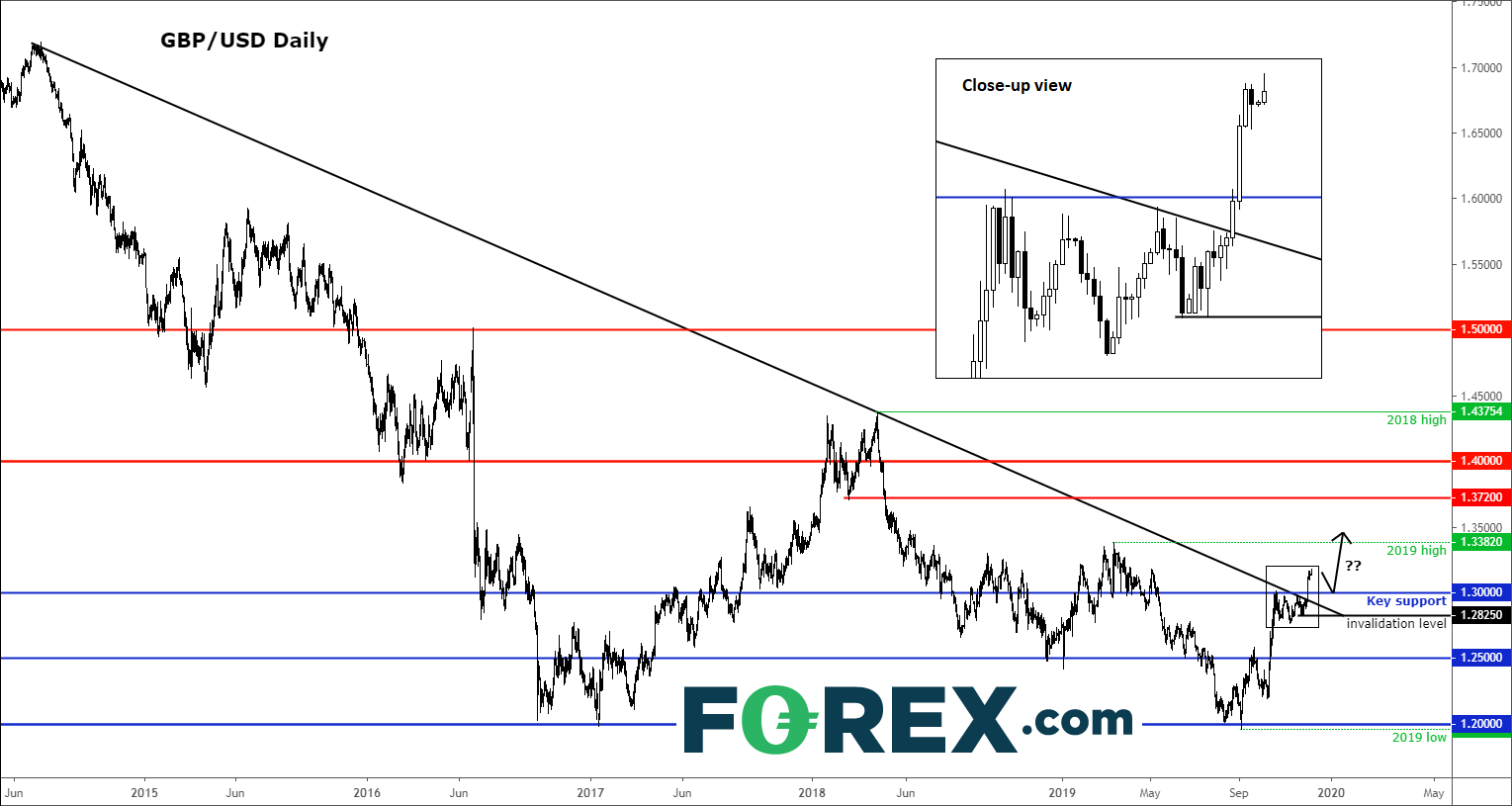 Given the importance of the UK election, which could shape the direction of Brexit, the pound is going to be the most important currency to focus on this week, we think. Like other pound crosses, the main GBP/USD pair has been making higher highs and higher lows in anticipation of a Conservatives majority win. If the polls were to tighten ahead of the elections, then the cable may pull back to the 1.30 handle before potentially resuming higher. As well as being a psychologically-important level, this was formerly resistance meaning it could turn into support upon a potential re-test. If the upward trend continues, as we think it might, then the liquidity above this year’s earlier high at 1.3380ish is the bulls’ main objective. The bears, meanwhile, will want to see a break down well below the 1.30 handle, and some bearish news too in so far as the election is concerned. A potential move below the most recent low circa 1.2825 would be the ideal outcome for them. However, at the time of writing, the bulls were in full control…