Week Ahead: Will Dollar Extend Gains?

The biggest themes in the markets this week can be summarised as: (1) US dollar strength, (2) weakness in foreign currencies – particularly where the central bank is still dovish such as the Japanese yen and Swiss franc – and (3) positive sentiment on Wall Street.

The biggest themes in the markets this week can be summarised as: (1) US dollar strength, (2) weakness in foreign currencies – particularly where the central bank is still dovish such as the Japanese yen and Swiss franc – and (3) positive sentiment on Wall Street. Trade war concerns was a key talking point again and a major concern amongst economists, politicians and central bankers. However, market participants have on the whole been evidently less concerned about it all. This has been reflected for example in the US tech-heavy Nasdaq 100 index climbing to a fresh record high and safe haven gold and yen falling out of favour. The dollar rose further owing to concerns over inflation as a result of the import tariffs pushing up costs.

With US equities showing relative strength again, the pace of the rally for the indices could possibly accelerate should the upcoming US corporate earnings results prove to be better than expected. In terms of macro data, the economic calendar is quite busy next week, although there won’t be much in the way of top tier US releases to look forward. But we’ve already had the major figures from the world’s largest economy in the past couple of weeks when we found out that employment grew strongly again although wages rose a little weaker than had been anticipated and inflation was more or less in line with the expectations. In fact, inflation could accelerate in the coming months due to the increase in the price of goods and services as a result of the import tariffs.  This in turn could lead to speculation that the Fed may have to tighten its monetary policy more aggressively or at least cement expectations over two additional rate rises before the year is out. In other words, the dollar could further expand its recent gains having already risen for the past three months against a basket of foreign currencies.

Below are some of the highlights from the week ahead in terms of economic data:

So, heading towards the weekend and the new week, the bias remains bullish on the dollar and the same for the US equity markets. Given the recent sharp moves in the USD/JPY, we could initially see some profit-taking at the start of the new week before the trend probably resumes again. We are also expecting the USD/CHF to sharply expand its gains in the coming weeks as the disparity between US and Swiss monetary policies grow. The Australian dollar and British pound will probably be the busiest of the currencies next week as traders respond to data from both nations and China, with the never-ending Brexit talks also keeping speculators on their toes. And the Canadian dollar will also garner some attention, particularly at the end of the week as traders respond to Canadian CPI and retail sales figures – any further pickup in inflation should boost expectations over further rate hikes from the Bank of Canada. 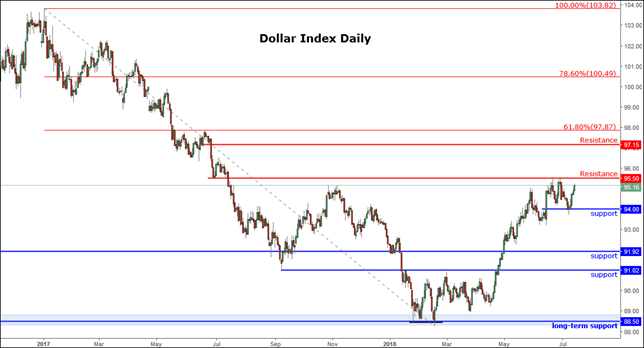