What does Biden’s stimulus plan mean for the US Dollar?

Markets are forward looking. This may be the opportunity to “buy the fact”!

On Thursday evening, President-elect Joe Biden unveiled a $1.9 trillion stimulus package to help Americans due to the economic impact of the coronavirus.  The package includes an additional $1400 in direct payment per person, which would result in the $2,000 amount President Trump was asking.  Biden will have an easier path to pass his stimulus bill than President Trump, as Democrats will control both the House and the Senate come January 20th.  In addition, according to the New York Times, Biden’s stimulus plan will also include:

Early forecasts of the size of the stimulus package was for $1.5 trillion.  Bumping it to $1.9 trillion will help Biden in the negotiation with Republicans.  What will a package of this size mean for the US Dollar?  Although the amount is less than the $3.4 trillion in aid from the HEROS act, an amount with “trillion” is still significant!  Since the pandemic hit the US in full force in March, the abundance of both monetary and fiscal stimulus has helped weaken the US Dollar index from a high of 103.00 to recent lows at 89.20. 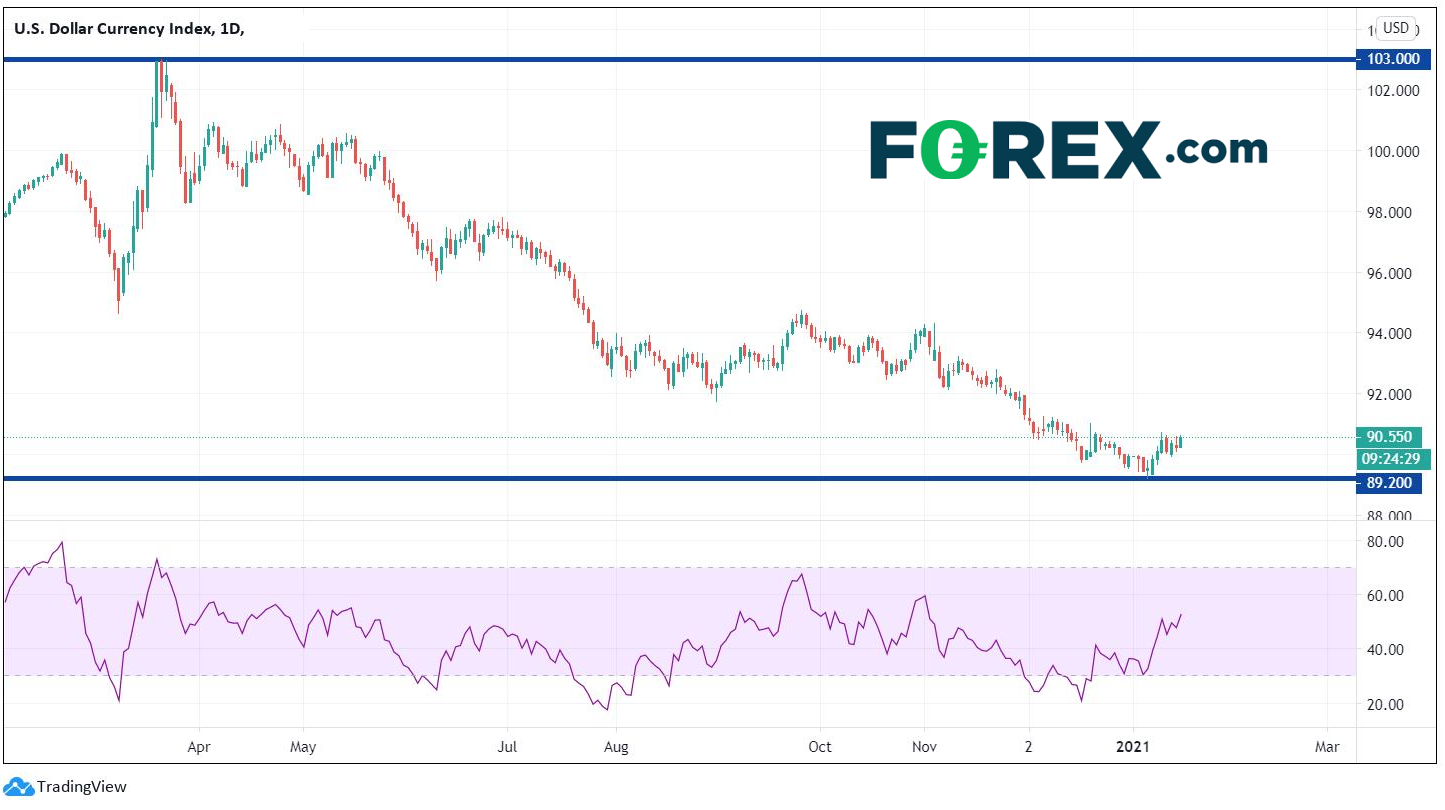 Theoretically, $1.9 trillion of stimulus added to the US economy should mean a lower US Dollar.  However, don’t expect Biden’s stimulus package to have the same effect on the US Dollar as the previous stimulus package.  When the first package was passed, the world was in the early stages of understanding the virus.  Although many countries are still trying to control the virus via lockdowns and restrictions, experts have more knowledge of the virus.  In addition, vaccines are available and will become more widely available come Q2, as warmer weather approaches.  With the near 13.4% depreciation in the US Dollar in March and the Federal Reserve on hold (for now),  could the stimulus package lead to a move higher in the US Dollar?  In this case it would be a reverse of the adage “Buy the rumor, sell the fact”.  For the US Dollar it could be a case of “Sell the rumor, buy the fact”.

Markets are forward looking.  A year into the pandemic, Joe Biden is proposing an additional $1.9 trillion in aid.  “How much more stimulus can the government afford?” is the question investors need to be asking themselves.  If traders don’t think there is much left in the tank, the US Dollar should head higher!

Technically, the US Dollar Index has already broken out of a descending wedge on the daily timeframe.  The target price on the breakout of a descending wedge is a 100% retracement, which would put price near 94.55, which is also the 38.2% Fibonacci retracement of the highs from March 2020 to the recent lows on January 7th and horizontal resistance from the March 2020 lows.   Price must first pass through strong horizontal resistance near 92.17.  Support below is at the January 7th lows of 89.20.   Below there is a series of lows from early 2018 near 88.25/88.50 and then horizontal support from 2013 near 84.40.

Biden’s stimulus plan provides an abundance of US Dollars into the economy, which theoretically should push the value of the US Dollar lower.  However, markets are forward looking, and this may be the opportunity to “buy the fact”!