What does the surprise BOE and less dovish ECB mean for the US Dollar Index (DXY)?

The Bank of England surprised markets AGAIN on Thursday with a hike in interest rates to 0.25%. (Recall at their last meeting they left rates unchanged when a hike was expected.) In addition, the ECB was slightly less dovish as Christine Lagarde announced that the central bank would end PEPP as scheduled. In addition, the ECB will still buy bonds under APP at the pace of EUR40 billion in Q2 and EUR30 billion in Q3.  It would then maintain bond purchases at EUR20 as deemed necessary.  The Great British Pound and Euro make up nearly 70% of the DXY. Therefore, decisions made by these central banks will affect the value of the US Dollar Index!

Everything you need to know about the US Dollar Index (DXY)

On a weekly timeframe, the DXY broke above the top trendline of the channel, which the index has been in since May 2021, only to close back inside each week. Often when price fails to break out of one side of a channel, it moves to test the other side.  The bottom trendline of the channel currently crosses near horizontal support at 94.65. The RSI is also in overbought territory on the weekly timeframe, an indication that the DXY may be ready for a pullback.  Strong horizontal support below there is at 93.35. 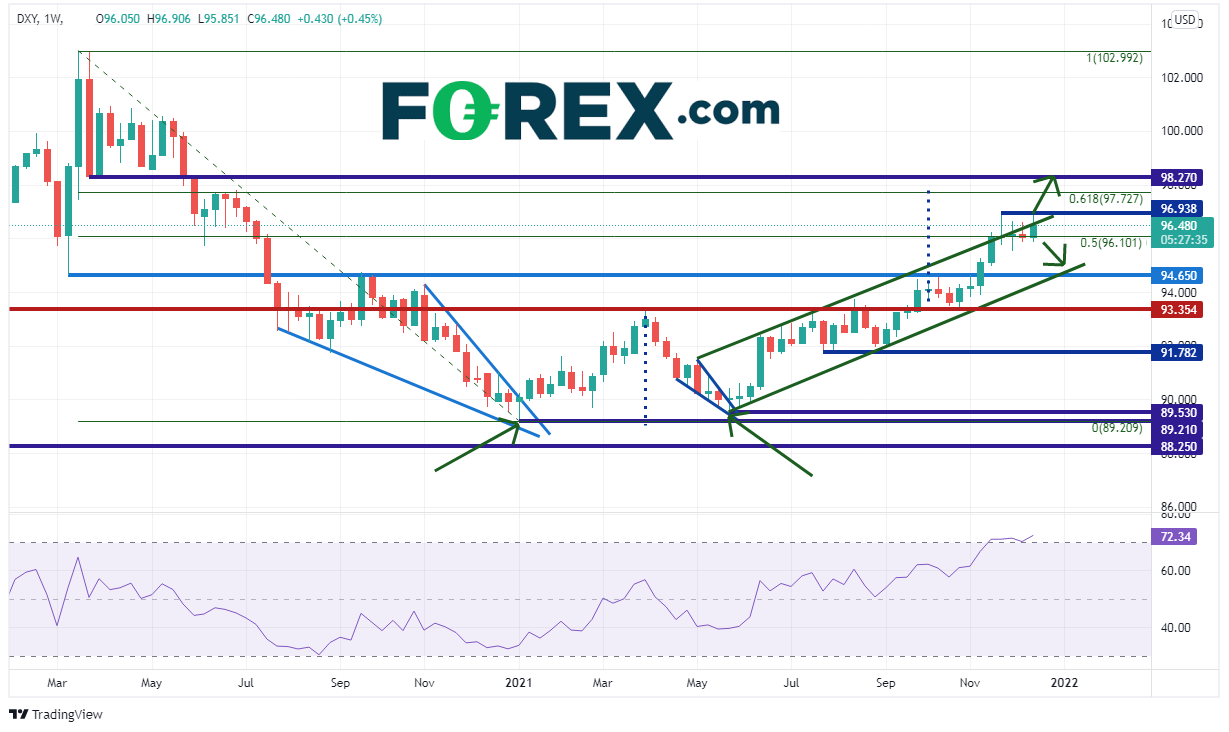 However, note the double bottom that the DXY broke out of during the week of September 27th. The target for the double bottom is near 97.90, which confluences with the 61.8% Fibonacci retracement from the March 2020 high to the January 4th low.  Just above there is horizontal resistance at 98.27.  If price breaks above, it can run up to the March 2020 highs at 102.99.

On the weekly chart of the DXY, the 97.90/98.25 area is an extremely important area for the index.  Although it is possible for the US Dollar index to pullback in the short-term to the bottom of the channel, it may move higher to test resistance area.  If it breaks through 98.27, it could be off to the races, as the pair heads towards the March 2020 highs!