What will it mean for the US Dollar if Senate passes extra stimulus? DXY, EUR/USD

If the bill is passed, the US Dollar should continue to weaken

On Monday evening in the US,  the US House of Representatives passed a revised coronavirus stimulus package which would give $2,000 in direct aid to eligible Americans, rather than the $600 which was passed in the original package, by a vote of 275-134.  This comes after President Trump blasted the original package for providing too much to foreign states, lobbyists, and special interest groups.  The vote now goes to the Republican controlled Senate, which is threatening to veto the bill.  Republicans have been looking for a lower payout in direct aid since day 1.  (Who would have ever guessed we would see Donald Trump and Bernie Sanders on the same page in stimulus!!).

If the bill is passed, the US Dollar should continue to weaken while stocks continue to rise.  More supply of funds for Americans to spend equals a lower price for the US Dollar.  DXY is currently trading in a support zone from the spring of 2018 between 89.00 and 91.00.  In addition, the US Dollar index is near the 161.8% Fibonacci extension from the September 2nd lows to the September 25th highs, near 90.00. It also broke through the apex of a near-term symmetrical triangle, while the RSI is diverging with price in the longer-term. 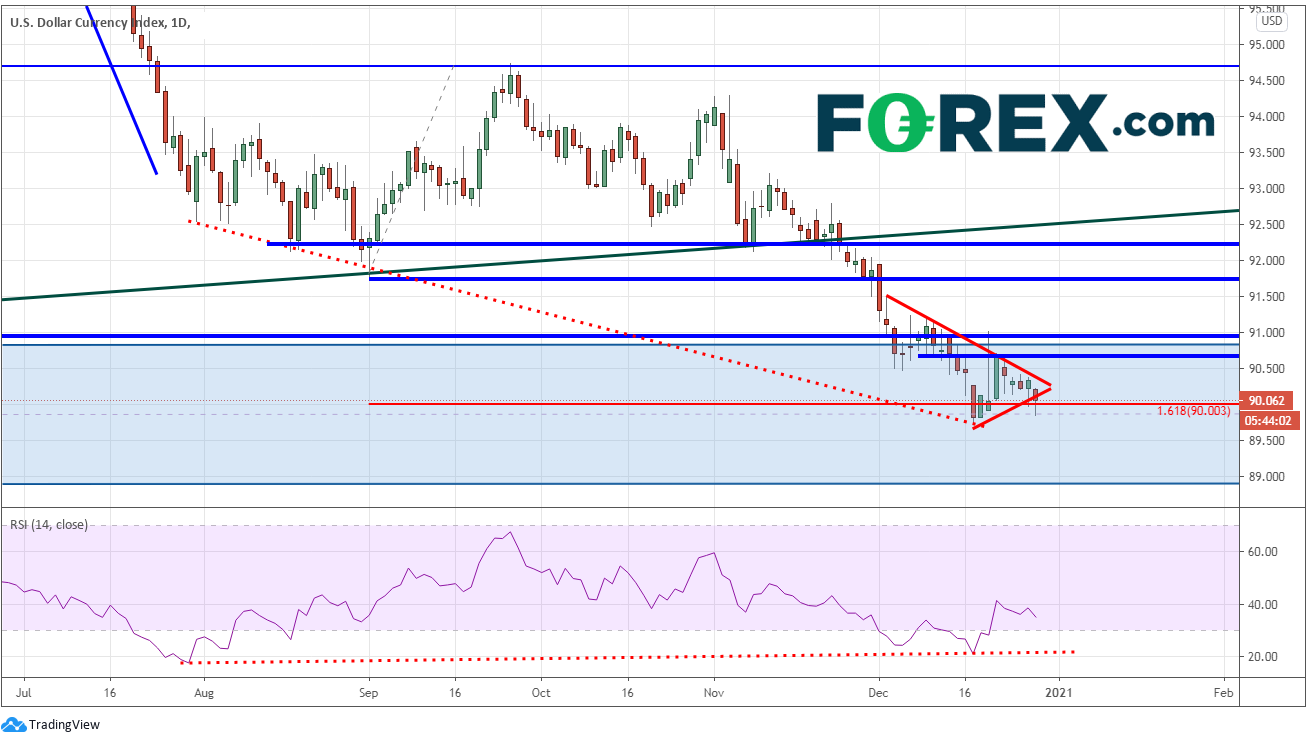 If the Senate passes the bill, price could close below the apex of the triangle and the 161.8% Fibonacci extension at 90.00, and then easily run down to the lower end of the support range near 89.00.  If the Senate reject the $2000 proposal in extra aid, it will remain at the current $600 and DXY will likely move higher.  Resistance is at the top of the symmetrical triangle near 90.37, horizontal resistance near 90.66 and the top of the support zone near 91.00.

We discussed the EUR/USD in the currency pair of the week.  The pair is currently sitting near a confluence of resistance near horizontal resistance and the 161.8% Fibonacci extension form the September 1st lows to the November 1st highs near 1.2255.  If the $2000 in direct aid gets passed by the Senate, traders can expect the US Dollar to weaken and, therefore, EUR/USD to move higher.  On a weekly timeframe, the next significant area of resistance is the highs from the week of February 2017 near 1.2555. Many of the US Dollar pairs are likely to move in a similar fashion if the $2000 in direct aid is passed (ie, weaker US Dollar).  Traders should be extra careful into year end as liquidity and volume is likely to dry up further.