What you need to know about the Amazon stock split

Amazon has become the latest member of Big Tech to announce a stock split, but what will this mean for investors and traders?

What is a stock split?

A stock split is when a company divides the number of existing shares in issue into multiple new shares, causing the number of shares to increase by a predetermined multiple. This is designed to reduce the price of each share without impacting the overall value of the business. Put another way, the size of the pie stays the same, it is simply cut into more slices after a stock split is complete.

For example, a 2-for-1 stock split would mean every existing investor will receive 2 shares for each 1 they already own. If they held 10 shares before the stock split, they would have 20 shares after the split is completed.

Read more: What are stock splits and how do they impact investors?

Amazon has announced it is conducting a 20-for-1 stock split later this year. This will mean that investors will receive 20 shares for every one they currently own. The calculation will be based on the number of shares held at the end of play on May 27.

This will be the first stock split Amazon has conducted since 1999 and the fourth one since it went public back in 1997. Shares have soared over 4,300% since the last stock split.

Amazon also approved a new $10 billion share buyback when it announced the stock split. That is significant considering Amazon has only bought back around $2.1 billion worth of shares since launching its last $5 billion buyback back in 2016, which the new programme has replaced.

When is the Amazon stock split?

The Amazon stock split is scheduled to take effect on or around June 3, with trading to begin on a split-adjusted basis when trading opens on June 6.

Shareholders will have to approve the proposal for it to take effect at the annual general meeting pencilled-in for May 25.

Why is Amazon conducting a stock split?

The primary function of a stock split is to reduce the value of each individual share in the business so they are more affordable to buy and trade, which in turn should improve liquidity by making its shares more accessible to more people.

It would cost you $2,936 to buy one Amazon share based on its closing price on March 10. That may prove a pricey investment for individual investors and those making their first foray into the markets. But the 20-for-1 stock split would bring that price tag down closer to $147 after it is completed. That will not only make the shares more accessible to more people but will also break a psychological barrier.

Read more: What is the most expensive stock in the world?

It has also been flagged that the stock split could be a way improving incentives for staff amid a tighter labour market. Amazon said the split would provide ‘more flexibility in how [employees] manage their equity in Amazon and make the share price more accessible for people looking to invest in the company’. The firm said last month that it is raising its base pay rate up to a maximum of $350,000 from $160,000 beforehand.

Amazon is the latest member of Big Tech to launch a stock split in recent years. Its announcement came just weeks after Alphabet announced plans for a 20-for-1 stock split that will be completed later this year, while Apple, Tesla and NVIDIA are among other major players to have conducted stock splits since the start of 2020.

Apple shares have risen 27% since completing its 4-for-1 stock split in late August 2020, while Tesla has jumped 89% after splitting its stock on a 5-for-1 basis around the same time. NVIDIA has risen 72% since dividing up its shares on a 4-for-1 basis in July 2020. 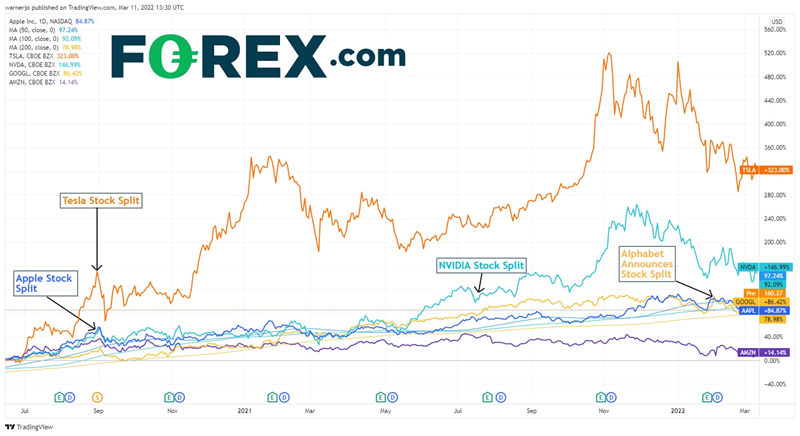 Research from Bank of America suggests stock splits have historically been bullish for companies that complete them and that they tend to outperform the wider market during the 12 months after the split has happened. The below shows the bank’s research on the average returns delivered by companies that have split their stock since 1980 compared to the S&P 500, based on the 3-months, 6 months and 12 months after a split has been completed:

How to trade the Amazon stock split

The fact Amazon shares have climbed higher since announcing the stock split suggests investors welcome the attempt to improve liquidity and believe it will be supportive by making the stock more accessible to more investors and traders.

This could help provide support for Amazon shares, which continue to significantly underperform versus other members of Big Tech. While the likes of Alphabet rose 65% in 2021 and Microsoft jumped 51%, Amazon shares rose by a tepid 2.4% - and all of Big Tech has come under pressure since the start of 2022 as supply chain problems and inflation weigh on sentiment.

But it is important to remember that this does not change the underlying fundamentals of the business or add any value to the company.

You can speculate on how the stock split will impact Amazon shares with Forex.com in just four steps: