Airbnb Q2 preview: where next for Airbnb shares?

Airbnb is expected to benefit from the rebound in travel when it releases second quarter results this week, but questions remain over the outlook for the rest of the year. We explain what to expect and consider how Airbnb shares could react to the earnings.

When will Airbnb release Q2 earnings?

Airbnb will release second quarter results after the US markets close on Thursday August 12.

Airbnb Q2 earnings preview: what to expect from the results

Airbnb said the rebound in travel had firmly started when it released first quarter results back in May as people started to travel again thanks to vaccination programmes progressing and restrictions being eased.

This allowed Airbnb to return to topline growth for the first time since the crisis erupted and for revenue to surpass pre-pandemic levels, accompanied by narrower losses. Although bookings still have some way to go before fully recovering, revenue has bounced back quicker thanks to considerably higher average daily rates, predominantly driven by the North American market.

Investors are expecting this trend to continue when it releases second quarter results. Bookings will be considerably higher year-on-year as it will be flattered by weak comparatives from the year before, when restrictions were introduced and cancellations increased. However, Airbnb has said bookings will remain below pre-pandemic levels.

However, gross booking value is set to soar past pre-pandemic levels thanks to the higher average daily rates and revenue is set to come in broadly level with the second quarter of 2019. Airbnb has said adjusted Ebitda should come in at ‘breakeven to slightly positive’.

Analysts are expecting revenue to rise to $1.25 billion in the second quarter from just $334.8 million the year before when demand was subdued due to lockdowns. It is expected to turn to adjusted Ebitda of $41.2 million from a $397.5 million loss, while its net loss at the bottom-line is forecast to narrow to $281.2 million from $575.6 million.

That would also compare favourably to the first quarter of 2021 as the recovery gains pace. Airbnb reported revenue of $887 million, an adjusted Ebitda loss of $59 million and a hefty net loss of $1.17 billion in the first three months of the year. Notably, the large loss was driven by $782 million of one-off items unrelated to the day-to-day running of the business.

While there is little doubt that Airbnb will post a significant improvement in the second quarter, the outlook will be closely watched after the company warned in May that it was ‘too early to predict if the recovery will continue at the same pace in the second half of 2021’. It said whilst the North American market continues to demonstrate resiliency, uncertainty is greater in other regions around the world.

Still, pressure is on for Airbnb to steadily improve adjusted Ebitda as the year goes on after it said it planned to cut variable costs, tightly manage fixed costs and reduce spending on marketing by making it more efficient. That is expected to lead to better earnings in the second half compared to the first.

Airbnb went public on the Nasdaq last December at an IPO price of $68. The stock immediately found higher ground and ended its first day of trading closer to $140 but the company has struggled to find higher ground since then. Airbnb shares hit an all-time high of $212 in February 2021 but trade closer to $150 today.

Brokers remain bullish on Airbnb’s prospects, with an average Buy rating on the stock and a target price of $174.61 – some 16.8% higher than the current share price.

Turning our attention to the chart, ABNB has tested support at $130 twice in the last three months but found fresh buying demand on each dip. That area should provide a floor under any near-term dips, but it remains to be seen if the stock can break conclusively through $155 and shift the medium-term bias in favour of the bulls.

Given that the most recent “trend” leading into the current range was bearish, traders may want to be cautious with short-term buy trades unless and until there’s confirmation of a bullish break. 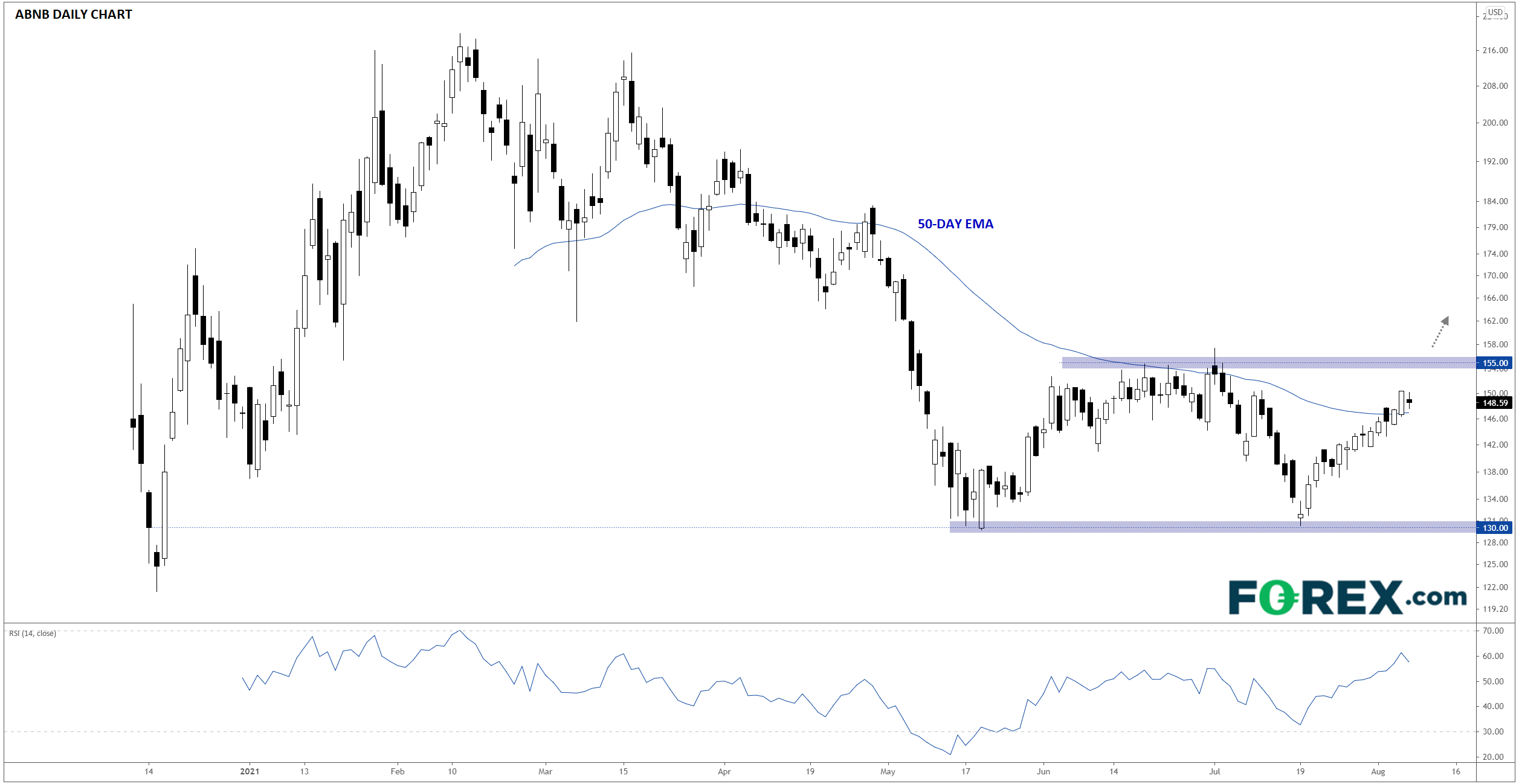 How to trade Airbnb shares

You can trade Airbnb shares with Forex.com in just four steps: