Alphabet Q1 preview: Where next for Alphabet stock?

Alphabet is forecast to deliver strong double-digit growth in the first quarter, but this is expected to slow significantly as it moves through 2022.

When will Alphabet release Q1 2022 earnings?

Alphabet will release its first quarter earnings after US markets close on Tuesday April 26.

US earnings season gets into full swing this week and Big Tech dominates the corporate calendar. Microsoft is due to report on the same day as Alphabet, while Meta will follow on Wednesday before Apple and Amazon round things off on Thursday

Alphabet makes the bulk of its revenue and virtually all its profits from advertising on Google’s vast array of services, predominantly focused on its monopoly over online searches, and supplemented by YouTube and other apps like Maps and Shopping. We have seen social media platforms, which have been used to swallowing up a large chunk of company’s advertising budgets, start to come up against headwinds as competition for user time intensifies and privacy changes introduced by Apple last year makes it harder for them to target ads and track user’s online behaviour, but Google has so far proven to be far more resilient thanks to the diversification of its services and the role it plays as the gateway to the internet. Analysts believe Google Services – which makes the bulk of income from advertising – will report a 22% year-on-year rise in revenue in the first quarter to $62.6 billion. While strong, that will mark the slowest pace of growth seen in over a year, partly because of strong comparatives from 2021. Topline growth is forecast to slow to less than 16% in the second quarter as a result.

Google Cloud is still a relatively small player within the cloud-computing market. Data from Statista suggests it is the third largest player with a 10% share of the global market, but this is dwarfed by Microsoft Azure at 21% and the market leader Amazon Web Services, which is thought to control one-third of the market. Still, Google Cloud has been nabbed a larger slice of the pie in recent years and it is the fastest-growing part of Alphabet’s business, with analysts expecting the unit to report a 42% year-on-year rise in revenue to $5.8 billion. That is despite the tough comparatives from last year and demand for cloud-computing is seen as more resilient than some of the areas that Big Tech focuses on, such as online advertising or hardware sales. Still, it is not immune to the weaker economic outlook and analysts believe this will suffer a slowdown in topline growth in the second quarter.

The main challenge with Google Cloud, however, remains the fact it is not yet profitable while rivals Amazon and Microsoft both reap huge rewards from their cloud-computing units. Google Cloud booked over a $3 billion operating loss in 2021 and is forecast to report a similar-sized loss in 2022.

Commentary around the outlook will be keenly watched by markets to see how confident the board is feeling about the remainder of this year. It is expected to continue delivering double-digit growth in both revenue and EPS in the second quarter, but both will suffer from a slowdown compared to the first.

All of Big Tech will see their growth slow in 2022 following the record year in 2021 and while Alphabet is forecast to deliver impressive topline growth of over 17% in 2022, it is set to deliver a tepid 3.7% growth in EPS after the figure more than doubled in 2021.

Alphabet shares have proven highly volatile in 2022 and have experienced some wild swings that have been capped by the all-time high of $3031 seen in February. However, we saw the stock close at its lowest level in nine months yesterday at $2496.

That has come hot on the heels of the 200-day moving average, which provided a bearish signal when it crossed above the 50-day metric last month, moved above the 100-day moving average last week to suggest the stock could come under further pressure. That is reinforced by the fact the RSI remains in bearish territory and fairly steady trading volumes over the last 30 days. If that proves true, we could see the stock fall back to levels seen last June, when it struggled to break above a level of resistance at $2463. A move below here could open the door to sub-$2400.

Alphabet shares traded comfortably above all three moving averages in the 18 months to the end of 2021 but have struggled to remain above them in 2022. It needs to recapture the 50-day sma at $2682, the 100-day at $2751 and then the 200-day sma at $2770 before it can target the top of the last leg higher at $2859. Notably, only one of the 52 brokers that cover the stock are hesitant over Alphabet’s value and they believe it can rise almost 38% over the next 12 months and hit a significantly higher all-time record high with an average target price of $3466. 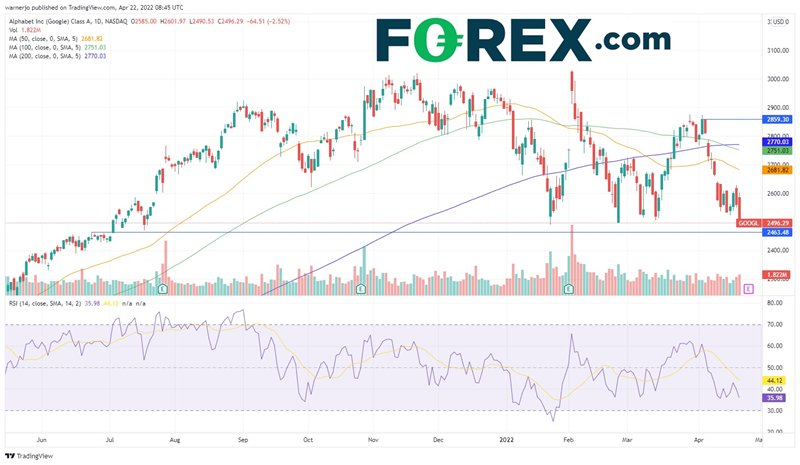