BP Q2 preview: where next for the BP share price?

BP shares are in play ahead of its next set of quarterly results and dividends and buybacks are under the spotlight now that oil firm has cut down its debt and market conditions are improving. We explain what to expect from the earnings and look at how the BP share price could react.

When will BP release its Q2 results?

BP will release earnings for the second quarter on the morning of Tuesday August 3.

BP Q2 earnings preview: what to expect from the results

BP’s transformation is set to continue when it reports its next set of quarterly results. The company surprised the markets earlier in 2021 after reaching its debt target around one year earlier than expected, fuelled by an acceleration in asset sales and a recovery in oil prices. That means BP has deleveraged itself and can now funnel more cash toward other areas, such as investing in the costly transition to cleaner energy and returning more cash to shareholders.

That prompted BP to launch a $500 million share buyback that was completed in the second quarter, complimenting the first-quarter ordinary dividend of 5.25 cents, flat from the previous quarter but still half what it was paying before the pandemic hit.

The intention going forward is to return 60% of surplus cash through buybacks, with the other 40% being hoarded in order to strengthen the balance sheet. This means surplus cashflow will be closely-watched. BP generated $1.7 billion in surplus cash in the first quarter but there are headwinds that could limit it in the second, primarily a $1.2 billion charge being booked related to the oil spill in the Gulf of Mexico back in 2010. That, combined with other charges and a smaller improvement in refining margins, prompted BP to warn that it expected to be ‘cashflow deficit’ in the second quarter.

Still, analysts are confident that shareholders will be rewarded even if second quarter cashflow is held back given the improving market conditions as prices recover and the global economy reopens. Oil prices hit their highest level in almost two years during the second quarter and refining margins have also improved significantly. BP will unveil its buyback plans for the third quarter when it releases its results and estimates from Bloomberg suggest a further $1 billion to $2 billion could be returned in 2021. Plus, an increase in its dividend has not been ruled out.

The headline figure that to be watched by analysts is underlying replacement cost profit. A consensus from Reuters shows markets are expecting a profit of $2.05 billion while a Bloomberg one places the figure slightly higher at $2.13 billion. That would compare favourably to the large $6.68 billion loss booked in the second quarter of 2020 but would be down from the $2.63 billion in profits booked in the first quarter of this year.

BP’s results will follow on from rival Shell’s second quarter results that were released on Thursday, when it beat earnings expectations. Shell, lagging slightly behind BP in terms of deleveraging, revealed it too has cut debt down enough to reintroduce a progressive dividend policy and launched a new $2 billion share buyback that will be completed before the end of the year. It rebased its quarterly payout to $0.24, some 38% higher than what was paid in the first quarter, and said its progressive policy aims to grow payouts by 4% per year.

Brokers remain bullish on BP’s prospects. The 27 brokers that cover the stock have an average Buy rating on the stock and a target price of 358.18 pence – over 20% higher than the current share price. 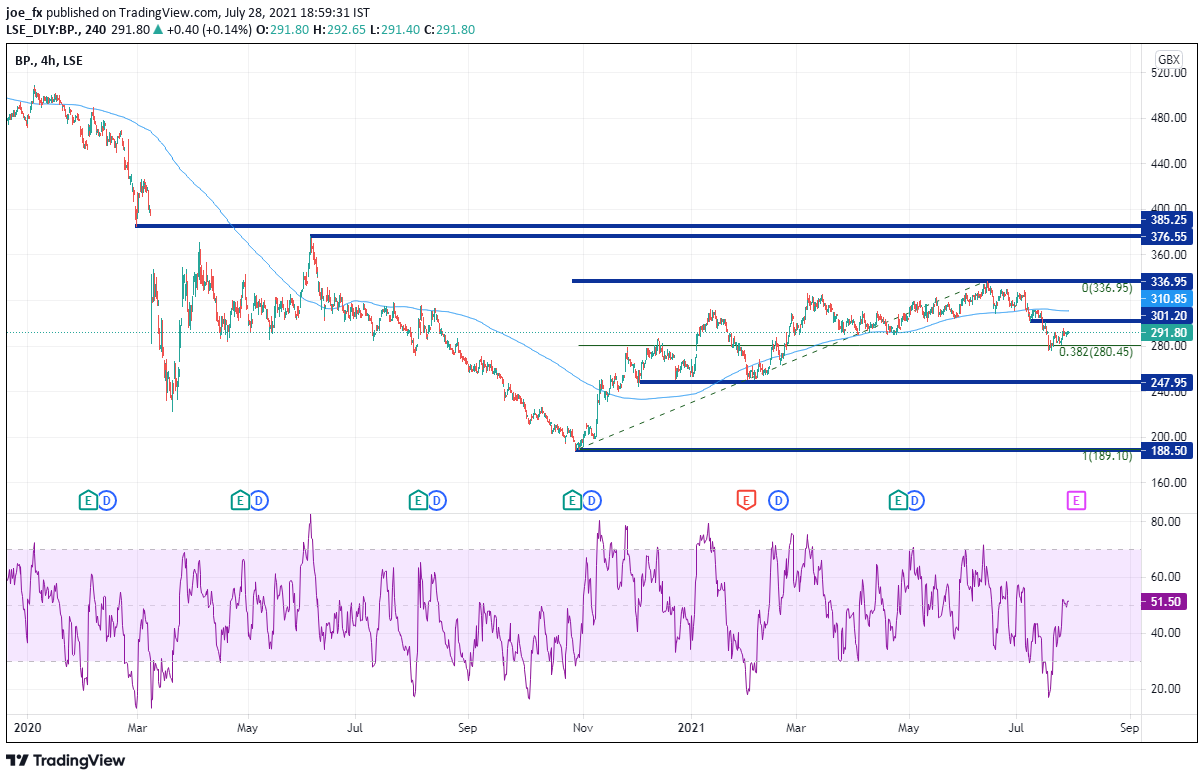