Micron Q3 preview: Where next for MU stock?

Micron shares have been swept up in the broader selloff in stocks this year but is still delivering impressive growth accompanied by a bullish outlook.

When will Micron release Q3 earnings?

Wall Street forecasts Micron will report a 16.5% year-on-year rise in sales in the third quarter to $8.65 billion and adjusted EPS is expected to grow over 30% to $2.44.

Micron has set the bar high after vowing to deliver record revenue and ‘robust profitability’ this year, representing a rare buoyant tone in the current climate as rampant inflation and a weaker growth outlook hurts the prospects for most stocks this year.

One of the reasons Micron is managing to grow earnings at a faster rate than revenue is the fact profitability has been on the rise as it shifts more to catering to data centres and industrial applications and analysts think the company’s gross margin could hit 48% in the quarter. Still, lower-margin sales to the smartphone and computer markets still accounts for over half of all revenue and any softness here amid the cost-of-living crisis could be significant.

Plus, numerous analysts have flagged prices of both DRAM (which are primarily used for temporary storage on computers, servers, and mobile devices) and NAND chips (which provide permanent storage) could come under pressure in the second half of the financial year, partly because customers have sizeable inventories of memory chips as they wait for supply constraints impacting other key components to ease. This means demand and pricing are both partially reliant on how the shortage in other chips and components pans out going forward.

With that in mind, the outlook for the fourth quarter will set the tone for how it will end the financial year and could prove influential in how markets react to the update. Notably, Micron beat its own guidance in the last quarter. Wall Street has currently pencilled-in an 11.9% rise in revenue in the final three months of the financial year to $9.26 billion and 10.2% growth in adjusted EPS to $2.67.

Assuming Micron meets expectations, that puts the company on course to report a 20.6% rise in annual revenue this year and a 56% jump in adjusted earnings, which would be all the more impressive considering EPS more than doubled last year. However, it is worth noting that Wall Street has become more cautious by lowering its expectations on Micron in recent months.

Micron shares have been caught up in the broader selloff to hit stock markets in 2022, having plunged by almost 40% since peaking at all-time highs back in January.

The downtrend accelerated earlier this month and pushed the stock to a 19-month closing low of $55. This should be regarded as the initial floor considering it is in-line with a key level of resistance two years ago, supported by the fact this caused the RSI to slip into oversold territory to suggest this is low enough to attract buyers back into the market. However, there has been a notable dip in the average volume at time over the past five days, which casts some doubt that the recent rise can gain momentum. The drop could be fairly swift should this floor fail to hold as this opens the door to the next two downside targets of $49.30 and $44.50.

Although the stock looks to have reversed course, it still has a long way to go to install confidence that it has broken out of the downtrend that has been in play since February. It needs to first recover back above the 2021-low at $66 and recapture the 50-day moving average to signal that it can find higher ground. That would allow it to target the 100-day moving average at $74.50 and the 200-day moving average at $77. Notably, the 37 brokers that cover the stock remain bullish with an average target price of $98, implying the stock can rise by over two-thirds from current levels and once again test the all-time highs seen in January. 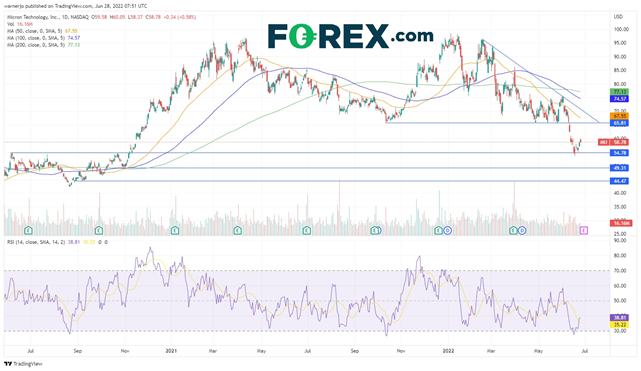