NIO Q2 preview: where next for the NIO share price?

NIO delivered a record number of cars during the second quarter, setting the stage ahead of its earnings later this week. We look at what to expect from the results and consider how NIO shares could react.

When will NIO release Q2 results?

NIO will release second quarter earnings after the US markets close on Wednesday August 11.

NIO Q2 earnings preview: what to expect from the results

We already know that NIO delivered 21,896 electric cars in the second quarter – more than double what it produced the year before and marking a new quarterly record for the company. That was up from the record 20,060 cars delivered in the first three months of the year.

That is expected to continue driving strong topline growth and investors will also be hoping it can lead to improved profitability too. The company achieved a vehicle margin of 21.2% in the first quarter and this will be closely-watched this week. Investors are hoping NIO can retain a strong margin despite several headwinds, including the problems in the supply chain amid the global shortage in semiconductors and rising prices for the key commodities used to make cars and their batteries.

Increased investment in new stores, with Bloomberg forecasting it opened 30 new stores during the second quarter including two costly Nio House sales outlets, and the rollout of its new and improved charging stations could also weigh on profitability. Investors will also be hoping that NIO can deliver another quarter of positive operating cashflow despite the heightened spending activity.

Analysts are expecting revenue in the second quarter to rise to RMB8,322 million from RMB3,719 million the year before, and for the loss per share to narrow to RMB0.53 from RMB1.15. That would be at the higher end of NIO’s target to make RMB8,146.1 and RMB8,504.5 million in revenue.

NIO has posted significantly larger losses than what markets expected during the last two quarters, having beaten expectations during the three quarters prior to that.

Wall Street is bullish on NIO’s prospects, with the average rating among 21 of them at Buy with a target price of $55.74, implying there is up to 27% potential upside from the current share price.

Since falling a quick -50% through the first quarter of the year, NIO has stabilized in the $32-$52 range for the past five months. The EV space as a whole has seen some of its earlier speculative froth recede, but NIO is holding up relatively well, finding support at its (marginally) rising 200-day EMA. Heading into earnings, support is likely to emerge on any dips toward the 200-day EMA around $40, while a strong reading could push NIO above near-term resistance at $47 for a potential continuation toward $52 next. 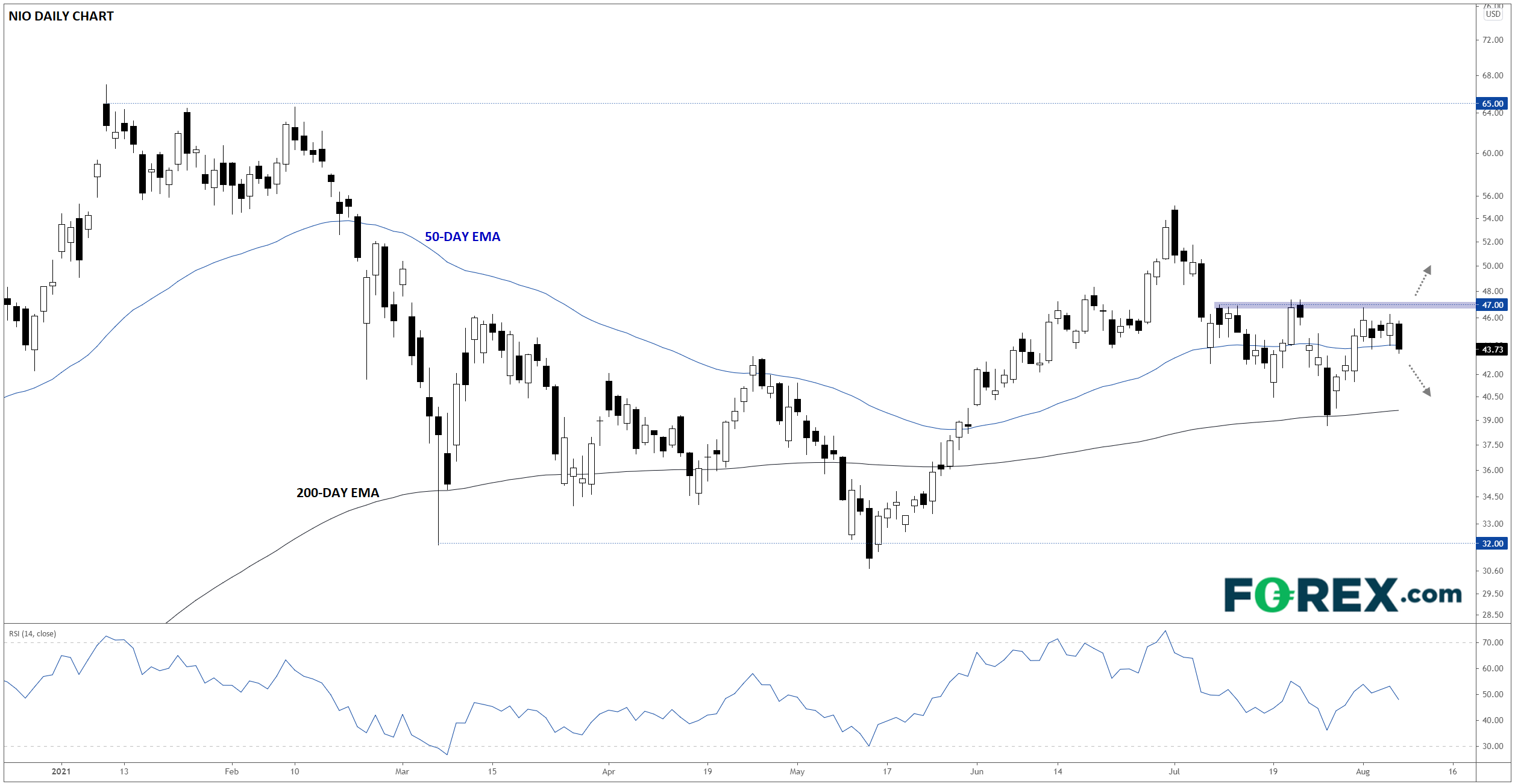 How to trade NIO shares