Snap Q2 earnings preview: where next for Snap shares?

Snap delivered its fastest growth in three years during the first quarter and the social media platform is expected to keep up the momentum in the second by beating its own guidance. We explain what to expect from the results and consider where the Snap share price is headed.

When will Snap release Q2 earnings?

Snap is scheduled to release second-quarter earnings on Thursday July 22.

Snap preview: what to expect from the results

Snap has set the bar high for its second quarter earnings after delivering an impressive start to 2021. The company delivered its fastest revenue and user growth in three years in the first three months of the year and it reported its first quarter of positive free cashflow in its history.

Wall Street expects the 22% year-on-year growth in daily active users (DAUs) reported in the first quarter to hold steady in the second. That should see DAUs rise to 290.6 million at the end of June from 280.0 million at the end of March. Analysts are expecting DAUs to rise by over 5% in North America and 11% in Europe but anticipate the fastest growth to come from the rest of the world, which is forecast to see a 52% jump in DAUs.

That level of international growth would be welcomed by shareholders considering Snap lags other major social media platforms in terms of users outside the US. The recent partnership formed with Samsung should help going forward, and it is notable that the majority of Snap’s DAUs swung to Android users from iPhone users for the first time ever in the last quarter.

The expanding suite of products, such as its TikTok-rival Spotlight that showcases the best Snaps uploaded to the platform and its augmented reality camera lenses, is helping attract more users and drive engagement. For example, over 125 million users have used Spotlight since it has been launched and it is now live in 14 countries, while daily use of its Lenses product jumped 40% in the first quarter.

Snap, along with other social media platforms, are also expected to benefit from an anticipated rise in advertising spend by businesses as the economy reopens.

Snap has said it is aiming to deliver second-quarter revenue of between $820 million and $840 million and that adjusted Ebitda could come in anywhere from a $20 million loss to breakeven. That compares favourably to the year before, when it reported $454 million in revenue and a $96 million loss.

Notably, analysts are expecting Snap to beat its targets with revenue of $845.5 million and adjusted Ebitda of $2.6 million. Wall Street expects Snap to remain in the red at the bottom line but to post a narrower net loss of $270.7 million compared to the $328 million loss booked the year before.

Brokers are bullish on Snap shares ahead of the quarterly results. The 39 of them that cover the stock have an average Buy rating on the stock and a target price of $77.72 – implying over 30% upside from the current share price. Snap shares have risen over 20% since the start of 2021, outperforming the 15% increase booked by the S&P 500.

Snap had been moving higher during the first 2 months of the year and put in a high of 73.59 on February 25. The price pulled back to the 38.2% Fibonacci retracement level from the March 2020 low to the February highs, near 48.26 on March 31. Since then, price has formed a symmetrical triangle and is currently coiling as it trends towards the apex.

The price action of symmetrical triangle typically breaks out in the same direction as it had been moving before it entered the triangle.  In this case, that would be higher.  Support is at the bottom trendline of the triangle near 54.05, horizontal support and the previously mentioned 38.2% Fibonacci retracement level at 48.26, and then the gap opening from October 21, 2020 near 34.52. 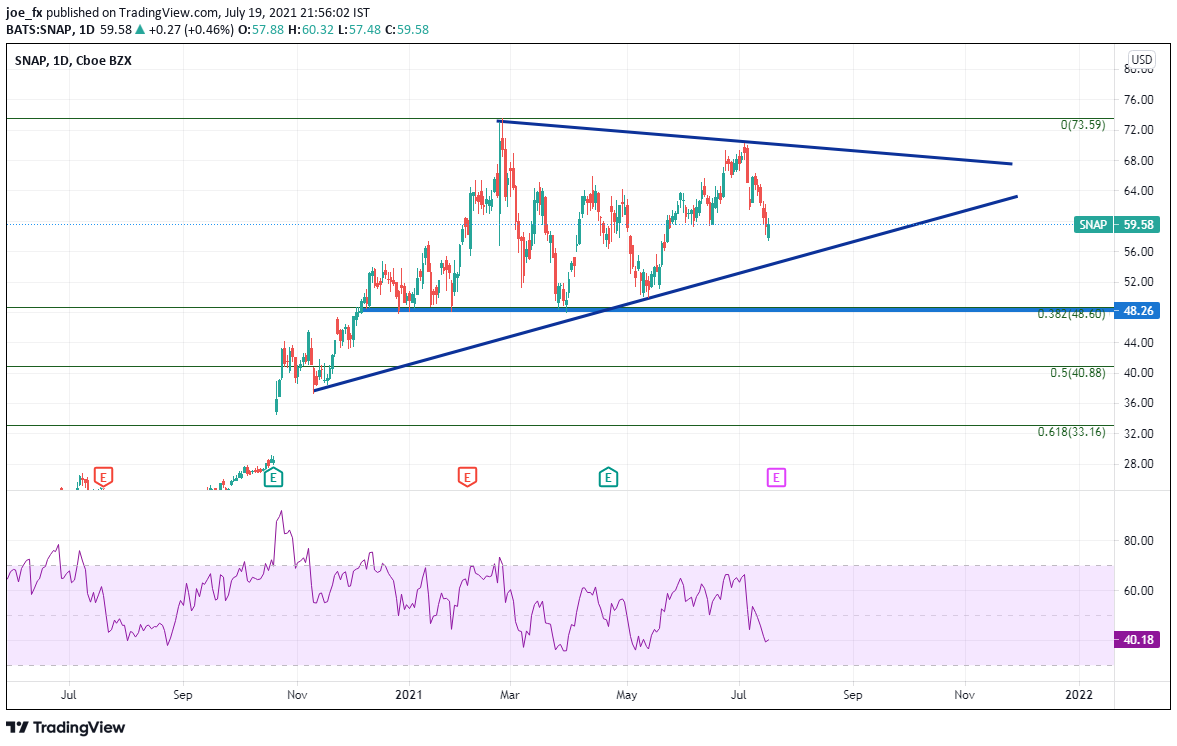 How to trade Snap shares

You can trade Snap shares with Forex.com by following these four easy steps: