Tencent Q2 preview: Where next for Tencent stock?

Tencent is forecast to report its first-ever drop in revenue as the tough environment in China takes its toll.

When will Tencent release Q2 earnings?

Tencent is scheduled to release second quarter earnings on Wednesday August 17 at 2000 in Hong Kong, or 0800 Eastern Time in the US.

Revenue is forecast to drop 1.9% from last year in the second quarter to RMB135.6 billion and adjusted diluted EPS is forecast to fall over 28% to RMB2.51.

Below is an outline of what analysts expect for each division in terms of second quarter sales, according to the latest consensus numbers from Bloomberg, alongside with quarterly results over the past year:

This could be a tough week for Tencent. The Chinese giant is forecast to report its first-ever drop in revenue and a third consecutive quarter of lower earnings in the second quarter as Covid-19 restrictions in China, regulatory pressure and a weaker macroeconomic climate all take their toll.

We saw fellow Chinese behemoth Alibaba, which makes most of its money from ecommerce, cloud computing and digital entertainment, release earnings earlier this month. The company delivered the first flat sales growth on record, although this was better than anticipated considering markets expected it to report its first drop in sales. That will provide some hope that Tencent can also avoid reporting a fall in revenue this week, although the variety of headwinds facing the largest Chinese stocks continue to plague the outlook.

China was plunged back into lockdown in March as the country persists with its zero-tolerant approach to the virus. That had a severe effect on the economy, with China’s GDP growth stalling to just 0.4% in the second quarter compared to 4.8% in the first. The deterioration prompted Chinese officials to abandon their goal to deliver 5.5% growth in 2022, instead adopting a line to deliver the best growth possible in tough conditions. The pandemic has derailed the unbridled growth delivered by China over recent decades, where it has consistently delivered its ambitious targets.

This is set to apply further pressure on Tencent’s Fintech & Business Services arm which is predominantly driven by payments. The brakes were already being applied to growth before the latest Covid-19 restrictions were introduced and is expected to rise just 2.8% from last year to RMB43.08 billion in the second quarter. Economic woes and lockdowns will have curtailed commercial payment volumes and prompted consumers to pullback spending on everything from transport to clothing.

If things weren’t tough enough, China’s largest digital tech companies have remained under fire from regulators that have been tightening the leash on the country’s largest businesses and their dominance.

Tencent’s biggest revenue driver comes from online games. In fact, the company developed six out of the top 10 selling games in China in the first week of August 2022 – including well-known titles Honour of Kings and League of Legends. While investors had become used to rampant sales growth, this stalled in the first quarter of 2022 and is forecast to climb just 1.4% year-on-year in the second quarter to RMB43.6 billion.

The government has been the one to put its foot on the brakes as it becomes increasingly concerned about the impact of video games on younger audiences, so much so that it introduced rules last year that restricted children to playing games for just three hours each week. Regulators, which must give the green light to any new game designed to make money, also halted approvals for nine months and prevented the industry from launching new titles. While approvals restarted again in April, the industry is bracing for fewer approvals and stricter oversight going forward. The impact has been significant considering China’s video games sector saw revenue decline in the first half of 2022 for the first time since records began over 14 years ago. Meanwhile, stricter authorities have also already caused disruption, with Tencent being forced to abandon its video game streaming platform earlier this year after regulators blocked a proposed merger of two companies Tencent owns significant stakes in named Huya and DouYu on antitrust grounds. That was the first time regulators had scuppered a merger of two domestic tech companies. Meanwhile, Tencent’s hopes of countering problems at home by tapping overseas markets are also withering amid a slowdown in western gaming markets.

Revenue from social networks are expected to decline 0.1% in the second quarter to RMB29.02 billion. Growth has slowed for six consecutive quarters, and markets expect this to drop in the second quarter. While monetisation may be more difficult at present, user numbers of its core Weixin and WeChat apps is expected to continue to grow at a steady pace to end June at 1.29 billion, up 3.3% from last year and marking a mild increase from the 1.28 billion it had at the end of March.

The Value-Added Services division, which is made up of its gaming and social network arms, is forecast to report a 0.6% rise in sales in the second quarter to RMB72.45 billion.

Its online advertising division has also suffered in recent quarters thanks to a combination of new rules and weaker demand. New regulations have been introduced for online advertising as part of the widespread regulatory overhaul, and demand has also faltered as the virus and other headwinds hamstring China’s growth. Sales of online ads are forecast to decline for the third consecutive quarter by over 25.5% from last year to RMB17.00 billion in the three months to the end of June.

Growth is becoming more difficult to generate at a time when profitability is under pressure thanks to rising costs in the inflationary environment. Tencent’s operating margin is forecast to tighten to just 25.1% in the second quarter from 31% the year before as a pullback in marketing spend and a mild uptick in gross profits from payments fails to offset higher everyday costs and R&D investment, alongside lower profits from gaming and advertising.

With Covid-19 restrictions having eased and rival Alibaba pointing toward a better second half compared to the first, investors will hope Tencent will share that view and provide a rosier outlook this week. Still, markets believe Tencent will report just 3.3% revenue growth in 2022 and report its first-ever drop in annual adjusted EPS.

Where next for Tencent stock?

Tencent shares have lost over a third in value since the start of 2022 and over 60% since hitting their peak back in February 2021. As a result, we saw Tencent shares hit their lowest level since November 2018 at the start of this month as it continued to lose ground.

The RSI was pushed into oversold territory upon hitting that 45-month low of $36.57 at the beginning of August to suggest this should hold as a floor going forward, reinforced by the fact this also happened when the stock hit lows back in March. We may see $37.55 emerge as an intermediary level of support as this has held well over the past week.

The first upside target is $41.30, which proved to be a reliable level of support during April and May. Recapturing this would bring the 50-day and 100-day moving averages back into play before it can target a larger move back above $50, a level not seen for two months.

Trading volumes have been volatile over the past 20 sessions but have already started to pick up ahead of the results this week. 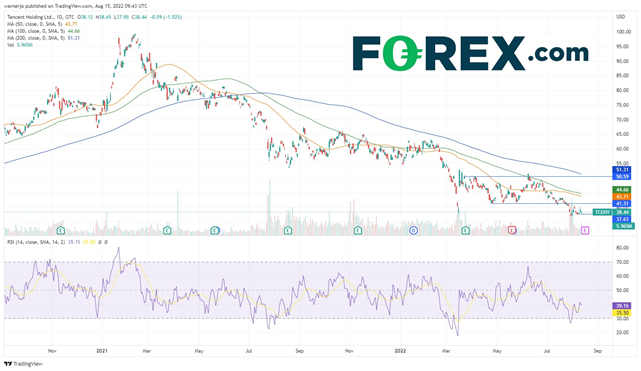 How to trade Tencent stock

You can trade Tencent shares with Forex.com in just four steps: