Where next for BP shares ahead of its quarterly results?

BP shares will come into play when it releases its first-quarter results, which should see the oil giant launch a new share buyback programme after reaching its net debt target earlier this month. We explain what to expect and look at where the BP share price could be headed.

When will BP release its Q1 results?

BP will release quarterly results covering the first three months of 2021 at 0700 BST on Tuesday April 27.

BP earnings consensus: What to expect from BP’s results

The oil industry is in recovery mode after being hit hard by the fall in oil demand during the pandemic, but prices and the outlook remain volatile. Brent plunged from over $68 a barrel at the start of 2020 to as low as $21 in April and ended the year at just over $50. Prices have shot up since and Brent is currently trading at around $64 as countries start to reopen and fuel hopes of a recovery this year.

The speed at which demand for oil recovers this year will largely depend on how quickly countries can rollout their vaccination programmes and get the global economy back up and running. Meanwhile, there seems little room for more supply to come into the market considering OPEC+ is committed to keeping a cap on output to support prices and growth in production from non-OPEC producing nations has been limited.

The improving environment is expected to see BP’s results improve significantly compared to both the previous quarter and the year before.

A Reuters-compiled consensus shows analysts are expecting an underlying replacement cost profit of $1.20 billion in the quarter, up from $115 million in the previous quarter and $791 million in the same quarter a year ago. Reported profit is forecast to jump to $2.95 billion from $1.35 billion in the fourth quarter of 2020 and swing from the hefty $4.36 billion loss booked in the first.

BP is likely to launch a new share buyback programme when it releases its results.

BP surprised shareholders earlier this month when it revealed it had reached its net debt target of $35 billion earlier than expected, driven by a better-than-expected performance in the first quarter and faster than anticipated asset sales.

With debt now under control, more can be funnelled elsewhere, including into shareholder’s pockets. BP pledged to return ‘at least’ 60% of surplus cashflow through buybacks once it had reached its debt target and promised to release ‘further information’ on its buyback plans when it releases its results.

BP has sold-off non-core assets in order to repay its debts and, although this is now within a sustainable range, it still intends to offload more. BP sold off $4.7 billion worth of assets in the first quarter alone and hopes to make up to another $1.3 billion by the end of the year.

This forms part of a wider strategy that aims to generate $25 billion worth of proceeds from disposals between the second half of 2020 and 2025 – with BP having agreed to sell $14.7 billion worth so far and received proceeds of $10 billion.

The asset sales have provided confidence that BP can afford to reward shareholders and drum up the cash needed to invest in its green future as it transitions away from oil as part of its commitment to become a net-zero carbon company.

BP has managed a swifter return to buybacks than its rival Shell. Shell is aiming to cut debt down to $65 billion from the $75 billion reported at the end of 2020 before buybacks can return. Although analysts are confident Shell can cut debt quickly this year, buybacks aren’t expected to make a comeback until 2022. Shell plans to return 20% to 30% of operating cashflow through buybacks and dividends once debt is under control. Shell releases its first quarter results on Thursday April 29.

BP has been on the rise since early November. The stocks had traded comfortably above its multi-month ascending trendline hitting a 9-month high of 326 in early March.

Since then, the price eased lower and has been trading within a horizontal channel since mid-March capped on the upside by 310 and on the lower band by 288.

The price just crossed below the ascending trendline earlier this week. It trades just below its flat 20 EMA and on its flat 50 EMA. The RSI is very mildly in negative territory but points flat.

The bias we are seeing is pretty neutral as investors look ahead to the results. The path of least resistance is marginally to the downside.

It could be prudent to wait for a post results breakout trade. The sellers would be looking for a move below 288 which could open the door to a deeper selloff towards 265.

Meanwhile, strong numbers and forward guidance could see the bulls push beyond 310 and head back towards 326. 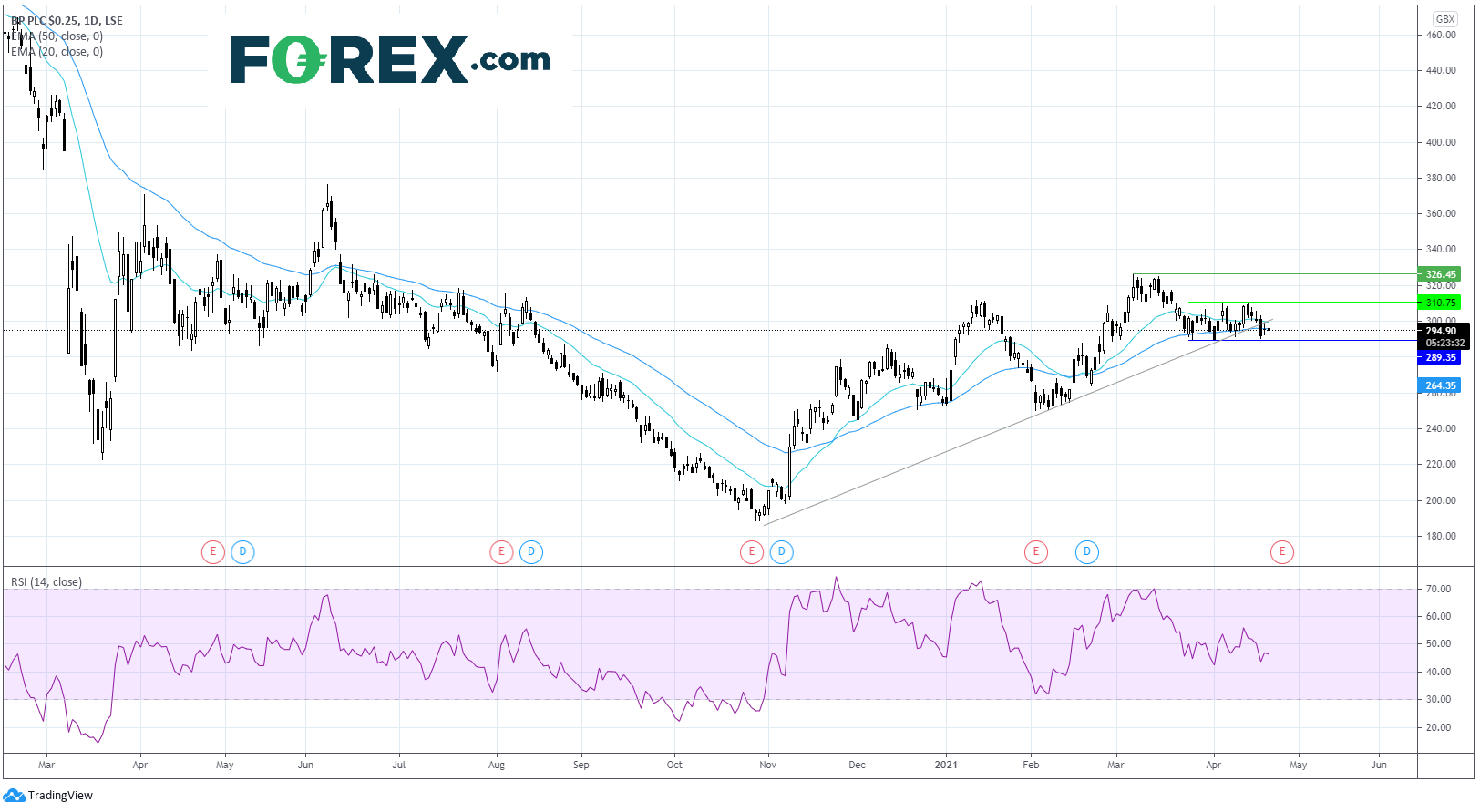 You can trade BP shares with Forex.com by following these four easy steps: