Disney Q3 earnings preview: where next for Disney shares?

Disney+ continues to attract subscribers and the rest of the business is expected to continue recovering from the pandemic. We explain what to watch out for when earnings are released this week and consider how the Disney share price could react.

Disney will release third quarter earnings after US markets close on Thursday August 12.

Disney Q3 earnings preview: what to expect from the results

Disney+ continues to go from strength-to-strength by attracting new users, but the rest of Disney’s vast business is still in recovery mode after being hampered by restrictions imposed because of the pandemic. Revenue declined from its parks, resorts and cruises division, its studio business that produces its array of film and TV content, and from its linear TV networks in the first half of the financial year, while its streaming business delivered 65% growth.

Theme parks are now reopen, studios are back in production and its TV networks are benefiting from the return of live sports. However, Disney warned in May that filming was still being disrupted by restrictions and causing delays, while sport was still being hit due to localised outbreaks of the virus, such as the suspension of the Indian Premier League in early May.

Investors will be hoping that conditions improved for both divisions in the third quarter. However, the biggest surprise could come from the parks and resorts division, which analysts expect to return to profit for the first time since the pandemic began. Plus, the fact its cruise ships only recently set sail again provides another catalyst for the division going forward.

Meanwhile, markets are anticipating Disney+ ended the quarter with around 112.3 million subscribers, up from 103.6 million on April 3. The addition of 8.7 million subscribers would match what was delivered in the second quarter but will still be far below the bumper 21 million additions it made in the first.

Analysts are expecting revenue of $16.76 billion and adjusted EPS of $0.55. That would compare favourably to the $11.77 billion in revenue and the loss per share of $2.61 booked the year before when results suffered due to the pandemic.

That would also represent a topline improvement from the $15.61 billion in revenue delivered in the first quarter as it started to stage a recovery, but a drop in adjusted EPS from $0.50. Profitability is expected to continue to be hit by the additional costs of having to adapt to restrictions and improve safety for staff and customers – with Disney having warned it could spend an extra $1 billion this year as a result.

Disney’s (DIS) stock has had a choppy, ultimately unproductive quarter, with prices oscillating around the $175 area without forming any durable trends. Traders of all persuasions will be hoping this quarter’s earnings report will be enough to wake “The Mouse” from its slumber, with technicians watching for a break above $186 to signal a bullish continuation toward the $200 area in time or a bearish breakdown through $168 to tilt the odds in favour of a deeper retracement to below $160. 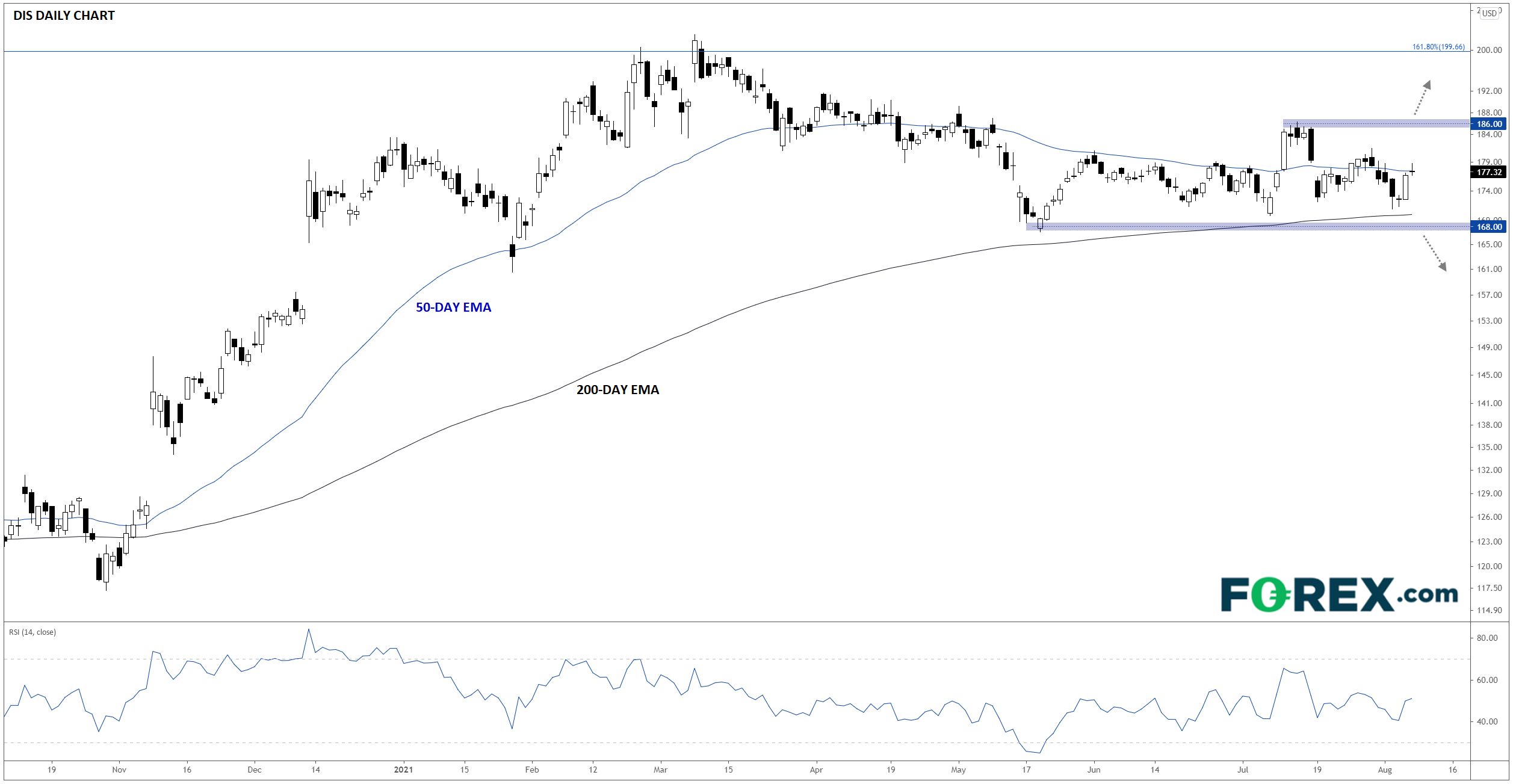