easyJet H1 preview: Where next for the easyJet share price?

Low-cost airline easyJet is a strong recovery play as travel rebounds this summer, but will rising costs and a shortage of workers hamper its ability to capitalise?

When will easyJet release H1 earnings?

Low-cost airline easyJet is scheduled to release interim results covering the six months to the end of March on the morning of Thursday May 19.

EasyJet has already provided a glimpse into what to expect when it releases interim results this week. The airline, along with its rivals, is expecting travel to boom this year as people make up for lost time after being discouraged from travelling over the past two years.

Capacity was equal to just 64% of pre-pandemic levels in the first quarter covering the last three months of 2021 and this only improved to 67% in the second quarter covering the first three months of 2022. However, capacity is set to recover to pre-pandemic levels this summer for the first time since the Covid-19 crisis began and was operating at 80% in March, up from 68% in February and just 50% in January.

‘Since the announcement to remove UK travel restrictions on 24 January, we have seen a strong and sustained recovery resulting in the proportion of bookings between the UK and EU now being broadly equal, which is where we would expect it to be based on our capacity allocation, compared to last year when the split reached around 70:30 EU vs UK with the strictest restrictions in place within the UK,’ easyJet said in its last update in April.

EasyJet has said capacity will return to 90% of 2019 levels in the third quarter covering April through to June before fully recovering in the fourth quarter between July and September. It is worth noting that easyJet Holidays is also improving and had already sold 70% of its schedule by mid-April, and at ‘significantly stronger margins’ than what was being achieved before the Covid-19 crisis.

Although easyJet is still operating well below normal levels, its performance in the first half will mark a significant improvement from the year before when the virus was causing far more disruption for the global travel industry. This is demonstrated by the fact easyJet carried 23.4 million passengers in the first half of the financial year compared to just 4.1 million a year earlier.

The airline has already said revenue will come in around £1.50 billion in the first half, up from £240 million the year before thanks to the recovery in passenger numbers. However, this will not be enough to cover the £2.05 billion in headline costs during the period, meaning easyJet will remain in the red and report a headline pretax loss of between £535 million to £565 million in the first half.

More people are flying now than at any point since the pandemic started but airlines are operating in a very different environment now than they were a few years ago.

Airlines are facing tough competition as they try to attract customers back and this is predominantly being battled through pricing, which will only become more important as people tighten their belts and seek value in an inflationary environment. But the consequence of this means easyJet made just £19.56 for each seat it sold in the first half compared to over £55.00 before the start of the pandemic.

The pressure on pricing comes at a time when costs are rising across the board. The biggest spike has been in fuel prices, but easyJet has hedged 64% of its fuel requirements in the second half of the financial year at $571 per metric tonne – marking a significant saving compared to the $1,100 spot price easyJet last reported in mid-April.

EasyJet and others have struggled to fulfil their schedules in recent weeks and months despite operating at below normal capacity due to Covid-19 causing staff to take more time off and because airlines are struggling to entice staff back into an industry that was so quick to dump them when trouble hit. That is not only hampering their ability to ramp-up capacity but is also forcing them to boost pay and incentives to ensure they have the workers they need to capitalise on the rebound in travel this summer.

The airline continues to burn through cash for now but has around £3.5 billion in cash and equivalents at the end of March, with £600 million of net debt.

The outlook for the remainder of the year will be closely watched. Analysts believe revenue will come in around £5.4 billion over the full year to the end of September. That would be 3.7x higher than the year before but still below the £6.4 billion delivered in the 2019 financial year. Any signal that it can return to profit this year would be welcomed considering analysts currently have a tiny headline loss before tax pencilled-in for this year and anticipate a significant rebound in the 2023 financial year.

The anticipated rebound in travel this year means easyJet is a prime contender to emerge as a strong recovery play over the next six to 18 months considering shares still languish almost 60% below where they sat before Covid-19 caused chaos for the travel industry back in February 2020.

Shares have been pinned down by a downtrend for almost a month, but buyers have re-entered the market after slipping past the November 2021-low of 479.7p, which should be treated as an initial level of support for the stock going forward. If this fails to hold, we could see shares swiftly fall back toward the 17-month low hit in March of 447.0p. Any move below there would reopen the door toward the pandemic-induced lows seen in 2020.

The stock needs to recapture all three moving averages to break above the last peak of 604.2p seen in April, roughly in-line with the 200-day sma. From there, it can target the 647.0p level of resistance seen throughout January and early February before bringing the 2022-high of 728.0p into its crosshairs.

The RSI remains in broadly neutral territory and trading volumes have seen a mild increase over the past 10 days, with the average-volume-at-time returning back above the 100-day average and experiencing a further lift over the most recent five days to suggest the mild recovery seen since last Thursday could gain momentum going forward. 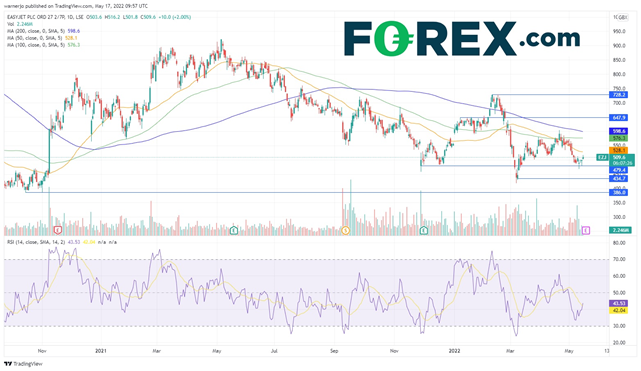 You can trade easyJet shares with Forex.com in just four steps: