Vodafone Q1 preview: where next for Vodafone shares?

Vodafone is expected to see top-line growth accelerate in the first quarter of its new financial year and brokers are bullish on the telecom giant’s recovery prospects going forward. We explain what to expect from the results this week and consider where Vodafone shares are headed.

When will Vodafone release Q1 earnings?

Vodafone is scheduled to release first-quarter results on the morning of Friday July 23. This will cover its performance over the three months to the end of June.

What to expect from the Vodafone results

Vodafone surprised the markets when it posted 0.8% organic service revenue growth in the final quarter of the last financial year, beating the 0.4% expected by analysts. Notably, the consensus anticipates growth will accelerate markedly to 1.9% in the first quarter. That will be flattered as Vodafone starts to come up against weaker comparatives from when results started to be hit by the pandemic, but it will be a welcome acceleration nonetheless.

Germany, by far Vodafone’s biggest market, returned to delivering organic service revenue growth in the second-half of the last financial year, exiting with 1.2% growth in the fourth-quarter, while continuing to decline in the UK, Italy and Spain. Investors will want to see growth in Germany accelerate and for a continued recovery in its three other core markets in the first quarter.

Watch for any changes to Vodafone’s outlook for the full year. The company is currently aiming to deliver adjusted Ebitda (which will be reported as ‘EBITDAaL’) of EUR15.0 to EUR15.4 billion and adjusted free cashflow of at least EUR5.2 billion. That can be compared to the adjusted Ebitda of EUR14.88 billion and EUR5.7 billion in cashflow delivered in the last financial year.

Notably, Vodafone shares have shed over 19% in value since it released its full-year results, spurred lower as earnings came in at the bottom-end of expectations and because markets were disappointed by its cashflow target after Vodafone said it was raising the amount it was spending on investment. Vodafone shares still trade some 26% lower than pre-pandemic levels.

Still, brokers believe Vodafone can not only recover all those losses but go on to hit levels not seen since 2018 with an average target price of 169.28 pence – implying over 47% potential upside from the current share price. The 24 brokers covering Vodafone have an average Buy rating on the stock, with 10 rating Strong Buy, 12 Buy and two at Sell.

The recovery prospects are underpinned by the reopening of the European economy. Lockdowns have meant people have used less mobile data and the lack of travel has meant less income from allowing tourists to piggyback of its network whilst travelling in Europe has also fallen. Handset sales have also been hit, but this is also being caused by customers delaying purchases to await a worthwhile model to upgrade to. Wholesale revenue also fell as other telecoms providers that use Vodafone’s network suffered similar problems.

The majority of these headwinds should ease as Europe reopens, although this looks likely to vary wildly country-by-country. Plus, investors will hope a recovery can finally start to unleash the benefits from the acquisition of Liberty Global, with the tailwinds seen last year being wiped out by the impact of the pandemic.

Vodafone has been trending lower since June 2015 when the stock price formed a high of 258.00.  In late February 2020, VOD move aggressively lower to 92.76 as the pandemic stuck.  Price bounced to horizontal resistance near 142.68 and began coiling in a symmetrical triangle.  The stock price briefly broke above the downward sloping trendline on the triangle in May, only to be rejected by the horizontal resistance at 142.68 once again and pushed back into the triangle.  As is often the case, when a price fails to breakout of one side of a pattern, it moves to test the other side.  Expectations for a symmetrical triangle are that price will break out in the same direction as when price entered the triangle.  In this case, that would be lower.

First support is near 111.25, near current levels. If price breaks below the triangle, there is horizontal support near 103.88, just ahead of the February 2020 lows at 92.76.  If price holds the trendline and moves higher, Horizontal resistance is at 125.64.  The top, downward sloping trendline of the triangle crosses near 135.00. 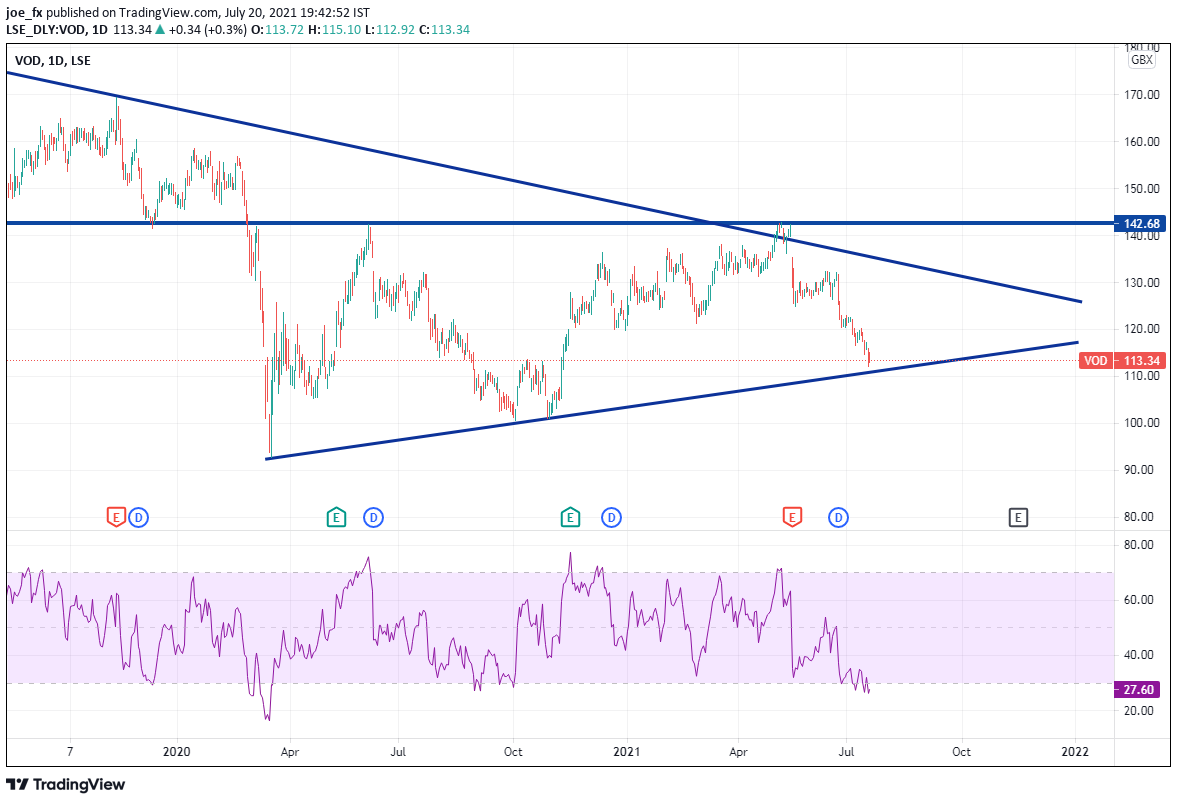 How to trade Vodafone shares

You can trade Vodafone shares with Forex.com in four steps: