The market stakes of this week’s negotiations couldn’t be higher – will US and Chinese negotiators be up to the task?

With little on the calendar over the next couple of day’s (tomorrow’s RBNZ meeting notwithstanding), the ongoing US-China trade negotiations will take center stage for traders.

To recap: The US has levied 25% tariffs on $50B of Chinese technology imports, along with 10% tariffs on $200B of other goods for the last ten months. In a tweet over the weekend, President Trump vowed to increase the 10% tariffs to 25% at 12:01 ET on Friday if a deal is not reached; he also indicated that he was considering implementing 25% import taxes on the rest of the $325B in Chinese imports that are not presently penalized. To put it simply, Trump’s threat has dramatically raised the stakes for this week’s US-China negotiations in Washington DC.

After initially hesitating, China is still sending a trade delegation, including chief trade negotiator Liu He, to the US this week. For traders, Thursday and Friday’s high-level talks between Liu, U.S. Trade Representative Robert Lighthizer, and Treasury Secretary Steven Mnuchin will be the key event to watch this month. From the market’s perspective, a “successful” negotiation will result in a scheduled Trump-Xi summit to sign a trade deal. Anything less, especially if it involves an escalation of tariffs on both sides, would be seen as a negative outcome for global risk appetite.

At the risk of stating the obvious, the trading relationship between the planet’s two largest economies has a dramatic impact on every single market across the globe. Speaking broadly, an escalation in tariffs would hurt risk-sensitive assets like high-yielding currencies, economically-sensitive commodities, and global stock indices (though S&P 500 traders are nonplussed so far) at the expense of “safe havens” (lower-yielding currencies, gold, and global bonds). 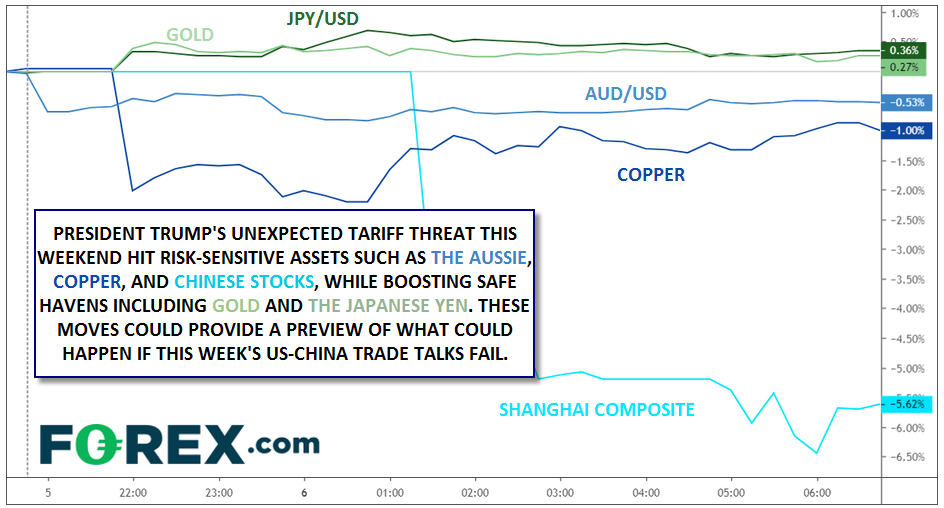 It’s rare to get a “dress rehearsal” in trading, but the moves we saw at the start of the week give us a preview of what to expect if this week’s talks between the US and China break down. More concretely, another escalation in tariffs could take USD/JPY back to 109.00, AUD/USD below 0.6900 (if not 0.6800), and Gold up toward $1300, in addition to lopping another 10%+ off Chinese stocks and potentially ending this year’s uptrend in US indices.

The market stakes of this week’s negotiations couldn’t be higher – will US and Chinese negotiators be up to the task?