As expected, the European Central Bank has decided to leave its monetary policy unchanged: the main refinancing rate has been kept at zero, deposit facility rate at -0.40% and marginal lending rate at 0.25%. The attention will be on the ECB President Mario Draghi, who will be speaking at the press conference at 13:30 GMT.

As expected, the European Central Bank has decided to leave its monetary policy unchanged: the main refinancing rate has been kept at zero, deposit facility rate at -0.40% and marginal lending rate at 0.25%. The attention will be on the ECB President Mario Draghi, who will be speaking at the press conference at 13:30 GMT. A couple of issues that will need to be clarified include the possibility of tapering QE early in the face of rising inflation and the scarcity of bonds. In the statement, the ECB has reiterated that the QE stimulus programme can be increased in size and duration if economic outlook worsens and that the governing council “continues to expect the key ECB interest rates to remain at present or lower levels for an extended period of time." Thus, there were no hints of tapering QE early in the statement but Mario Draghi may nevertheless provide some clarity on this issue at the presser.

With the probability of a march Federal Reserve rate hike being at 100%, one would expect the EUR/USD to weaken if Mario Draghi were to dismiss the prospects of an early tapering of QE. However, one has to also consider the possibility that a Fed rate increase is potentially fully priced in and so too is a dovish ECB. Thus, the EUR/USD may not necessarily move significantly lower. The market will want to know how aggressive or otherwise the Fed may be in tightening its belt after March. The Fed may provide an answer next week. Therefore, there is a possibility that the EUR/USD may stage a short squeeze rally, possibly during or after the ECB press conference today, even if Mario Draghi were to dismiss an early taper. The nonfarm payrolls report on Friday will need to show a strong print for the dollar to maintain its bullish bias. Perhaps the focus will be on wages growth and if that disappoints then the USD may fall on profit taking ahead of the FOMC meeting next week.

The EUR/USD’s technical outlook remains murky ahead of the ECB. That brief break below the 1.0460-1.0525 long-term support area at the start of the year means it is possible that the market decided then that the EUR/USD should not be this weak and that it has found a bottom. However, the resulting relief rally hasn’t been significant, with the EUR/USD rising only about 300 pips north of that area before returning to the top of the range in the past couple of weeks. After Friday’s relatively sharp move away from the above-mentioned support range, we were expecting to see some sort of continuation at the start of this week. Well, there was no continuation whatsoever. The EUR/USD briefly broke above Friday’s high, trapped the bulls and then drifted back towards the support range again. Ahead of the ECB presser, the EUR/USD has managed to climb back above Wednesday’s low at 1.0535, which in the very short-term outlook is arguably bullish. The high from Wednesday is still untested at 1.0575. We’d imagine that tops have built up above this level, and above the weekly high at 1.0840. Thus there is a potential for a short squeeze rally later on today. If by the close of play we are still holding above 1.0630/40 area, then this will change the near-term outlook to bullish. For now, the bias is neutral. It will turn decisively bearish if the 1.0460-1.0525 area breaks down conclusively. In that case, at least a re-test of this year’s low at 1.0340ish would become highly likely. 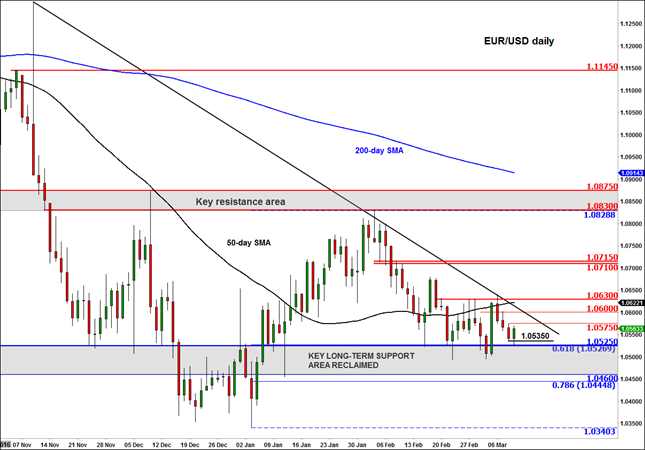