Will GBP/USD rise to re-test highs on Brexit transition deal and BoE?

Aside from renewed market turbulence stemming in part from ongoing political concerns in the US, positive news from the UK and EU on Monday regarding progress on a new Brexit transition deal prompted a strong rally for the British pound.

Aside from renewed market turbulence stemming in part from ongoing political concerns in the US, positive news from the UK and EU on Monday regarding progress on a new Brexit transition deal prompted a strong rally for the British pound. Sterling initially rose sharply against both the weak dollar and the euro before paring some of those gains as the trading day wore on. Brexit negotiators announced tentative agreements between the two sides on major Brexit transition issues, though key concerns regarding the Northern Ireland border remained unresolved. Both sides were optimistic, however, that a final agreement could be signed at the EU leaders summit that is scheduled to begin later this week.

Also occupying the attention of sterling traders this week, of course, are the Bank of England’s rate decision and monetary policy summary scheduled for Thursday, which will be released around the time that the EU summit is slated to begin. Prior to the BoE decision, UK jobs and wage growth data (+2.6% 3m/y expected) will be reported on Wednesday as well as UK CPI inflation data (+2.8% y/y expected) on Tuesday, all of which could have an impact on the central bank’s decision. Though the BoE is not expected to raise interest rates on Thursday, a typically hawkish stance combined with any further UK-positive news from the EU leaders summit could provide an extended boost for the pound.

For GBP/USD, developments surrounding the Brexit deal and Bank of England decision will not be the only potential volatility triggers. The US dollar continues to be weighed down in part by US political and trade policy concerns, most notably the potential for a global trade war that could eventually be sparked by US President Trump’s heavily protectionist stance on import tariffs. Aside from those concerns, the US Federal Reserve will also be front and center this week, with the highly anticipated FOMC rate decision, policy statement, economic projections, and press conference scheduled for Wednesday. Markets are currently pricing-in nearly a 95% chance of a 25-basis-point rate hike. Since there are such high expectations for this hike, the main market focus will shift to the Fed's outlook for further interest rate increases into 2018 and beyond.

Amid this week’s many potential triggers for substantial currency market movement, GBP/USD continues to trade within both long-term and short-term bullish trends. Recently, the currency pair made a tentative breakout above a descending trendline that extends back to January’s 1.4300-area post-Brexit-referendum high. Monday’s surge that was driven by the reported progress of the Brexit transition deal extended this breakout above the 1.4000 psychological level. If GBP/USD is able to maintain this level amid the EU summit, Bank of England decision, and FOMC, the currency pair may be poised to begin targeting a re-test of the noted January highs around 1.4300 once again. 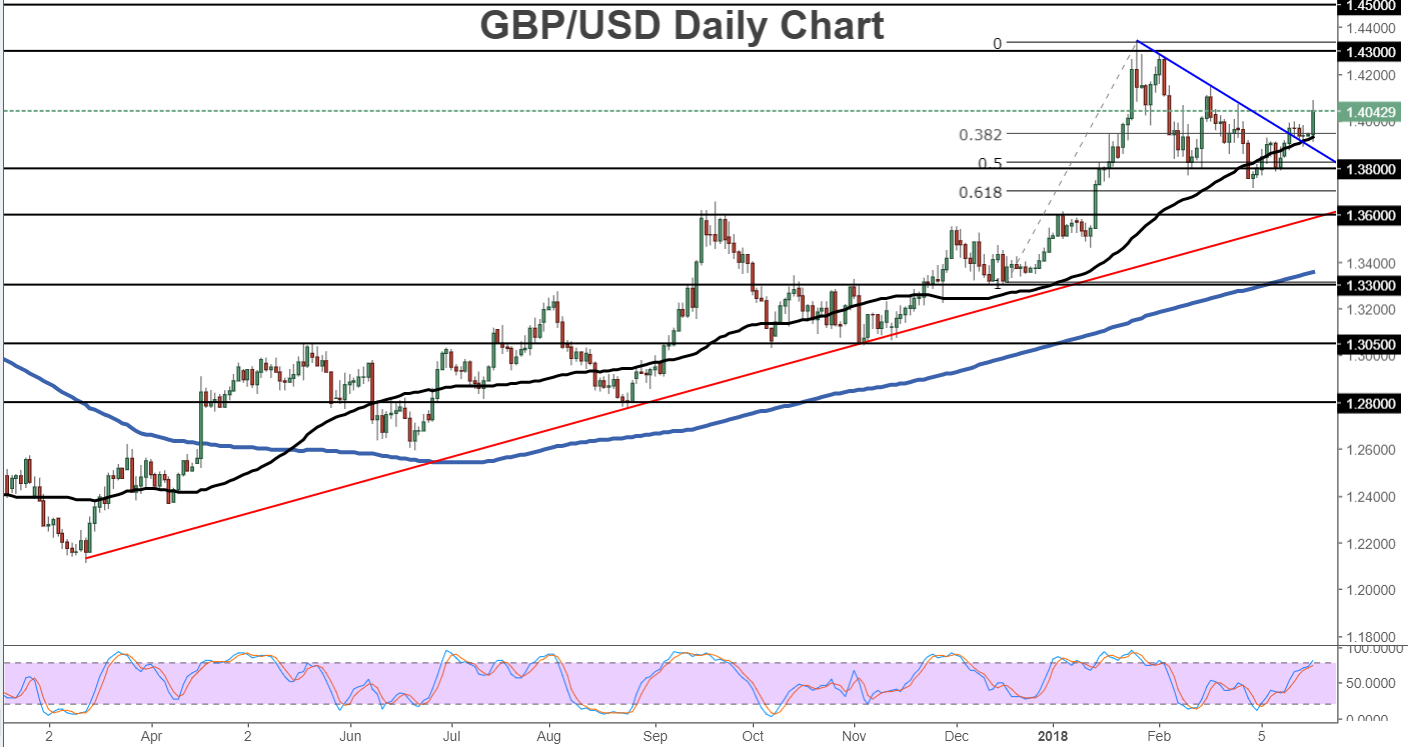