<p>Japanese government officials have been at it again, issuing ominous warnings this week concerning the country’s preparedness to intervene in its objective to weaken the recently strengthening yen. Aside from reiterating the fact that Japan would step in if the yen appreciated further to the point of harming the Japanese economy, officials also provided a target USD/JPY range for possible intervention – between 90.00 and 95.00.</p>

Japanese government officials have been at it again, issuing ominous warnings this week concerning the country’s preparedness to intervene in its objective to weaken the recently strengthening yen. Aside from reiterating the fact that Japan would step in if the yen appreciated further to the point of harming the Japanese economy, officials also provided a target USD/JPY range for possible intervention – between 90.00 and 95.00.

As a result of these warnings, the yen sold-off, which helped to lift USD/JPY further off its new long-term low of 105.54 that was just hit last week. As of Tuesday, the currency pair had climbed up to a high above 109.00 as the yen fell sharply and the dollar remained stable and supported.

Similar warnings by the Japanese government have, in the past, also prompted short-term pullbacks for the yen. The question remains, however, as to whether or not the yen will continue to be restrained based upon intervention warnings alone. Also, even if there is an actual intervention, its sustained success is far from guaranteed. Monetary easing actions by the Bank of Japan in the past, most notably in January, have been unable to maintain any lasting yen weakness. To add onto the strengthening bias of the Japanese currency, last month’s decision by the Bank of Japan to keep rates unchanged and refrain from introducing further easing measures prompted a dramatic surge for the yen, pushing USD/JPY down to new long-term lows.

With a rather concrete USD/JPY range for possible intervention now widely disseminated (the noted 90.00-95.00 range), the potential risk of such an intervention could be further off than previously anticipated. If this is the case, USD/JPY could continue to fall to new lows as the effect of Japan’s warnings subside and until the currency pair gets closer to the stated intervention range.

From a technical perspective, the current rise from last week’s lows has lifted USD/JPY closer to major resistance at the 110.00 psychological level, which is also around where its 50-day moving average is currently situated. In the event of a turn back down around this key resistance, the currency pair could move towards a continuation of the strong downtrend that has been in place since late last year. The key bearish target on any such downside extension continues to be at the 105.00 support objective. 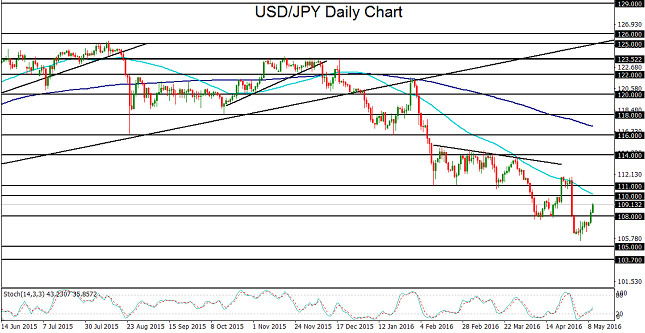