The retreat in WTI Crude Oil prices yesterday has not yet violated its current trend of rebound...

WTI Crude Oil Futures (June contract) retreated 2.3% on day yesterday, the first decline in the last six trading days, after prices nearly doubled from the closing price of $12.34 on April 28.

The U.S. Energy Information Administration (EIA) reported that U.S. crude oil inventories rose 4.59 million barrels in the week ended May 1, less than an increase of 8.67 million barrels expected. In fact, the growth in inventories has been dropping for a third straight week, as shown on the chart above, and the second time in a month that the increase was less than estimates.

It may be reasonable to see some profit taking in oil, given such a rally in a considerably short period of time. However, the retreat in WTI Crude Oil prices yesterday has not yet violated its current trend of rebound.

From a technical point of view, WTI Crude Futures (June contract) maintains its bullish run as shown on the 1-hour chart. Despite a modest pull-back, it remains trading within a rising channel drawn from April 28. In fact, yesterday's day-low was also near the 23.6% Fibonacci retracement level of the rally. Bullish investors might consider $22.55 as the nearest support, while a break above the nearest resistance at $26.05 would open a path to the next resistance at $28.20. In an alternative scenario, a break below $22.55 would trigger a deeper price correction to the next support at $20.00. 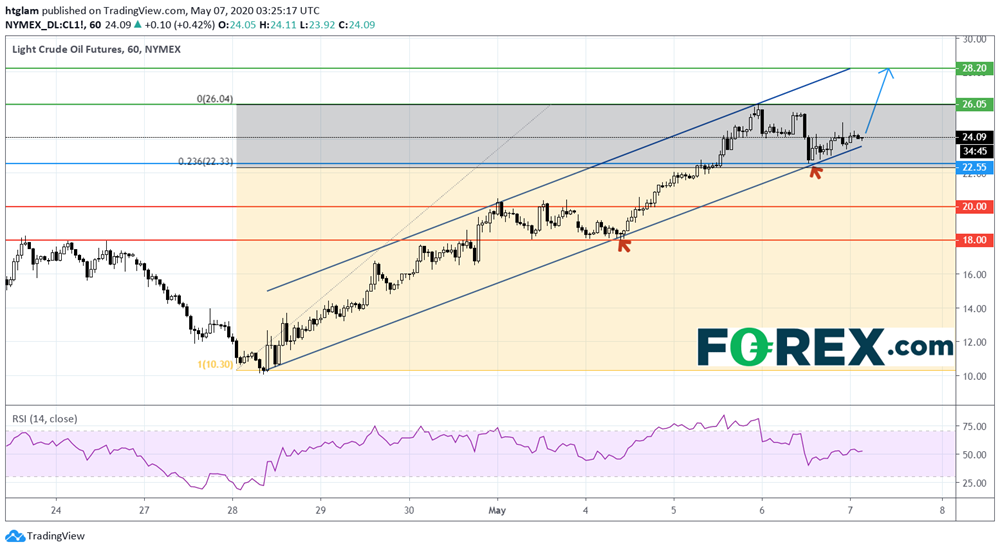