Yikes for hikes if the Fed move faster than expected

What began as ‘just another ripper inflation print’ quickly turned into panic of an emergency hike from the Fed. But just how realistic is that?

As my colleague Joe Perry pointed out, expectations for the Fed to hike by 50 bps at their March meeting rose to around 50% after CPI was released. Yet within hours of the print, traders had pushed the Fed Funds sharply lower to the point this probability rose to a high of 96%. Moreover, traders saw the probability of six 25 bps hikes by the Fed by December by the close of the Day. But, perhaps more interestingly, is that there were also murmurs that the Fed could be forced to hike rates ahead of the next meeting, with some even saying it could be today.

The February contract of the Fed Funds (which expires before the next Fed meeting) priced in a 30% chance of an emergency hike. And when that news did the rounds it seemed to provide investors with another reason to panic, forcing US equity futures down over 2% and the US dollar higher.

Whilst markets are not pricing this in with certainty the fact that they are pricing it in at all does raise a few eyebrows. And, as exciting as an emergency hike may be, there are a few considerations which means it needs to be approached with caution. 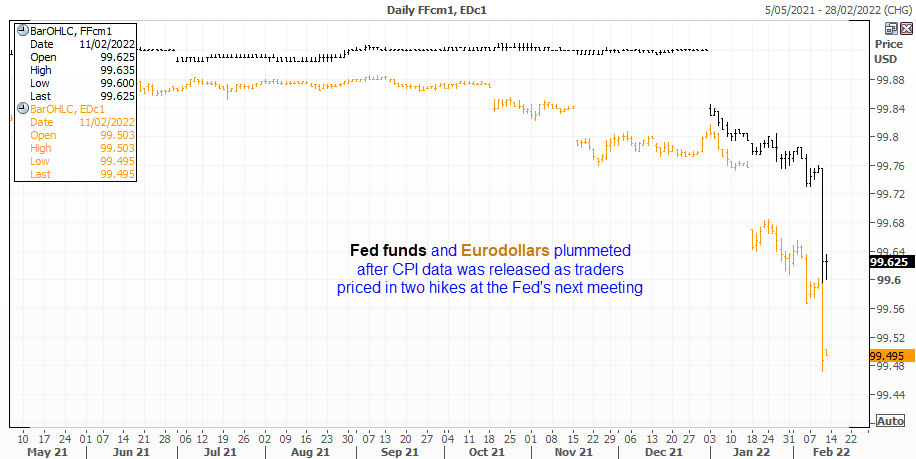 Market reaction aside, an emergency hike may be less probable

Critics of the pending Fed hikes point out that raising rates won’t fix the supply-side disruptions that forced inflation rates up to eye-watering levels. And jumping the gun and hiking ahead of their next won’t fix that issue any quicker. But the Fed are at risk of losing credibility if they do act sooner, as it looks like a knee-jerk reaction to the realisation they have lost control. Moreover, they’re still purchasing assets and haven’t even begun tapering, so to hike now would make them look very weak indeed. Therefore, the odds favour a 50-bps hike at their March meeting and sweaty palms for Fed members leading up to it. Yet it is these lower probability events which can cause the biggest reactions, and therefore something for traders to prepare for, regardless.

An early hike could spark panic and weigh on commodity FX

We know that the Fed are going to be raising rates, but the next few days is about deciphering whether they will pull the trigger early, or not. If they do, it could cause widespread panic for markets and benefit the Japanese yen, and weigh particularly heavily on commodity currencies such as the Australian, Canadian and New Zealand dollars. Put simply, AUD/JPY, NZD/JPY and CAD/JPY are ones to watch for bearish setups if they Fed hike early. 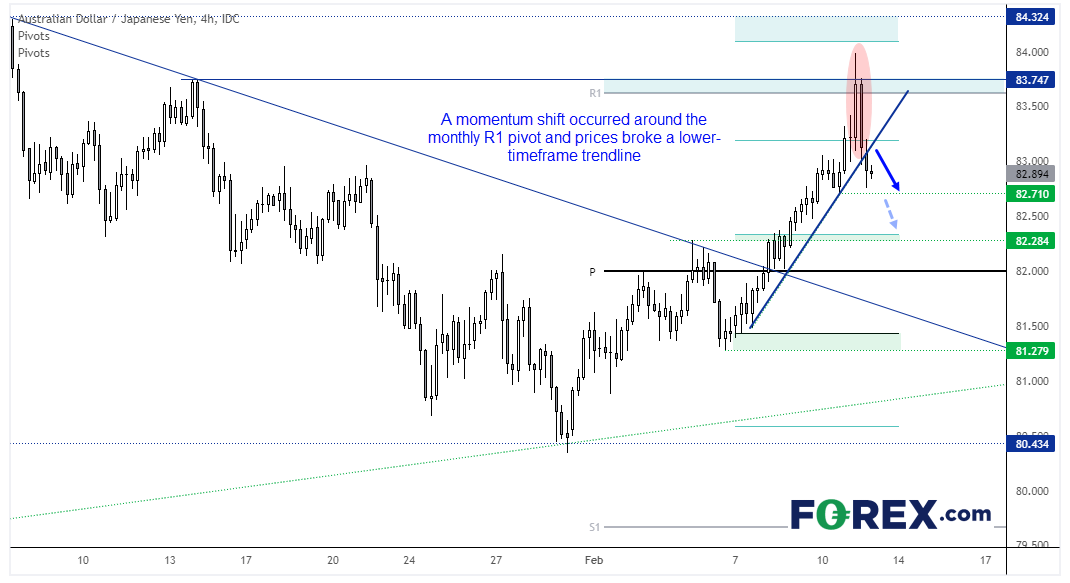 Technically, AUD/JPY is a bit of a mess and not one we are too interested in for longs at present. A volatile 2-bar reversal occurred around the 83.75 high and momentum has since broken a lower timeframe, bullish trendline. If prices can stabilise and risk appetite improve, perhaps it can break back above the weekly R2 pivot around 82.30. Yet with sentiment likely to remain fragile, we’d prefer to fade into minor rallies up to 82.30, where a break below 82.70 likely marks a much deeper selloff.

USD/JPY is more appealing to bulls for a March hike

Yet it is not a clean cut with USD/JPY as gain safe haven flows whilst the dollar would be supported by said hikes. We’re currently bullish on USD/JPY on the premise that the Fed don’t hike early, but would revert to a neutral stance if they do. USD/JPY proved its YTD yesterday and remains in an uptrend on the daily chart. RSI (14) is confirming its recent move higher, although RSI (2) is overbought being above 90, which warns of near-term exhaustion over the short-term. We should also factor in that the weekly R3 and monthly R1 pivot points reside just above yesterday’s high so, unless we see immediate follow-through from bulls today the pair does appear at risk of a pullback from current levels. But if prices can break above 116.50 then we’ll remain bullish up to 117.00 and see how prices react from a long trendline projected form the 1998 high.