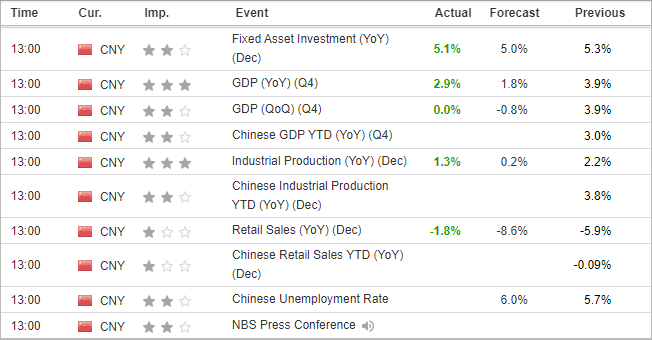 China’s economy rose at an annualised rate of 3% in 2022 according to official data. Whilst this is the lowest rate in decades (and second lowest since the 70s) it still surpassed expectations, which were dampened due to extended periods of lockdowns last year. GDP was forecast to contract by -0.8% q/q yet managed to scrape a ‘flat’ of 0%, and the y/y rate rose 2.9% compared with 1.8% forecast and down from 3.9% previously. Retail sales contracted for a third month but, at -1.8%, it was much better than the -8.6% expected and -5.9% previously. Fixed asset investment also rose 5.1% y/y compared with 5% forecast, down from 5.3% previously. Unemployment was arguably the bigger surprise by rising to 6%, up from 5.7%.

No, these numbers are not great but are they not terrible either. China has effectively abolished their covid-zero strategy and continued to provide stimulus for parts of the economy that were struggling, which helps retain hopes of a soft landing. But at the same time, we have entered 2023 expecting global growth to deteriorate and Q4 data certainly keeps that concern alive and well.

Recent trade data showed China’s global exports plummeted -10% y/y as global demand waned, and exports to the US fell -20% y/y. Yet whilst China’s trade collapsed in US dollar terms, it is effectively treading water in yuan terms thanks to the weaker currency – with exports down just -0.5% y/y and imports up 2.2% y/y. But with such weak numbers even in yuan terms it provides little reason for China to want a stronger currency, and the powers that be may seek to cap extended periods of weakness.

However, USD/CNH may be oversold over the near-term

With that said, USD/CNH has fallen much further from its 2022 highs than the US-CN 2-year differential, which begs the question as to whether the pair is oversold over the near-term. Furthermore, USD/CNH fell -9.2% from the October high to this week’s low, and the 200-week EMA has provided technical support. The bearish trend has also staled near a prior congestion area which can provide reliable zones of support or resistance. Momentum is now trying to turn higher and retrace against recent heavy losses. We are therefore cautiously bullish on USD/CNH whilst prices remain above this week’s low and see the potential for it to rise to the 6.830 high or 6.900 level. 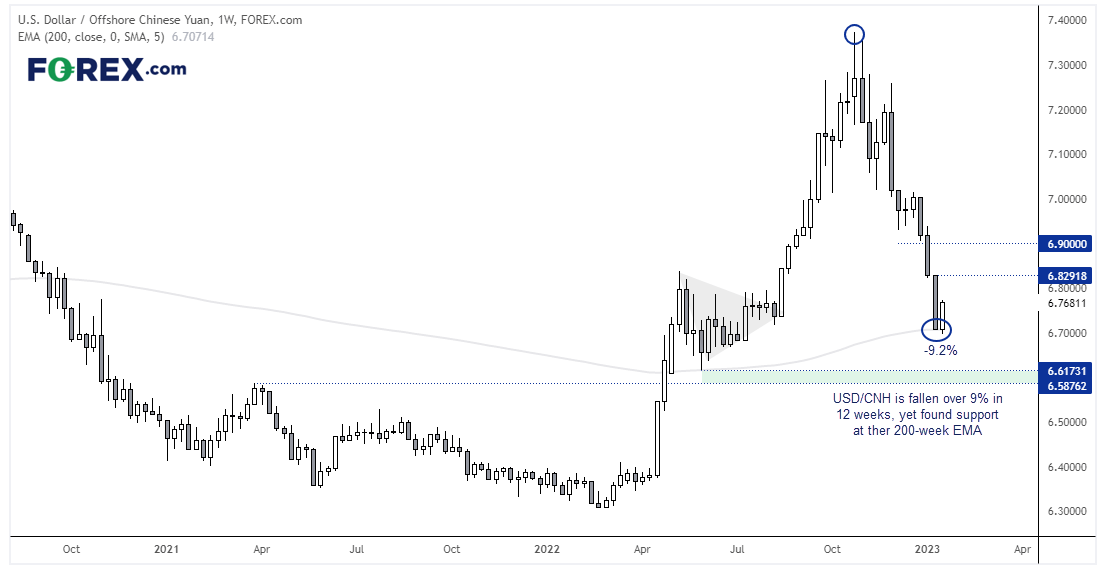 A bullish engulfing candle formed on the daily chart yesterday to mark a potential swing low, and prices have continued higher today. The RSI (14) was recently oversold, although no bullish divergence has formed to suggest the final price low has been seen. Given the likelihood that Beijing wants a weaker yuan to boost exports, I doubt we’ll see USD/CNH break above 6.900 aby time soon unless of course the Fed hint at a higher terminal rate for longer. The 6.830 and 6.900 targets are seen as part of a countertrend move before it rolls over and break to new lows. 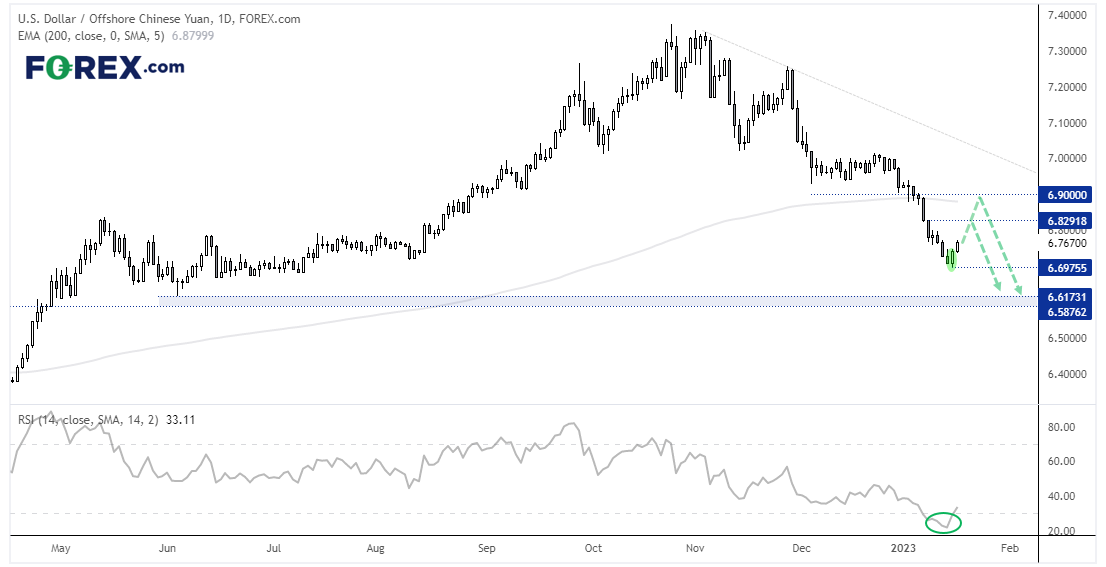