Last week, hopes were running high that the critical “Cyber 5” days between Thanksgiving and Cyber Monday would show record retail sales figures, but the early results we’re seeing point to a slight disappointment. According to the Adobe Digital Economy Index, US consumers are estimated to have spent $10.7B on Cyber Monday, a -1.4% decline from last year’s reading. This comes on the back of a similarly slight decline in Black Friday spending, which is estimated to have fallen to $8.9B from $9.0B last year.

So what happened? Why are consumers reining in spending?

Well, for one, they may not be spending less, but rather spending earlier. According to the same Adobe Digital Economy figures, online consumer spending through the first four weeks of November actually rose over 20% this year to $7.6B! In other words, US consumers appear to have accelerated their purchases to earlier in the month to avoid the risk of shipping delays amidst the ongoing global supply chain disruptions.

In a related development, retailers have been more cautious about offering deep discounts as their own costs are rising. According to Salesforce, the average Cyber Week discount for all the goods it tracks was 23%, down from 30%+ in previous years. With less dramatic price cuts than in previous years, consumers may have opted to hold off on big ticket purchases at the margin.

Finally, it’s worth noting that these so-called “real time” measures of sales data are notoriously volatile and prone to revisions, so readers should take any early analysis with a big grain of salt; in fact, there are even some alternative estimates that this weekend’s retail sales have risen modestly relative to past years. Regardless, it looks like this year’s Cyber 5 sales were not the blowout figures some analysts were expecting, and that, along with the uncertainty around the Omicron variant, has traders exercising caution this week.

Of course, when any time you’re talking about online sales, the proverbial elephant in the room is Amazon.com (AMZN). Despite a strong year for the overall indices, the massive retailer is trading unchanged from its September 2020 peak after failing to garner any meaningful momentum over the last 15 months.

Moving forward, the key level to watch for AMZN will be around $3500. This critical area served as resistance for prices through the first half of the year, then support in mid-July, then resistance again in September, and now appears to be providing a modicum of support for “The Everything Store.” If the $3500 area is conclusively broken, AMZN could quickly fall toward its 200-day EMA near $3350 next. 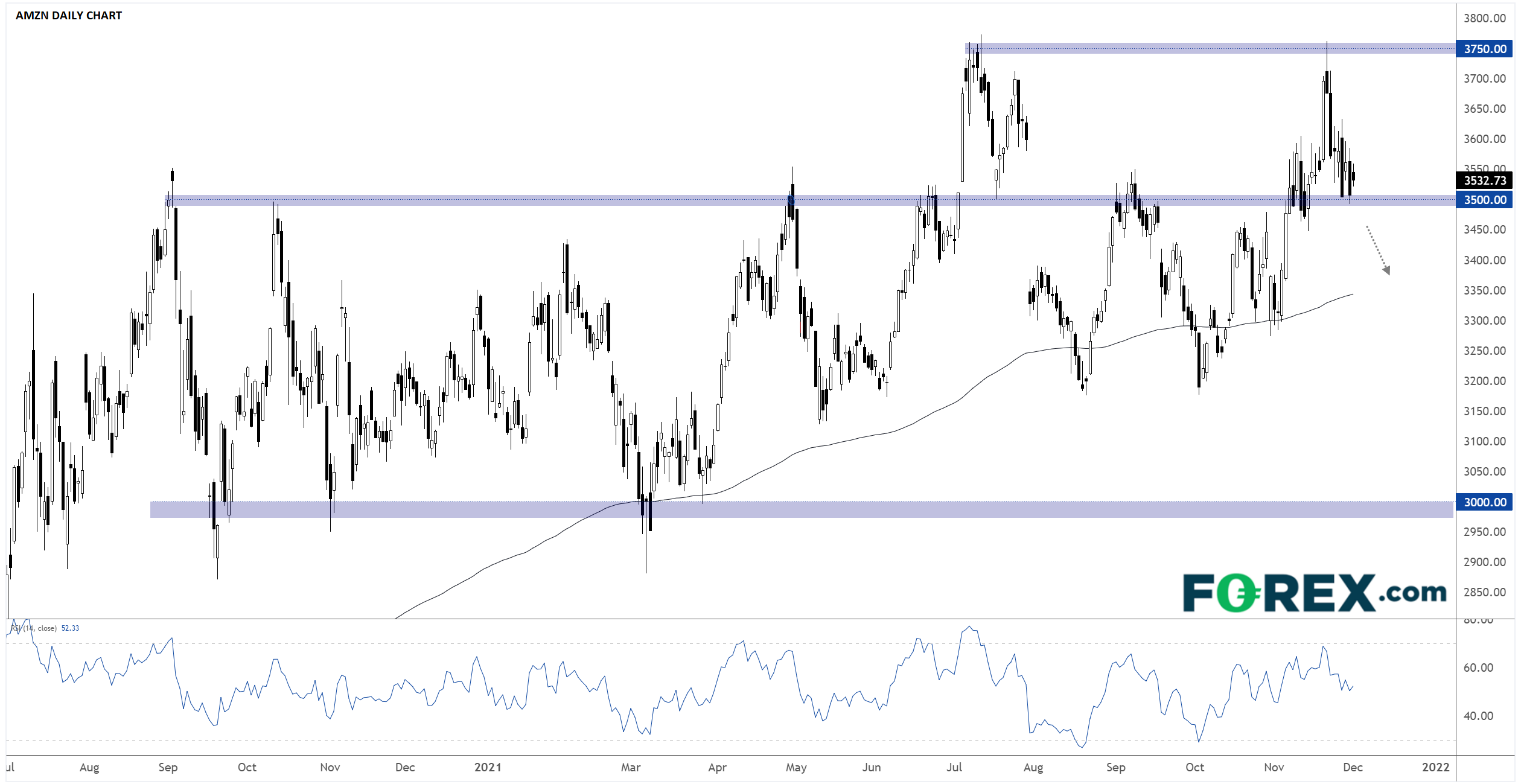 Tesla: Will Twitter remain a drag on TSLA stock?
By:
Joshua Warner

Nvidia’s (NVDA) near-60% rally could struggle at this resistance zone
By:
Matt Simpson

Big Tech layoffs: Is the US job market starting to crack?
By:
Joshua Warner