The European stock markets and the single currency continue to receive support from risks that, well, didn’t materialise. The euro thus remains supported for now, especially against currencies where the central bank is deemed to be slightly more dovish than the ECB – among others, the pound.

Investors have been reducing some of the risks they had built into asset prices, including a sharp recession and energy crunch. But thanks to milder temperatures across Europe, fears over gas shortages haven’t materialised. Meanwhile economic data has generally bettered analyst expectations, reducing fears that the economic downturn is going to be very severe.

The euro has been further supported by hawkish comments from the ECB President Christine Lagarde who in December said the market should be expecting the central bank to raise interest rates at a 50 basis-point pace “for a period of time.” Meanwhile, the split in the BoE’s rate setters suggests the hiking cycle in the UK could be coming to an end sooner than the ECB’s.

As the gap between monetary policies in the UK and Eurozone narrows, this should keep the downside for EUR/GBP limited. 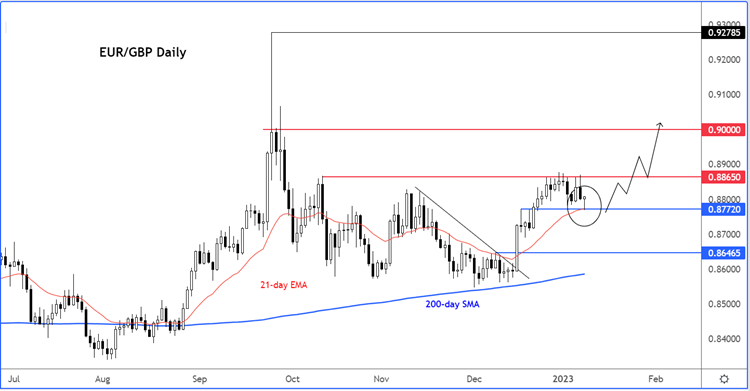 Meanwhile, the technical trend for the EUR/GBP is bullish. We can see that the 21-day exponential moving average is above the 200-day simple average, with the slope of both being positive. Price is holding above both, confirming that the bulls are in charge.

With the trend being bullish, the path of least resistance is to the upside. As such, we could well see more gains for this pair in the days and weeks to come.

It is essential though that support levels such as 0.8770ish hold now to keep the momentum positive. If it holds, we could see a break above 0.8865 next, which has been a tough nut to crack. A move north of this level paves the way for a potential run towards 0.90 handle next.

However, if support and the 21-day exponential average around 0.8770ish break down on a closing basis then this could pave the way for a deeper retracement towards 0.8645/50 area next, the base of the breakout in December.